Horse Ends Up Inside Car In Shocking Collision in Jaipur. Cricketers Win ‘Calves’, Not Trophies at Vadodara Tournament. Here is What Happened at the ‘Not So Perfect’ Wedding. Govt In Denial Of Deaths Caused Due To Pollution? These Quick and Easy Drinks will Lift your spirits. The Letter L Song - Alphabet Songs for kids - Nursery Rhymes by Kids Yogi. UPSC Exam Results for 2016 Declared, Karnataka’s Nandini KR Tops. Helpless Mother Offers Kidney For Sale To Pay School Fees. Caught on Cam: Whistle Blower of Delhi PWD ‘Scam’ Attacked. A Ride in India's First Self-Driving Vehicle, the Novus-Drive. ‘Mahants’ View Yogi’s Ayodhya Visit as a Sign of ‘Acche Din’ Jaguar Art of Performance Tour Experience. Students Bemoan Violence at IIT Madras over ‘Beef Fest’ Top news of the day and much more in the world of entertainment, sports and lifestyle: Join us. Insensible That Muslim Personal Law Isn’t Codified: Arif Mohd Khan. Trump commemorates Martyrs at Arlington National Cemetery on US Memorial Day.

India is Not More Peaceful Or Stronger Than In 2014: Chidambaram. Modi@3: Amit Shah Praises NDA Government, Congress Rebuts. The Quint: Opposition discusses Prez Candidate at Sonia Gandhi’s Lunch-Meet. The Quint: YouTuber Carries Dog Around in a Baby Sling. Take a Bath Before Meeting Yogi: Officials to Villagers. The Quint: 2017 Maruti Suzuki Dzire Review: Does the New Style Work? The Quint: Burhan Wani’s Successor Killed in Tral: Who Was Sabzar Bhat? The Quint: Lightening strikes and fierce storm kills 23 in Bihar. The Quint: Kerala Congress Men Slaughter Calf at Event, Rahul Condemns Act. The Quint: Indian Govt Says No to Indo-Pak Cricket Series. The Quint: Zika cases in India: Here’s all you need to know about the virus.

What a Week it Was: A Quick Look's at This Week's Entertainment Stories. The Quint: Daring Slacklining, Woman Washed out to Sea by a 40-Foot High Wave. The Quint: 13 Big Stats From IPL Season 10. The Quint: Real Madrid's La Liga Title Celebrations. The Quint: Minor Boys Stripped and Paraded Naked for Allegedly Stealing Treat.

The Quint: Multiple ATMs Shut Across The Country As Precaution to ‘WannaCry’ The Quint: Mumbai airport becomes world's busiest single-runway airport. The Quint: Rhea and Sonam Kapoor Get Candid About Rheson. The Quint: The weirdest career advice you got for not following your passion! The Quint: A Weighty Problem on Young Shoulders; This Child Can’t Stop Eating. You will Never Guess Who Chetan Bhagat Wants his Half Girlfriend to be! 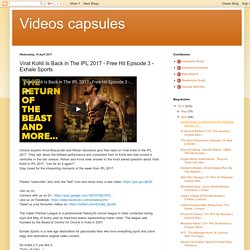 They talk about the brilliant performance and consistent form of Kohli who had scored 4 centuries in the last season. Rohan and Amol seek answer to the most asked question about Virat Kohli in IPL 2017, "can he do it again? ".Stay tuned for the interesting moments of the week from IPL 2017. Please "subscribe" and click the "bell" icon and never miss a new video: Join us on:Connect with us on G+: Like us on Facebook: us your favourite videos on: The Indian Premier League is a professional Twenty20 cricket league in India contested during April and May of every year by franchise teams representing Indian cities. Exhale Sports is a new age destination for passionate fans who love everything sport and crave edgy and alternative original video content. Do share it if you like it. Videos capsules: Best Moments of IPL - Free Hit Episode 2 - Exhale Sports. Amol Muzumdar and Rohan Gavaskar talk about Hardik Pandya's brilliant performance and consistent form and they call him a superhero Kung Fu Pandya. 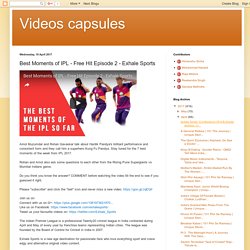 Stay tuned for the 7 best moments of the week from IPL 2017. Rohan and Amol also ask some questions to each other from the Rising Pune Supergiants vs Mumbai Indians game. Do you think you know the answer? COMMENT before watching the video till the end to see if you guessed it right. Please "subscribe" and click the "bell" icon and never miss a new video: Join us on:Connect with us on G+: Like us on Facebook: us your favourite videos on: The Indian Premier League is a professional Twenty20 cricket league in India contested during April and May of every year by franchise teams representing Indian cities.

Exhale Sports is a new age destination for passionate fans who love everything sport and crave edgy and alternative original video content. Do share it if you like it. Videos capsules: The Story of Asia's Greatest Rivalry - Mohun Bagan vs. East Bengal - Kolkata Derby - Exhale Sports. Kolkata Derby the story released by Exhale Sports. 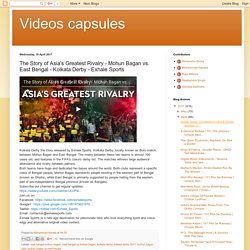 Kolkata Derby, locally known as Boro match, between Mohun Bagan and East Bengal. The rivalry between these two teams is almost 100 years old, and features in the FIFA's classic derby list. The matches witness large audience attendance and rivalry between patrons.Both teams have huge and dedicated fan bases around the world.

Both clubs represent a specific class of Bengali people, Mohun Bagan represents people existing in the western part of Bengal (known as Ghotis), while East Bengal is primarily supported by people hailing from the eastern part of pre-independence Bengal province (known as Bangals). Subscribe our channel to get regular updates: us on:Facebook: contactus@exhalesports.comExhale Sports is a new age destination for passionate fans who love everything sport and crave edgy and alternative original video content. Videos capsules: Predictions for Upcoming Manchester Derby - Manchester City vs Manchester United - Exhale Sports.

The Manchester derby refers to football matches between Manchester City and Manchester United, first contested in 1881. 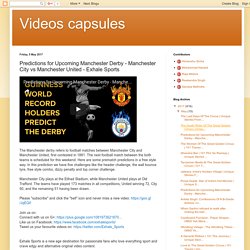 The next football match between the both teams is scheduled for this weekend. Here are some prematch predictions in a free style way. In this prediction we have five challenges like the header challenge, the wall bounce tyre, free style combo, dizzy penalty and top corner challenge. Manchester City plays at the Etihad Stadium, while Manchester United plays at Old Trafford.

The teams have played 173 matches in all competitions, United winning 72, City 50, and the remaining 51 having been drawn. The Quint: Ekta Kapoor’s Reactions to Comments on ‘Dev DD’ are Hilarious. The Quint: Losing Network18 Was Like Losing My Identity. The Quint: Family of Conjoined Twins in Pak Pray for Successful Operation. Cardboard Furniture – Paper Shaper – OMG! Yeh Mera India – HISTORY TV18. Whistling Village – The Whistling Tribes – OMG! Yeh Mera India – HISTORY TV18. A village of Meghalaya’s Kongthong, where every person has his individual caller tune. 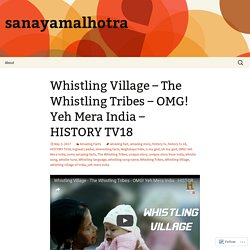 Each person in the village has a name and a unique tune called “ingrwai Lawbei” and this village is also known as the whistling village of India. To know more watch this video. Please LIKE, COMMENT and SHARE this video with your friends. For more OMG! Limbo Skating – Tiluck Keisam – OMG! Yeh Mera India – HISTORY TV18 – vINDeo – Amazing Indian Videos. Meet the 7 years old a boy who can pass from under an obstacle only 12 inches high doing a limbo skating. 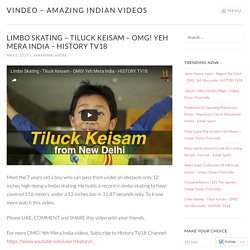 He holds a record in limbo skating to have covered 116 meters under a 12 inches bar in 31.87 seconds only. To know more watch this video. Please LIKE, COMMENT and SHARE this video with your friends. For more OMG! Yeh Mera India videos, Subscribe to History TV18 Channel: Balaknama – A Newspaper Run By Street Children – OMG! Yeh Mera India HISTORY TV18 – vINDeo – Amazing Indian Videos. Balaknama is a Newspaper run by kids. 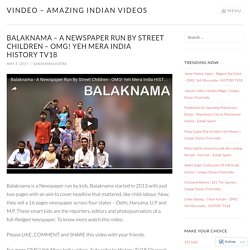 Balaknama started in 2013 with just two pages with an aim to cover headline that mattered, like child labour. Now, they sell a 16 pages newspaper across four states – Delhi, Haryana, U.P and M.P. These smart kids are the reporters, editors and photojournalists of a full-fledged newspaper. To know more watch this video. The Quint: Watch Aizawl FC’s Grand Homecoming After Historic Win. The Quint: Osama Bin Laden Is Dead: The Story Six Years Later. The Quint: Rashid Khan on His Favourite IPL Wickets; Marsh on Amla’s Injury.