Slender Man Connection Wiki. Fandom powered by Wikia. Slender Man - Wikipedia. Stories of the Slender Man commonly feature him stalking, abducting or traumatizing people, particularly children.[1] The Slender Man is not confined to a single narrative, but appears in many disparate works of fiction, typically composed online.[2] Fiction relating to the Slender Man encompasses many media, including literature, art and video series such as Marble Hornets. 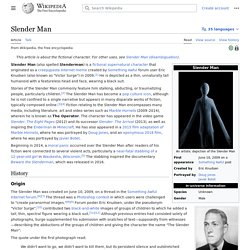 Outside of online fiction, the Slender Man has had impact on popular culture, having been referenced in the video game Minecraft and generated video games of his own, such as Slender: The Eight Pages and Slender: The Arrival. Beginning in 2014, a minor moral panic occurred over the Slender Man after readers of his fiction were connected to several violent acts, particularly a near-fatal stabbing of a 12-year-old girl in Waukesha, Wisconsin. 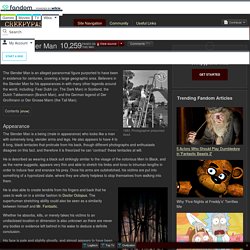 Believers in the Slender Man tie his appearances in with many other legends around the world, including; Fear Dubh (or, The Dark Man) in Scotland, the Dutch Takkenmann (Branch Man), and the German legend of Der Großmann or Der Grosse Mann (the Tall Man). Appearance The Slender Man is a being (male in appearance) who looks like a man with extremely long, slender arms and legs. He also appears to have 4 to 8 long, black tentacles that protrude from his back, though different photographs and enthusiasts disagree on this fact, and therefore it is theorized he can 'contract' these tentacles at will.

He is described as wearing a black suit strikingly similar to the visage of the notorious Men In Black, and as the name suggests, appears very thin and able to stretch his limbs and torso to inhuman lengths in order to induce fear and ensnare his prey. Behavior Gallery. Slender Man - Knowyourmeme. About Slender Man (a.k.a Slenderman) is a mythical creature often depicted as a tall, thin figure wearing a black suit and a blank face. 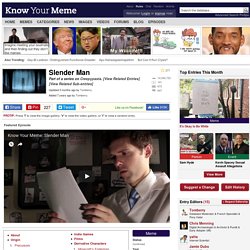 According to the legend, he can stretch or shorten his arms at will and has tentacle-like appendages protruding from his back. Depending on the interpretations of the myth, the creature may cause memory loss, insomnia, paranoia, coughing fits (nicknamed “slendersickness”), photograph/video distortions and can teleport at will. The urban legend has inspired fan arts, fictional creepypastas and a mockumentary series in the style of the 1999 indie horror film Blair Witch Project. As the character has grown in popularity, he’s gained a number of other nicknames including The Operator, Der Großmann, Mr. Origin On June 8th, 2009, a “’paranormal pictures” photoshop contest was launched on the Something Awful (SA) Forums. One of two recovered photographs from the Stirling City Library blaze. Precursors Spread Trender Man Fan Art Fan Videos Marble Hornets 20 Dollars. The Slender Man Mythos (Franchise) "One of two recovered photographs from the Stirling City Library blaze, taken one week earlier. 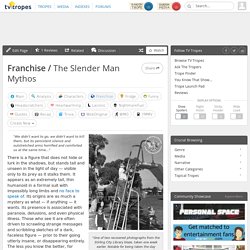 Notable for being taken the day which fourteen children vanished and for what is referred to as The Slender Man. Deformities cited as film defects by officials. Actual photograph confiscated as evidence. " "We didn't want to go, we didn't want to kill them, but its persistent silence and outstretched arms horrified and comforted us at the same time... " There is a figure that does not hide or lurk in the shadows, but stands tall and unseen in the light of day — visible only to its prey as it stalks them. Though most of the images are now gone).

Slenderman Links. This is a list of links to websites and resources as mentioned in my Slenderman articles, published in Darklore volumes 6 and 7. 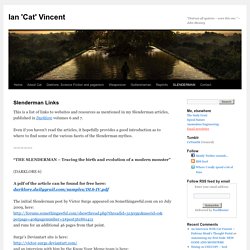 Even if you haven’t read the articles, it hopefully provides a good introduction as to where to find some of the various facets of the Slenderman mythos. “THE SLENDERMAN – Tracing the birth and evolution of a modern monster” A pdf of the article can be found for free here: darklore.dailygrail.com/samples/DL6-IV.pdf The initial Slenderman post by Victor Surge appeared on Somethingawful.com on 10 July 2009, here: and runs for an additional 46 pages from that point. Surge’s Deviantart site is here: and an interview with him by the Know Your Meme team is here: Good sites for a general background intro to the Slenderman phenomena can be found at: (Warning: TV Tropes is one of the most notorious chronovores – eaters of time – online. …and a master list of all known Slenderman sites – live and defunct – is maintained here: EverymanHYBRID Video site Wiki Trailer for Hylo: