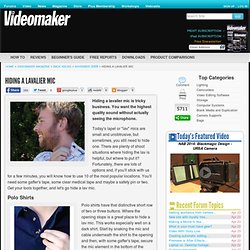 There are plenty of shoot situations where hiding the lav is helpful, but where to put it? Fortunately, there are lots of options and, if you'll stick with us for a few minutes, you will know how to use 10 of the most popular locations. You'll need some gaffer's tape, some clear medical tape and maybe a safety pin or two. Get your tools together, and let's go hide a lav mic. Polo Shirts. 10 most common audio mistakes in documentary filmmaking. 1. 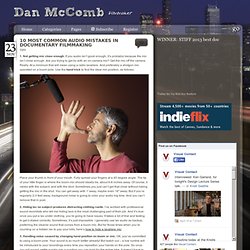 Not getting mic close enough. If you audio isn’t good enough, it’s probably because the mic isn’t close enough. Are you trying to get by with an on-camera mic? Get the mic off the camera. 10 Expenses Most First Time Film Directors Forget. We meet many debut film directors here at Raindance Film Festival HQ. 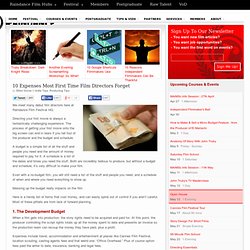 Directing your first movie is always a fantastically challenging experience. The process of getting your first movie onto the big screen can end in tears if you fall foul of the producer and the budget and schedule. A budget is a simple list of all the stuff and people you need and the amount of money required to pay for it. A schedule is a list of the dates and times you need the stuff.

Companies want to film here and they adhere to rules.