Google Maps. Why people fall for dumb Internet hoaxes. (Facebook) Last month brought a great deal of fanfare, and accompanying snarky outrage, about a new “Satire” tag on Facebook for content sources like The Onion. 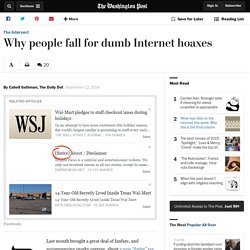 Yet fake “news” items — which run deeper than satire — continue to propagate rapidly across the site, as well as on other social media platforms, such as Twitter. In the past few days, huge numbers of Facebook users saw — and shared — a hoax about severe winter weather from Empire News, predicting “record-shattering snowfall coming soon.” Meanwhile, retweets of a “limited edition” Pumpkin Spice-flavored Durex condom image flooded Twitter timelines. Most media coverage has approached this kind of rapid viral proliferation of fake content as a problem of consumer intelligence, an account both inflammatory and ableist. 1. Both the Empire News winter forecast and the Durex Pumpkin Spice condom were easily falsifiable, but they benefited from a general tendency among social media users to share without reading, let alone verifying. 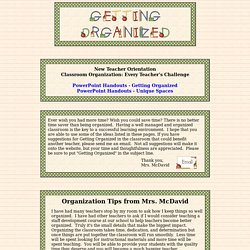 McDavid I have had many teachers stop by my room to ask how I keep things so well organized. I have had other teachers to ask if I would consider teaching a staff development course at our school to help teachers become better organized. Truly it's the small details that make the biggest impact. Organizing the classroom takes time, dedication, and determination but once things are put together the classroom will run smoothly. Materials You Will Need ~ Back to the Top ~ Purge Unused Materials and Non Essential ItemsAs teachers we tend to hoard materials and supplies that we think might come in handy one day. Organizing the Teacher's DeskThe teacher's desk can become a dumping ground for paperwork, papers that need to be filed, correspondence from the main office, items that need to be read or evaluated, and papers that need to be held for future reference. The next step is designating an area to file your paperwork. 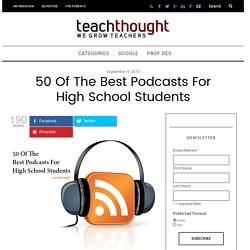 High school is perhaps one of the biggest turning points of a person’s life. Sure, there’s still college after that, but not everyone gets the chance to move that stage forward. So while you’re all in the stage where you go wonder what you really want to be like in the years to come, why not try listening to Podcasts to give yourself some insights about life. So here’s a collection of 50 Podcasts that any high school student should listen to, categorized into the four general topics would help you focus on what you might choose to become in the years to come. Academic Related Podcasts There are things that we can’t just learn in a four walled classroom, which is why these podcasts could offer you more practical applications of the theories they discuss to you. 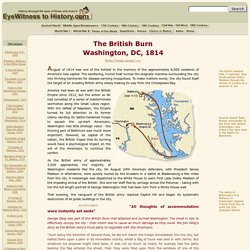 The sweltering, humid heat turned the stagnate marshes surrounding the city into thriving hatcheries for disease-carrying mosquitoes. To make matters worse, the city found itself the target of an invading British army slowly making its way from the Chesapeake Bay. America had been at war with the British Empire since 1812, but the action so far had consisted of a series of indeterminate skirmishes along the Great Lakes region.

As the British army of approximately 4,000 approached, the majority of Washington residents fled the city. That evening, the vanguard of the British army reached Capitol Hill and began its systematic destruction of all public buildings in the city. George Gleig was part of the British force that attacked and burned Washington. ...When the detachment sent out to destroy Mr.