NAU is a cornerstone of higher education, offering flexible degree programs designed for working adults seeking new careers, new adventures and new lives. Now with NAU’s Online college courses you can get the flexibility you need to care for your family, work, have a life and still get a great education. With a wide selection of online degree programs, NAU has a degree for everyone. NAU online will help you achieve your goals whether you are in need of a Diploma, Associate, Bachelor’s, or Master’s degree or even all three.

What Would Linkedin Wear to a Party? How Dress Codes Can Help You Understand What’s Appropriate for Social Media - NAU. It is hard to know sometimes which social media option is right for the occasion. 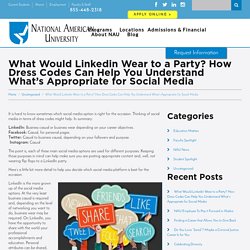 Thinking of social media in terms of dress codes might help. In summary: LinkedIn: Business casual or business wear depending on your career objectives.Facebook: Casual, for personal pages.Twitter: Casual to business causal, depending on your followers and purpose. Instagram: Casual The point is, each of these main social media options are used for different purposes. Here’s a little bit more detail to help you decide which social media platform is best for the occasion. LinkedIn is the more grown up of the social media options. Personal Facebook pages are far more casual than LinkedIn, so enjoy your flip flops and shorts. Twitter is one part news, one part community. The newer kid on the block is Instagram, a mobile photo-sharing, video-sharing, and social networking app. Do You Love “Serial”? Maybe a Criminal Justice Career Is for You - NAU.

Are you a fan of true crime television shows? 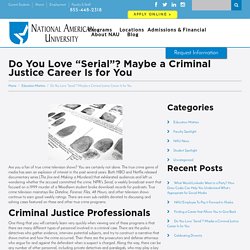 You are certainly not alone. The true crime genre of media has seen an explosion of interest in the past several years. Both HBO and Netflix released documentary series (The Jinx and Making a Murderer) that exhilarated audiences and left us wondering whether the accused committed the crime. Finding a Career that Allows You to Give Back - NAU. NAU Employee To Pay it Forward in Alaska - NAU. NAU employee, Derek Leivestad, spends more time in the air than at a desk for his job with NAU. 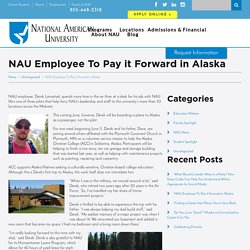 He’s one of three pilots that help ferry NAU’s leadership and staff to the university’s more than 30 locations across the Midwest. Meet Mary Goetz - NAU. Mary's reason for going back to school: to pursue her degree, just like her daughter. 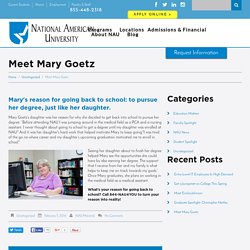 Mary Goetz’s daughter was her reason for why she decided to get back into school to pursue her degree. “Before attending NAU I was jumping around in the medical field as a PCA and a nursing assistant. I never thought about going to school to get a degree until my daughter was enrolled at NAU. " And it was her daughter's hard work that helped motivate Mary to keep going. " Graduate Spotlight: Christopher Nettles - NAU. Dr. 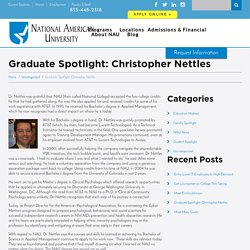 Nettles was grateful that NAU (then called National College) accepted the few college credits he that he had gathered along the way. He also applied for and received credits for some of his work experience with AT&T. In 1995, he received his Bachelor’s degree in Applied Management, which he now recognizes had a direct impact on where he is today. With his Bachelor’s degree in hand, Dr. Meet Ericka Johnson - NAU. Get a Jumpstart on College This Spring - NAU. There are a variety of reasons to start college in the spring, whether you've taken a semester off after high school, you're returning to college as a working adult with a family, or for any number of personal reasons. 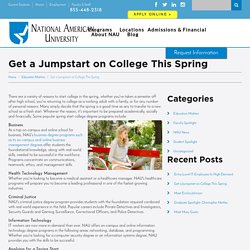 Many simply decide that the spring is a good time as any to transfer to a new school as a fresh start. Whatever the reason, it's important to be prepared academically, socially and financially. Some popular spring start college degree programs include: Entry-Level IT Employees In High-Demand - NAU. ComputerWorld.com recently released its list of the fastest growing IT jobs. 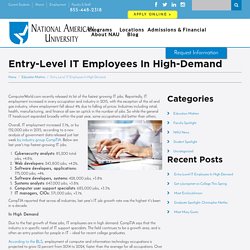 Reportedly, IT employment increased in every occupation and industry in 2015, with the exception of the oil and gas industry, where employment fell about 4% due to falling oil prices. Industries including retail, health, manufacturing, and finance all saw an uptick in the number of jobs. So while the general IT headcount expanded broadly within the past year, some occupations did better than others. 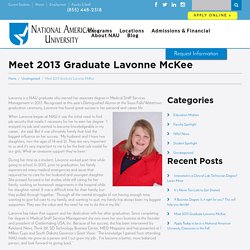 Recognized as this year’s Distinguished Alumni at the Sioux Falls/Watertown graduation ceremony, Lavonne has found great success in her personal and career life. When Lavonne began at NAU it was the initial need to find job security that made it necessary for her to earn her degree. “I enjoyed my job and wanted to become knowledgeable in my career,” she said. But it was ultimately family that had the biggest influence on her success. “My husband and I have two daughters, now the ages of 14 and 21. A Business Degree: Is it right for you? This will help you decide! - NAU. Perhaps you are considering a Business Administration degree to start your career path. 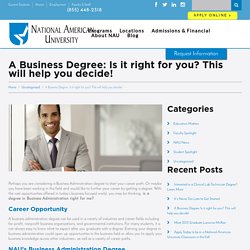 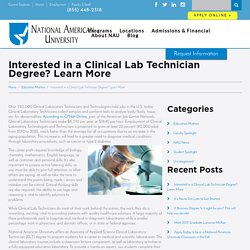 Clinical Laboratory Technicians collect samples and perform tests to analyze body fluids, tissue, etc. for abnormalities. According to O*Net Online, part of the American Job Center Network, Clinical Laboratory Technicians make $8,370 per year, or $18.45 per hour. Employment of Clinical Laboratory Technologists and Technicians is projected to grow at least 22 percent (92,000 jobs) from 2012 to 2022, much faster than the average for all occupations due to an increase in the aging population. Online Schools for Business - NAU. In today’s fast paced world, business has become an essential part of everyday life. Earning your business degree provides you with knowledge that translates across a variety of careers. Nursing Programs in Austin - NAU. Welcome to National American University – Austin, conveniently located on Wells Branch Parkway in the heart of the Austin metro area on Burnet Road right off of N.

Mopac Expressway/Route 1 just south of Route 45. Nearby cities include Round Rock, Texas; Jolleyville, Texas; and Windemere, Texas. Established in 2007, NAU, near downtown Austin, offers excellent Business degree options as well as an excellent IT degree program. Additionally, the campus was recently authorized to offer a Bachelor of Science in Nursing.

Nursing Programs in Sioux Falls ND. Welcome to National American University – Sioux Falls, conveniently located in the southwest part of the Sioux Falls area, near the interchange for Route 29 and Route 229 and accessible via 57th Street. The Sioux Falls location has been serving students in eastern South Dakota since 1974 and is considered one of NAU’s most successful locations. If you're looking for Business, Information Technology, or nursing programs in Sioux Falls SD, look no further than NAU. In addition to its strong Business, Information Technology, and Nursing curricula, the Sioux Falls location offers an excellent Paralegal Studies program along with three allied health programs: Therapeutic Massage, Medical Assisting, and Pharmacy Technician.

Located at the intersection of Interstates 229 and 29, the Sioux Falls location is easily accessible from just about anywhere through nearby major traffic arteries and the city’s bus service. Online Accounting Degree & Accounting Classes Online - NAU. Just like any organization needs a strong accounting and finance team—you need a strong foundation to prepare for your future career. Whether you’re looking for an online accounting degree, or for on-campus instruction, look no further than National American University. NAU’s accounting programs educate you in all of the guidelines and regulations of accounting as well as the four most important areas of accounting: finance, cost, taxation, and auditing.

Information Technology Degree Online - NAU. In order to be relevant in the workplace, you need skills that are relevant to the demands of today’s technology driven world. National American University offers focused Information Technology degree programs both on-campus and online in the areas of networking, database and programming as well as programs for specialized skills in the areas you need to meet the challenges of today’s organizations. Health Information Technology Degree. Your career goals are uniquely your own—and with a career in the healthcare field, you can take many different paths. As a top online healthcare school, NAU offers a wide variety of relevant healthcare programs that equip you with the necessary skills to become an effective and skilled professional in the fast growing healthcare industry.