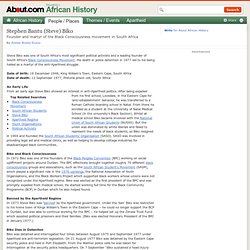 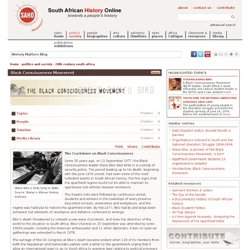 Source: Bailey’s African History Archives The Crackdown on Black Consciousness Some 35 years ago, on 12 September 1977, the Black Consciousness leader Steve Biko died while in a custody of security police. The period leading up to his death, beginning with the June 1976 unrest, had seen some of the most turbulent events in South African history, the first signs that the apartheid regime would not be able to maintain its oppressive rule without massive resistance. The Soweto riots were followed by continuous unrest, students and workers in the townships of every province boycotted schools, universities and workplaces, and the regime was hard put to restore the apartheid order. Biko’s death threatened to unleash a new wave of protests, and drew the attention of the world to the situation in South Africa. 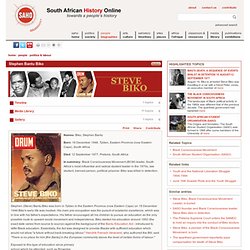 His main pre-occupation was the pursuit of academic excellence, which was in line with his father's expectations. His father encouraged all his children to pursue an education as the only possible route to upward social movement and independence. Biko started his education around 1952 (the exact date varies from source to source) against the background of the Bantu Education Act - introduced to stifle Black education.

Essentially, the Act was designed to provide Blacks with sufficient education which would not allow "a future without back-breaking labour. " Hendrik Frensch Verwoerd, who authored the Bill, said "There is no place for him [the Bantu] in the European community above the level of certain forms of labour. " Nelson MANDELA - Lesson plans - Cartoons - Webquests - Videos - Songs. What can we learn from Nelson Mandela to make a difference? - Official WizIQ Teach Blog. 539 Flares Twitter 1 Facebook 532 Google+ 3 LinkedIn 3 inShare3 539 Flares × We teach language to help people communicate. 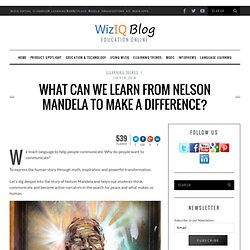 Why do people want to communicate? ​ ​ To express the human story through myth, inspiration and powerful transformation. ​ ​ Nelson Mandela - Facts & Summary. Nelson Mandela was born on July 18, 1918, into a royal family of the Xhosa-speaking Thembu tribe in the South African village of Mvezo, where his father, Gadla Henry Mphakanyiswa (c. 1880-1928), served as chief. 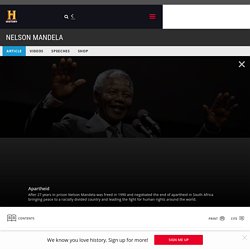 His mother, Nosekeni Fanny, was the third of Mphakanyiswa’s four wives, who together bore him nine daughters and four sons. After the death of his father in 1927, 9-year-old Mandela—then known by his birth name, Rolihlahla—was adopted by Jongintaba Dalindyebo, a high-ranking Thembu regent who began grooming his young ward for a role within the tribal leadership. The first in his family to receive a formal education, Mandela completed his primary studies at a local missionary school.

There, a teacher dubbed him Nelson as part of a common practice of giving African students English names. He went on to attend the Clarkebury Boarding Institute and Healdtown, a Methodist secondary school, where he excelled in boxing and track as well as academics. Nelson Mandela - Biography - President (non-U.S.), Writer, Civil Rights Activist. Nelson Mandela became the first black president of South Africa in 1994, serving until 1999. 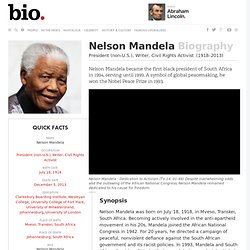 A symbol of global peacemaking, he won the Nobel Peace Prize in 1993. Synopsis Nelson Mandela was born on July 18, 1918, in Mveso, Transkei, South Africa. Becoming actively involved in the anti-apartheid movement in his 20s, Mandela joined the African National Congress in 1942. For 20 years, he directed a campaign of peaceful, nonviolent defiance against the South African government and its racist policies. Nelson Mandela 1918 -2013. Amnesty International paid tribute today to one of the world’s most visionary leaders in the fight to protect and promote human rights, Nelson Mandela. 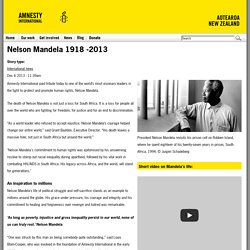 The death of Nelson Mandela is not just a loss for South Africa. It is a loss for people all over the world who are fighting for freedom, for justice and for an end to discrimination. “As a world leader who refused to accept injustice, Nelson Mandela’s courage helped change our entire world,” said Grant Bayldon, Executive Director. Robben Island. Documentary Nelson Mandela The Fight For Freedom - Documentary BBC. 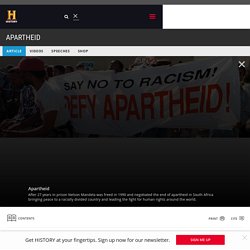 Why not? We are currently working on adding more TV providers. Please check back frequently to see if your TV provider has been added. Why do I need to log in to watch some video content? Viewers who verify their subscription to a TV provider get access to a deeper catalog of video content, including more full episodes. I am able to watch on TV. This service is only available through participating TV providers. How much does it cost to access all of the video content? Nelson Mandela's Life Story. Apartheid. Dossier histoire de l' Apartheid : Sommaire. Colonisée par les Néerlandais au XVIIe siècle et devenue dominion britannique en 1910, l’Afrique du Sud possède déjà un lourd passé de discrimination raciale lorsqu’est mis en place l’apartheid. 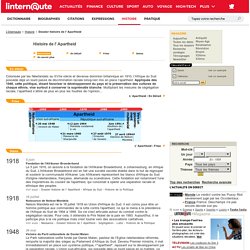 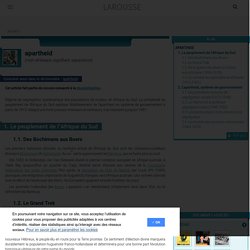 South African mines are world leaders in the production of diamonds and gold as well as strategic metals such as platinum. The climate is mild, reportedly resembling the San Francisco bay area weather more than anywhere in the world. South Africa was colonized by the English and Dutch in the seventeenth century. English domination of the Dutch descendents (known as Boers or Afrikaners) resulted in the Dutch establishing the new colonies of Orange Free State and Transvaal. The discovery of diamonds in these lands around 1900 resulted in an English invasion which sparked the Boer War.