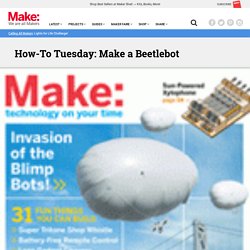 By Jérôme Demers The Beetlebot is a very simple little robot that avoids obstacles on the floor without using any silicon chip — not even an op-amp, and certainly nothing programmable. Two motors propel the bugbot forward, and when one of its feelers hits an obstacle, the bot reverses its opposite motor to rotate around and avoid it.

The project uses only 2 switches, 2 motors, and 1 battery holder, and it costs less than $10 in materials (or free, with some scrounging). 1.5V motors (2) You can often scavenge these from toys, dollar store fans, etc. Round plastic lid I used a lid from a container of hair gel, but you can also use a peanut butter jar lid or anything similar. Fig. Beetlebot in 10 Easy Steps Cut pieces of heat-shrink tubing and use a heat gun or other high-heat source to shrink them onto the motor shafts.

Make: DIY Projects and Ideas for Makers. La Coccinelle. SPDT switch. Beetlebots - Make: Step #1: PrevNext Cut pieces of heat-shrink tubing and use a heat gun or other high-heat source to shrink them onto the motor shafts.Trim the tubing evenly, with a little bit running past the ends of the shafts. 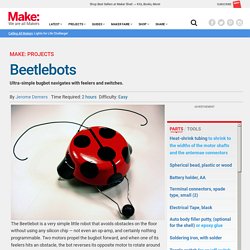 These will act as tires, improving traction. Step #2: Glue the SPDT switches to the back of the battery holder, at the end with the wires. Step #3: Examine or test your motors to determine their polarity.Tape the motors onto opposite ends of the motor plate so that their shafts point down and angle out.Orient their positive and negative contacts so that they’ll spin in opposite directions.Use cyanoacrylate glue or epoxy to glue the motor plate down onto the back of the battery holder, just behind the switches.Orient the motors so that the left motor spins counterclockwise as you view it from below, and the right one spins clockwise.

Step #4: Step #5: Solder together the 2 switches’ NC terminals, which are close or touching.Then solder together their NO terminals, the middle legs. How to Build a Robot - The BeetleBot v2 ( Revisited ) This is the beetle robot instructables revisited a la MythBusters style! 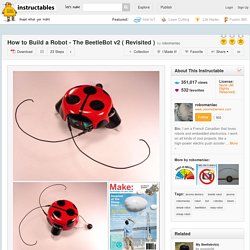 I originally made a instructables about my beetle robot version 1. It is now time to show you a new version of this wonderful robot. This new version is much easier to build and fool proof! The beetle robot (Beetle bot), is a very simple and efficient robot that use no electronics component to avoid obstacle in his path. It use two SPDT switch to avoid obstacles by reversing the opposite motor to pivote and free himself. The major modification is the cross antenna. By having the cross antenna, it also help with the assembly of the robot. Here is a little resume turn into a video. This article was created because I got contacted by a Make editor. After a few month I saw this: Top articles in MAKE 1 - 12. It turns out, that my article was one of the most read of there digital magazine! I took 134 pictures, that is 235Mb of files! Thank you! Jerome Demerswww.JeromeDemers.com.

This is the main component for this robot. 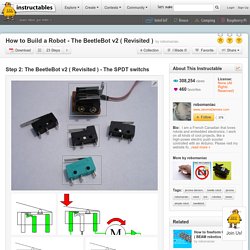 The most expensive. You might get them free or pay from 1$ to 4$ each. the SPDT switchs need to be really sensitive! These switches are the most expensive part of the robot... around 1$ to 4$ each. The one I use are from Cherry. If you recycle old electronic, it might be all FREE! -- edit july 5 2008 I was surfing the website and found this cool His name is Nick and he is 14 years old! At the end of his tutorial, I saw a picture of the blue recycling bin of is municipality - Blainville!