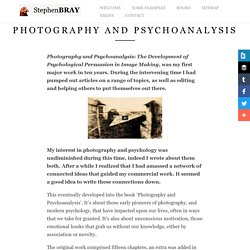 During the intervening time I had pumped out articles on a range of topics, as well as editing and helping others to put themselves out there. My interest in photography and psychology was undiminished during this time, indeed I wrote about them both. After a while I realized that I had amassed a network of connected ideas that guided my commercial work. It seemed a good idea to write these connections down. This eventually developed into the book ‘Photography and Psychoanalysis’. The original work comprised fifteen chapters, an extra was added in the second edition and one more in the third. Book Reviews: Dr. Michael Eldridge, former Head of Post Graduate Studies in Photography at The Arts Institute, Bournemouth: “For the passionate photographer, this little gem of a book will provide a fascinating historical backdrop.

The Mind’s Eye: Freud and Photography. When we think of Sigmund Freud, we think first of words—the “talking cure” of psychoanalysis, books such as The Interpretation of Dreams, and the infamous Freudian slip. 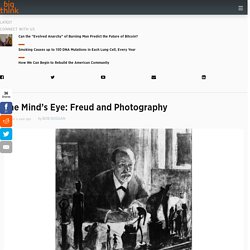 In Mirrors of Memory: Freud, Photography, and the History of Art, Mary Bergstein, Professor in the History of Art and Visual Culture at the Rhode Island School of Design, suggests we should instead think of pictures, specifically photography. “[P]hotography penetrated the cognitive style of Freud and his contemporaries,” Bergstein asserts in decidedly Freudian language, and “documentary photography—of art and archaeology, but also of medicine, science, and ethnography—influenced the formation of Freudian psychoanalysis.” Photography, with its fragmentary and evocative elements, mirrors the way human memory works for Freud. Thus, the mind’s eye, both conscious and subconscious, mimics the photographic lens.

As Bergstein points out early on, many approaches to Freud centered on his reading have been written. Photography and Psychoanalysis: The Development of Emotional Persuasion in Image Making. Psychoanalysis. By Saul McLeod published 2007, updated 2014 Psychoanalysis was founded by Sigmund Freud (1856-1939). 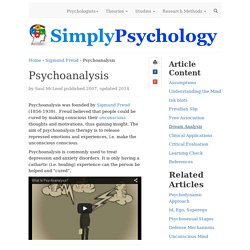 Freud believed that people could be cured by making conscious their unconscious thoughts and motivations, thus gaining insight. The aim of psychoanalysis therapy is to release repressed emotions and experiences, i.e. make the unconscious conscious. Psychoanalysis is commonly used to treat depression and anxiety disorders. It is only having a cathartic (i.e. healing) experience can the person be helped and "cured". Psychoanalysis Assumptions Psychoanalytic psychologists see psychological problems as rooted in the unconscious mind.Manifest symptoms are caused by latent (hidden) disturbances.Typical causes include unresolved issues during development or repressed trauma.Treatment focuses on bringing the repressed conflict to consciousness, where the client can deal with it. How can we understand the unconscious mind? Remember, psychoanalysis is a therapy as well as a theory. 2) Freudian Slip. Freudian Psychoanalytic Theory of Personality. 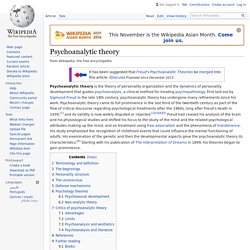 The latter is the older term, and at first simply meant 'relating to the analysis of the human psyche'. But with the emergence of psychoanalysis as a distinct clinical practice, both terms came to describe that. Although both are still used, today, the normal adjective is psychoanalytic.[7] Psychoanalysis is defined in the Oxford English Dictionary as A therapeutic method, originated by Sigmund Freud, for treating mental disorders by investigating the interaction of conscious and unconscious elements in the patient's mind and bringing repressed fears and conflicts into the conscious mind, using techniques such as dream interpretation and free association. 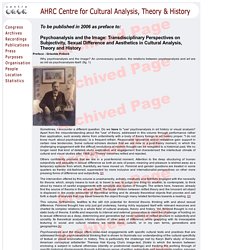 An unnecessary question, the relations between psychoanalysis and art are as old as psychoanalysis itself. (fig. 1) Sometimes, I encounter a different question. Do we have to "use' psychoanalysis in art history or visual analysis? Others confidently proclaim that we are in a post-feminist moment. The intervention offered by this volume is unashamedly, actively, creatively and faithfully engaged with the necessity for theoria: which, simply means to look at, to travel to see, to judge one thing by another, to contemplate, to think about by means of careful engagements with concepts and bodies of thought. This volume, furthermore, testifies to the still rich potential for feminist theoria, thinking with and about sexual difference.