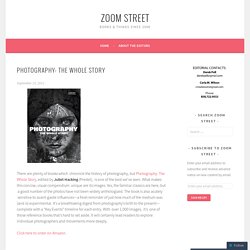 What makes this concise, visual compendium unique are its images. Yes, the familiar classics are here, but a good number of the photos have not been widely anthologized. The book is also acutely sensitive to avant-garde influences—a fresh reminder of just how much of the medium was (and is) experimental. It’s a breathtaking digest from photography’s birth to the present— complete with a “Key Events” timeline for each entry.

With over 1,000 images, it’s one of those reference books that’s hard to set aside. Click here to order on Amazon. Illuminations: Women Writing on Photography from the 1850s to the Present. Web.a.ebscohost. The Power of Photography. Photographers use their cameras as tools of exploration, passports to inner sanctums, instruments for change. 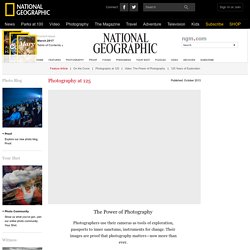 Their images are proof that photography matters—now more than ever. By Robert Draper Thirty-four years before the birth of this magazine, the Danish philosopher Søren Kierkegaard sourly prophesied a banal fate for the newly popularized art of photography. “With the daguerreotype,” he observed, “everyone will be able to have their portrait taken—formerly it was only the prominent—and at the same time everything is being done to make us all look exactly the same, so we shall only need one portrait.”

The National Geographic Society did not set out to test Kierkegaard’s thesis, at least not right away. By wresting a precious particle of the world from time and space and holding it absolutely still, a great photograph can explode the totality of our world, such that we never see it quite the same again. Today photography has become a global cacophony of freeze-frames. Photography and Society in the 20th Century - Introduction, Background, Amateur Photography, The Kodak, The new miniature cameras, Polaroid, Photography without film, Advertising Photography - JRank Articles. 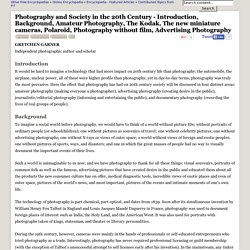 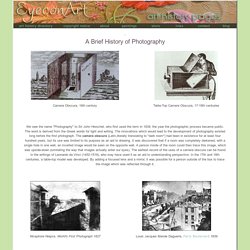 The word is derived from the Greek words for light and writing. The innovations which would lead to the development of photography existed long before the first photograph. The camera obscura (Latin,literally translating to "dark room") had been in existence for at least four hundred years, but its use was limited to its purpose as an aid to drawing. It was discovered that if a room was completely darkened, with a single hole in one wall, an inverted image would be seen on the opposite wall.

It was a French man, Nicephore Niepce (pronounced Nee-ps) who produced the first photograph in June/July 1827. Early Daguerrotypes Couple Holding a Daguerrotype is one of my favorite historical photographs because of its unique commentary on the value of photographs as a record of the real world. History of Photography and the Camera. Updated October 05, 2015. continue reading below our video Niepce placed an engraving onto a metal plate coated in bitumen, and then exposed it to light. 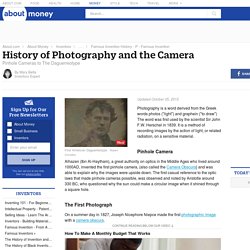 The shadowy areas of the engraving blocked light, but the whiter areas permitted light to react with the chemicals on the plate. When Niepce placed the metal plate in a solvent, gradually an image, until then invisible, appeared. However, Niepce's photograph required eight hours of light exposure to create and after appearing would soon fade away. In 1839 after several years of experimentation and Niepce's death, Daguerre developed a more convenient and effective method of photography, naming it after himself - the daguerreotype.

Daguerre's process 'fixed' the images onto a sheet of silver-plated copper. In 1839, Daguerre and Niepce's son sold the rights for the daguerreotype to the French government and published a booklet describing the process. Talbot sensitized paper to light with a silver salt solution. 20 First Photos from the History of Photography. History of photography. People, Events, Art and Technology - PhotoBox. Photography as a commodity has become a multi-billion dollar industry, made possible by the worlds of fashion, sport and celebrity. 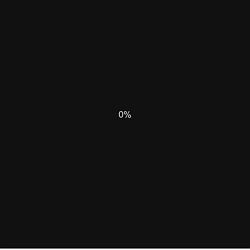 With all artistic respect to the 2000 snaps on your phone, there exists an altogether different breed of photograph, those that have made the jump into a realm where iconography, scarcity and contemporary art meet to generate million-dollar valuations and legendary statuses. Take, for example, ‘Rhein II’, by Andreas Gursky (1999). It’s not known who bought this 12ft-wide, Plexiglass-mounted picture of the Rhine River in Germany for $4.3 million (US) at auction in 2011, but they obviously saw something in it that stirred them.