Natasha Miranda is a Technical Content Writer from Comodo, who writes blogs and articles on internet security. Her posts generally aim to create awareness about a virus, SSL certificates, threats, malware's and firewall.

Why Next Generation Security Software Like NGAV is No Good. Much is written and said about the next generation security software in circulation today. 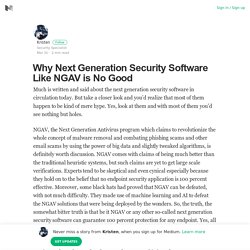 But take a closer look and you’d realize that most of them happen to be kind of mere hype. Yes, look at them and with most of them you’d see nothing but holes. NGAV, the Next Generation Antivirus program which claims to revolutionize the whole concept of malware removal and combating phishing scams and other email scams by using the power of big data and slightly tweaked algorithms, is definitely worth discussion. NGAV comes with claims of being much better than the traditional heuristic systems, but such claims are yet to get large scale verifications. Experts tend to be skeptical and even cynical especially because they hold on to the belief that no endpoint security application is 100 percent effective. Free Online Security Tips. Computer security, we all know, is of paramount importance these days, whether it be a personal computer, used solely for personal purposes or one used for official or business purposes. 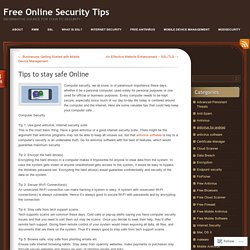 Every computer needs to be kept secure, especially since much of our day-to-day life today is centered around the computer and the internet. Here are some valuable tips that could help keep your computer safe… Computer Security Tip 1: Use good antivirus, internet security suite This is the most basic thing. Have a good antivirus or a good internet security suite. There might be the argument that antivirus programs may not be able to keep all viruses out, but that antivirus software is key to a computer’s security is an undeniable truth. Tip 2: Encrypt the hard drive(s) Encrypting the hard drive(s) in a computer makes it impossible for anyone to steal data from the system. 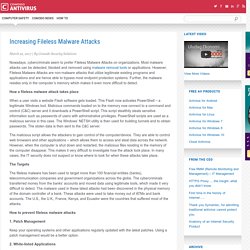 Most malware attacks can be detected, blocked and removed using malware removal tools or applications. However, Fileless Malware Attacks are non-malware attacks that utilize legitimate existing programs and applications and are hence able to bypass most endpoint protection systems. Further, the malware resides only in the computer’s memory which makes it even more difficult to detect. Importance of Antivirus Security in Today’s Era – Kristen – Medium. The enterprise network today is much different from what it earlier was. 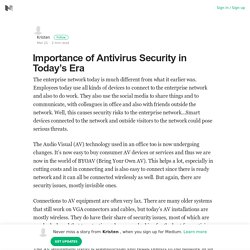 Employees today use all kinds of devices to connect to the enterprise network and also to do work. They also use the social media to share things and to communicate, with colleagues in office and also with friends outside the network. Well, this causes security risks to the enterprise network…Smart devices connected to the network and outside visitors to the network could pose serious threats. New VirLocker Ransomware Campaign That's Giving Experts Headaches. February 14, 2017 | By seo Ransomware is sort of trending in the world of malware and cyber crimes. 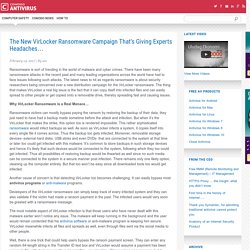 There have been many ransomware attacks in the recent past and many leading organizations across the world have had to face issues following such attacks. The latest news to hit as regards ransomware is about security researchers being concerned over a new distribution campaign for the VirLocker ransomware. The thing that makes VirLocker a real big issue is the fact that it can copy itself into infected files and can easily spread to other people or get copied onto a removable drive, thereby spreading fast and causing issues. Using an Antivirus Program for Your Mac is Important. January 30, 2017 | By Comodo Security Solutions There is the notion among some Mac users that the Mac is immune to viruses and other “nasty things” that are common in the Windows world and hence there is no need of using an antivirus for Mac. 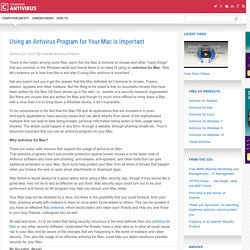 Well, let’s examine as to how true this is and also if using Mac antivirus is important… Ask any expert and you’d get the answer that the Mac definitely isn’t immune to viruses, Trojans, adware, spyware and other malware. But the thing to be noted is that no successful viruses that have been written for the Mac OS have shown up in the wild, i.e., outside of a security research organization. Sign In. Best Virus Scanner and Quick Virus Removal. How Virus Protection Works with Comodo Defence + Technology? 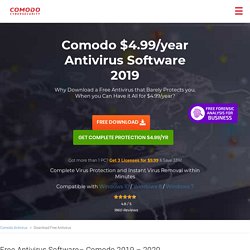 Comdo's trademark Defence + technology, in combination with Host Intrusion Protection System (HIPS) goes beyond the traditional blacklist of programs. Even if a suspicious file type is able to evade the initial blacklisting, Comodo's Defence technology isolates any unknown and potentially hazardous file to run within the Sandbox environment. The Sandbox Technology aids the user to continue working uninterrupted while treating the threats in a quarantined zone. This predictive functionality embedded in Comodo virus protection software gives it a competitive edge over other security software, most of which identify only the known threats. How to Scan & Remove Malware from Your Computer? This video explains the cleaning or removing of virus and malware from your computer using Comodo antivirus software.

Stick On To Windows 7, Protect With Robust Antivirus Solution. January 12, 2017 | By Comodo Security Solutions Do you still love Windows 7? 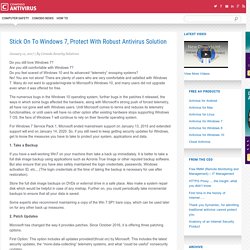 Are you still comfortable with Windows 7? Do you feel scared of Windows 10 and its advanced “telemetry” snooping systems? No! You are not alone! The numerous bugs in the Windows 10 operating system, further bugs in the patches it released, the ways in which some bugs affected the hardware, along with Microsoft’s strong push of forced telemetry, all have not gone well with Windows users. For Windows 7 Service Pack 1, Microsoft ended mainstream support on January 13, 2015 and extended support will end on January 14, 2020. Serious Vulnerability Detected in Kaspersky TLS Interception Tool. January 10, 2017 | By Comodo Security Solutions A serious security vulnerability has been detected in Kaspersky’s TLS Interception Tool. 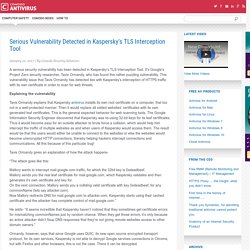 It’s Google’s Project Zero security researcher, Tavis Ormandy, who has found this rather puzzling vulnerability. This vulnerability issue that Tavis Ormandy has detected lies with Kaspersky’s interception of HTTPS traffic with its own certificate in order to scan for web threats. Explaining the vulnerability Tavis Ormandy explains that Kaspersky antivirus installs its own root certificate on a computer, that too not in a well-protected manner. Tavis Ormandy gives an explanation of how the attack happens- “The attack goes like this: Mallory wants to intercept mail.google.com traffic, for which the 32bit key is 0xdeadbeef. Protect Your Windows Computer with Popular Free &amp; Paid Antivirus of 2017 - TechSling Weblog. Microsoft released Windows 10 on the 29th of July, 2015. 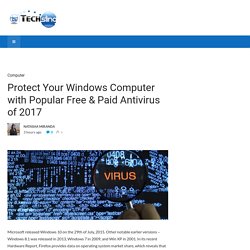 Other notable earlier versions – Windows 8.1 was released in 2013, Windows 7 in 2009, and Win XP in 2001. In its recent Hardware Report, Firefox provides data on operating system market share, which reveals that Win 7 is still used by 45%, Win 10 by 26%, Win XP by 10%, and Win 8.1 by 8% of users. The question of stability, major privacy issues, hardware compatibility, and software compatibility has made users still stick on to older versions of Windows. However, Microsoft ended support for Win XP in April 2009 and for Win 7 in Jan 2015. The popularity of older operating system versions doesn’t seem to wane. 5 Simple Steps to Protect Your PC from Malware &amp; Hackers. July 24, 2019 | By admin Loading... In this world of ubiquitous computers and persistent threats from hackers, protecting your computer is a must. The key pathway through which malware attacks the system is the Internet and its popular service, the Web.

There are numerous ways to protect and remove malware from our computers. No one method is enough to ensure your computer is secure. Popular Free &amp; Paid Antivirus Software of 2017 - TechLinu. Microsoft released Windows 10 on the 29th of July, 2015. Other notable earlier versions – Windows 8.1 was released in 2013, Windows 7 in 2009, and Win XP in 2001. In its recent Hardware Report, Firefox provides data on operating system market share, which reveals that Win 7 is still used by 45%, Win 10 by 26%, Win XP by 10%, and Win 8.1 by 8% of users.

The question of stability, major privacy issues, hardware compatibility, and software compatibility has made users still stick on to older versions of Windows. However, Microsoft has ended support for Win XP in April 2009 and for Win 7 in Jan 2015. The popularity of the older operating system versions don’t seem to wane. Ensuring Security During the Holiday Season and January Sales. It’s not a holiday for hackers when retailers seek to make the most of the holiday season and the January sales. There have been reports of hackers battering E-retailers’ networks, coming from different parts of the world. Different kinds of malware strikes have been reported; these include DDoS (Distributed Denial-of-Service) attacks, POS attacks etc and it seems like hackers are bent on making the most of the sales season with massive data breaches. The Benefits Of Using SSL Technology To Protect Your Website From Security Threats.

There are many different ways that hackers can create a data breach or capitalize on a known vulnerability in network security technology. Having the ability to proactively protect your website and the data transmitted from the website to your server is important both for your business as well as for your customers and employees. While there are comprehensive types of enterprise network security management programs, these are often more sophisticated and more costly than a small to mid-sized business or e-commerce site may require.

It also may be more than a struggling startup or an entrepreneur can justify the budget, at least until they are more established in their business. However, this doesn’t mean there aren’t cost effective, highly beneficial options to consider to build security and protection into your website and for your users. Get Best Virus Protection now for Free. Best Free Antivirus for Windows 7. Cloud-Aware Security Instant Cloud Scanning & Cloud Behaviour Analysist Next Generation Security Virus Free Guarantee, Anti-Virus & Anti-Spyware Infection Defense Auto Sandbox Technology, Default Deny & Defense+ Unmatched User Experience Game Mode, Trusted Installer Detection & Vendor List. Everything You Need To Know About Endpoint Protection And Why It’s Important To Your Business.

SSL Certificates as a Protection Tool for Web Professionals - Web Professionals. As we all know, SSL certificates help protect the information transmitted between the web server and the client. Given the increasing cyber security attacks (and associated media coverage), data breaches and theft of payment processing data, we thought it appropriate to remind readers of the importance of SSL certificates.