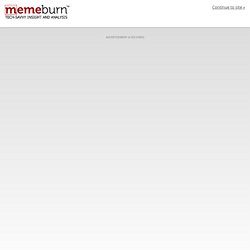 PICS: UCT on lockdown for exams. Cape Town - In scenes more reminiscent of a military quarantine than an examination venue, UCT's sports fields featured massive marquee tents ringed in by crowd-control permeter fencing ahead of examinations set to start on Wednesday. 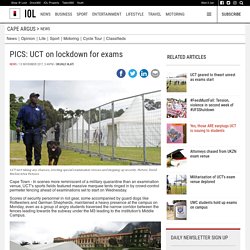 Scores of security personnel in riot gear, some accompanied by guard dogs like Rottweilers and German Shepherds, maintained a heavy presence at the campus on Monday, even as a group of angry students traversed the narrow corridor between the fences leading towards the subway under the M3 leading to the institution's Middle Campus. Access to the campus is being strictly controlled, especially in the light of weeks of violent protests. Vice-chancellor Max Price said the measures were put in place to ensure exams were conducted in a “safe, quiet and calm atmosphere”.

“We have taken this unusual step as a measure of our firm commitment to the huge majority of students who want to write their exams and see the academic year through to its end. Cape Argus. Student injured as sjamboks fly in Stellenbosch college protest. Johannesburg - At least one student was injured in a protest that turned violent at the Elsenburg Agricultural Training Institute in Stellenbosch on Tuesday, as people who tried to enter lecture halls were sjambokked. ''This morning higher-certificate students locked a lecture hall for a test,'' a student told News24. ''Management asked them to open it and got their own bolt cutters and managed to cut the chain off the gate. ''But as they started opening the door, there was resistance from the EFF [Economic Freedom Fighters]. 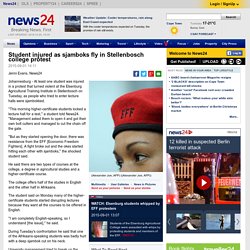 A fight broke out and the okes started hitting each other with sjamboks,'' the shocked student said. He said there are two types of courses at the college, a degree in agricultural studies and a higher-certificate course. WP292. Op-Ed: Student protests, an indictment of “post-apartheid” South Africa. [This article first appeared on Creamer Media’s website: polity.org.za] The student protests of 2015 rocked the country and forced significant concessions by university authorities and the government. 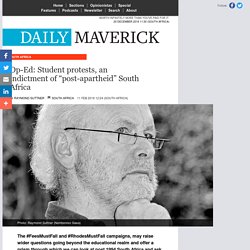 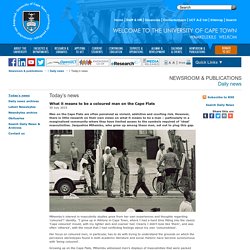 However, there is little research on their own views on what it means to be a man – particularly in a marginalised community where they have limited access to the symbols required of 'ideal' masculinities. Jacqueline Mthembu, who grew up among these men, set out to plug this gap. Mthembu's interest in masculinity studies grew from her own experiences and thoughts regarding 'coloured'* identity. "I grew up in Athlone in Cape Town, where I had a hard time fitting into the classic 'Cape coloured' mould, with my lighter skin and coarser hair.

Her focus on coloured men, in particular, has to do with trying to understand the grounds on which the pervasive stereotypes found in both academic literature and social rhetoric have become synonymous with 'being coloured'. Students' attack on Cecil Rhodes statue leads to soul searching in South Africa. When students hurled a bucket of excrement over a statue of Cecil John Rhodes at South Africa’s highest ranked university, they could scarcely have guessed how their act would trigger national soul searching about heritage, identity and race. 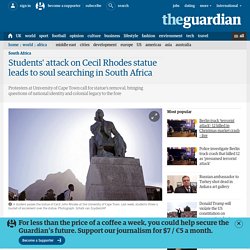 Protesters at the University of Cape Town (UCT) are demanding the statue’s removal as a catalyst for becoming a less “eurocentric” and more African institution. In what one newspaper dubbed “Rhodes rage” and Twitter users embraced as #RhodesMustFall, they argue that the colonialist has no place on campus 21 years after the end of apartheid. The brittle multiracial consensus subsequently built by Nelson Mandela and others is tested every so often by some event that comes seemingly out of the blue. In 2012, it was a satirical painting of president Jacob Zuma with his genitals exposed, leading to a divisive debate about humiliating portrayals of black men versus the artist’s right to criticise.

OPINION: Why Rhodes must fall: Decolonizing space – Wits Vuvuzela. “The #RhodesMustFall movement at the University of Cape Town has spread to other universities in South Africa, sparking debates about institutionalised racism and sexism. 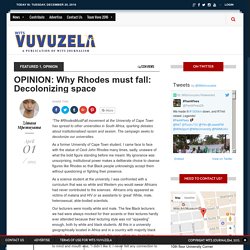 The campaign seeks to decolonize our universities. The politics behind the 0% In this most unequal of countries in the world, where 20 years of democracy have not decisively ended the centuries-long recycling of black poverty and structural racism, a routine increase of tuition fees at universities has proved to be the tipping point. 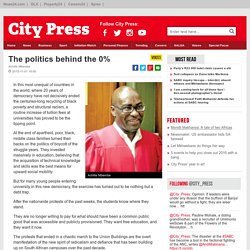 At the end of apartheid, poor, black, middle class families turned their backs on the politics of boycott of the struggle years. They invested massively in education, believing that the acquisition of technical knowledge and skills was the best means for upward social mobility. But for many young people entering university in this new democracy, the exercise has turned out to be nothing but a debt trap. Paul Gilroy in search of a not necessarily safe starting point… Rosemary Bechler (RB): What is the relationship between the safe spaces furore in the States and the Rhodes furore and the South African furore… Are they linked? 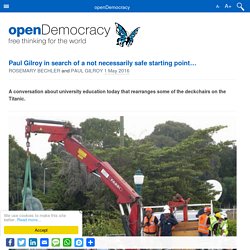 Are they part of one great global identity crisis? Or are they different in nature, with very different implications for social justice? Paul Gilroy (PG): Of course, the African American campus eruptions, particularly at elite institutions; the things that are going on in Oxford with regard to the Rhodes statue and the process in South Africa – are linked. The internet links them. A shared vocabulary links them. However, I would want to try and distinguish them. RB: A bit like reductive readings of the Black Atlantic that talk about water and flows and such like?

Part of me wants to say that this is a new era, and part, that if you try to grasp any identity politics seriously you have to deal with that politics in its own terms, very precisely, in space and time. Obviously language plays a part. I don’t want to be misunderstood. Upcoming Events – The Fire This Time: Decolonizing Higher Education, A Conversation with Suren Pillay and Juan Gonzalez – Urban Democracy Lab.

As South Africa grapples with a legacy of apartheid, twenty years later the question of its colonial past is being taken up more vociferously in the university. 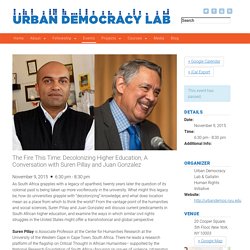 What might this legacy be; how do universities grapple with “decolonizing” knowledge; and what does location mean as a place from which to think the world? From the vantage point of the humanities and social sciences, Suren Pillay and Juan Gonzalez will discuss current predicaments in South African higher education, and examine the ways in which similar civil rights struggles in the United States might offer a transhistorical and global perspective. Suren Pillay is Associate Professor at the Center for Humanities Research at the University of the Western Cape in Cape Town, South Africa.

Student Politics in SA: A Response to Critics. The Centre for Humanities ResearchThe Centre for Humanities Research. Oxford Uni must decolonise its campus and curriculum, say students. Students at Oxford University are campaigning for greater racial sensitivity and representation of non-white culture at the institution. Rhodes Must Fall In Oxford, a campaign set up by students in the city, is calling on the university to “decolonise” the campus and curriculum. The campaign’s co-founder, Ntokozo Qwabe, a student studying law at Keble College, says: “A lot of the time when people talk about colonialism they think of it as a past event that happened.

They don’t think about it as something that manifests itself in everyday life at institutions like Oxford.” The campaign has gained over 2,500 followers on Facebook and students have protested outside Oriel College, where a statue of Cecil Rhodes stands. South Africa’s student movement could be catalyst for wider social change. A major wave of protests has brought to a halt several universities in South Africa – Witwatersrand University, University of Cape Town, Fort Hare, Rhodes and Stellenbosch have all been affected. The issue of student fee increases, and more generally the exorbitant cost of higher education for the average South African, have become the catalyst for these protests. Demands for racial justice and concerns about economic inequality are coming together in a powerful call for change that cannot be ignored or easily dismissed. This movement emerges from sustained efforts in the last months to build a wider social movement to bring about transformation of university staff and students, and widening access to higher education to include most South Africans – especially the black majority who continue to be excluded and discriminated.

A narrow path focusing on representation in current state structures is certainly desirable as a first step towards systemic change. JM Coetzee: Universities head for extinction. Dear John, Can South Africa be "decolonized"? - NEWS & ANALYSIS. RW Johnson says that, while doomed to fail, such an effort would have hugely destructive consequences. Op-Ed: Why is the state not a target of student protests? University of the Witwatersrand (Wits) vice-chancellor Adam Habib, is not usually someone who can be described as short of energy. Yet, the news clips of Habib sitting cross-legged while surrounded by protesting students saw him looking rather defeated by it all. UCT protesters call for 'white human shield' LIVE: Maties protesters stuck in library let out. Protesters occupy Shoprite, demand lower bread price.

The student uprisings in South Africa. Waves of still ongoing protests (it has morphed from #FeesMustFall to #NationalShutdown) have brought to a halt several universities in South Africa – Wits University, University of Cape Town, Fort Hare, Rhodes and Stellenbosch have all been affected and students from other universities are joining the movement every day. Oxford students campaign to remove 'racist' Rhodes from college. An Oxford University college has said it hopes to remove a plaque dedicated to Cecil Rhodes and will also consider taking down a statue of the British imperialist after a campaign by students.

More than 2,300 people have signed a petition calling on Oriel college to remove the dedications. What is the university for? Student Protests Just the Tip of South Africa’s ‘Grievance Iceberg’ Students have been rallying at South Africa’s universities since Oct. 13 to oppose a planned 11.5 percent tuition hike, with public investment in education declining across the country. After the reawakening of South African student activism, where to next? GroundUp Op-Ed: UCT’s economics curriculum – time for an overhaul? The School of Economics is one of UCT’s biggest departments, shaping the understanding and priorities of students who will lead economic decision-making in this country. Yet the economics undergraduate curriculum is largely abstracted from South Africa’s economic crisis and reinforces an anti-poor understanding of policies.

I have a clear memory of sitting in my second year microeconomics class. The lecturer drew attention to government intervention, showing that it was always “inefficient”. No mention of how, for most of this country, state support is a matter of life and death. When I objected, I remember my disappointment (and anger) at his dismissive answer. A year later, I sat in an advanced microeconomics class workshop on our minimum wage essay, which hinted strongly that a “good” argument would be the negative effect on employment.

Critical economic thinking is simply not taught during an economics undergraduate degree. Uncontextualised teaching is deeply immoral. South Africa’s Student Spring? Hashtag generation revives spirit of 1976 in fight for access to education. In the Fall: Decolonisation and the rejuvenation of the academic project in South Africa.