New Method Could Reveal Your Entire Viral Infection History With A Single Drop Of Blood. By analyzing just a single drop of blood, scientists could reveal every virus you’ve ever been infected with. 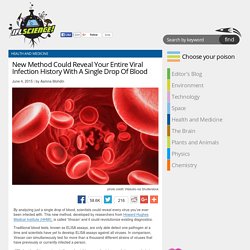 This new method, developed by researchers from Howard Hughes Medical Institute (HHMI), is called ‘Virscan’ and it could revolutionize existing diagnostics. Traditional blood tests, known as ELISA assays, are only able detect one pathogen at a time and scientists have yet to develop ELISA assays against all viruses.

In comparison, Virscan can simultaneously test for more than a thousand different strains of viruses that have previously or currently infected a person. “What makes this so unique is the scale: right now, a physician needs to guess what virus might be at play and individually test for it. With VirScan, we can look for virtually all viruses, even rare ones, with a single test,” says corresponding author Stephen Elledge, in a statement. The study, published in Science, found that over their lifetimes, participants had been exposed to an average of 10 viral species.

Being on time is important to obsessively punctual people. “If you’re late, we’ll be nice to your face but inside we’re seething.” 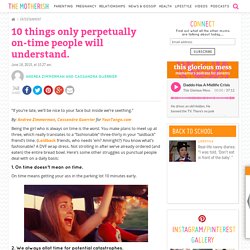 By: Andrea Zimmerman, Cassandra Guerrier for YourTango.com Being the girl who is always on time is the worst. You make plans to meet up at three, which really translates to a “fashionable” three-thirty in your “laidback” friend’s time. (Laidback friends, who needs ’em? Amiright?) 1. On time means getting your ass in the parking lot 10 minutes early. 2. This includes traffic, wrong directions, stopping for petrol, train delays, airport security lines, etc. ScienceAlert. If you've ever felt the obsessive need to check Facebook - usually while you're putting off working or doing something productive - then you'll be interested in the findings of a new study from the University of California, Los Angeles. 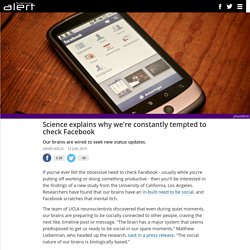 Researchers have found that our brains have an in-built need to be social, and Facebook scratches that mental itch. The team of UCLA neuroscientists discovered that even during quiet moments, our brains are preparing to be socially connected to other people, craving the next like, timeline post or message. "The brain has a major system that seems predisposed to get us ready to be social in our spare moments," Matthew Lieberman, who headed up the research, said in a press release.

Things You Only Know When Your Parents Are Dead. Joel and his mother. 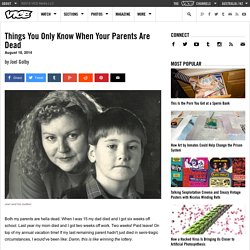 Both my parents are hella dead. When I was 15 my dad died and I got six weeks off school. Last year my mom died and I got two weeks off work. Two weeks! Paid leave! Instead I spent a two weeks shaking hands with funeral directors and going to council buildings and filling out forms. So, here's some stuff I've picked up after a year of being an orphan. LOOKING AT THE CORPSES OF THE PEOPLE WHO MADE YOU IS QUITE WEIRD Funeral directors have a lot of things to deal with—liquids, cavities, flicking through an eight-page pamphlet of somber flower arrangements and pretending any of it matters...

Intense Series Of Art Shows The Truth About Modern Culture. Advertisement These wonderful pieces of work, created by Luis Quiles, have some of the most powerful messages displayed in a truthful and graphic form. 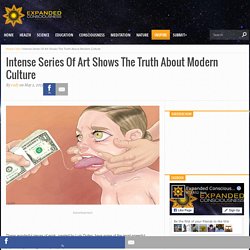 These images mean more than just pen and paper. They shed light on topics people are too naive to admit themselves. Even if it seems a little too “truthful” relating to some of the more “pornographic” images, these masterpieces need to be shown to the general public. Noosquest. WikiLeaks Party Wikileaks Party - WIKILEAKS PARTY FUNDRAISING DRIVE. The WikiLeaks Party is your party. Help us take the fight to Canberra in 2013. This month the WikiLeaks Party launches its fundraising drive, our goal: $700,000.

We are running 6 or 7 candidates in Victoria, New South Wales, Western Australia and possibly also Queensland and Tasmania. Polls are showing support for our party is running high. We can build on these results with a well funded and powerful campaign. With a solid financial base our party can take our core values and put them into action; by communicating on a variety of platforms, by promoting our candidates and by engaging with and connecting with Australians who demand a more accountable government and a fairer and more just society. Wikileaks Party - Home. Alastair Parvin: Architecture for the people by the people.

Monsanto’s Dirty Dozen: The 12 Most Awful Products Made By Monsanto. When you take a moment to reflect on the history of product development at Monsanto, what do you find? 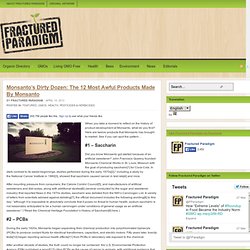 Here are twelve products that Monsanto has brought to market. See if you can spot the pattern… #1 – Saccharin Did you know Monsanto got started because of an artificial sweetener? John Francisco Queeny founded Monsanto Chemical Works in St. After mounting pressure from consumers, the Calorie Control Council[5], and manufacturers of artificial sweeteners and diet sodas, along with additional studies[6] (several conducted by the sugar and sweetener industry) that reported flaws in the 1970s studies, saccharin was delisted from the NIH’s Carcinogen List.