This former journalist helps caregivers get to know who their patients once were, before dementia took hold. Jay Newton-Small, a District resident, started a business writing anecdote-filled profiles of dementia patients after her father got Alzheimer’s. 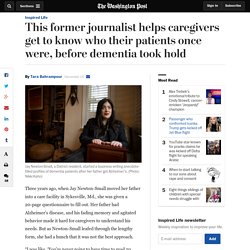 (Photo: Nikki Kahn) Three years ago, when Jay Newton-Small moved her father into a care facility in Sykesville, Md., she was given a 20-page questionnaire to fill out. Her father had Alzheimer’s disease, and his fading memory and agitated behavior made it hard for caregivers to understand his needs. But as Newton-Small leafed through the lengthy form, she had a hunch that it was not the best approach. “I was like, ‘You’re never going to have time to read 20 pages on each patient,” said Newton-Small, a District resident who was a reporter for Time magazine. [Older Americans are happiest in Hawaii, least happy in West Virginia, according to new Gallup ranking] “They loved it,” she recalled. [What if doctors could prescribe something to treat social isolation? 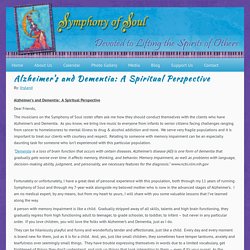 As you know, we bring live music to everyone from infants to senior citizens facing challenges ranging from cancer to homelessness to mental illness to drug & alcohol addiction and more. We serve very fragile populations and it is important to treat our clients with courtesy and respect. Relating to someone with memory impairment can be an especially daunting task for someone who isn’t experienced with this particular population.

INTIMATIONS OF THE GREAT UNLEARNING: INTERRELIGIOUS SPIRITUALITY AND THE DEMISE OF CONSCIOUSNESS WHICH IS ALZHEIMER'S, the Fall 2001 issue of CrossCurrents. By Gisela Webb GISELA WEBB is Associate Professor in the Religious Studies Department, and director of the Honors Program, at Seton Hall University, South Orange, New Jersey. 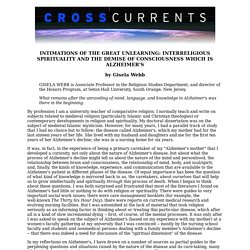 What remains after the unraveling of mind, language, and knowledge in Alzheimer's was there in the beginning. The Mysteries of My Father's Mind. Finding the Why; Enabling Active Participation in Life in Aged Care. Bringing Dementia Patients to Life - Richard Gunderman. We know a lot about Alzheimer's disease. For example, we know that it is the sixth-leading cause of death in the United States. We know that one in three seniors dies with some form of dementia. And we know that over 5 million Americans are currently living with Alzheimer's. But there are some important things we don't know—and I am not referring simply to the still-elusive cure for the disease. I am also talking about new insights familiar to experts in dementia care, which have not yet reached many of the 15 million Americans caring for a loved one with the disease.

I recently spoke with Theresa Klein, an occupational therapist at Augustana Emerald Crest Assisted Living in Minneapolis, who has been caring for people with dementia for 23 years. To provide the best possible care for dementia patients, we need to get past some important misconceptions about the disease. Theresa and her colleagues now invite patients to participate in such rituals on a regular basis. Gladys Wilson and Naomi Feil. Poetry Project Helps Dementia Patients Live in the Moment. Making Sense of Alzheimer's.

A Theology Out of my Life with Alzheimer Disease. February 24, 2013 The following is a teaching I presented at our Eighth Day Faith Community. 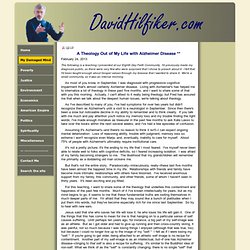 I'd previously made my diagnosis public, so there were very few who were surprised that I chose to preach about it. Watching the Lights Go Out. Community and Isolation - inward/outward. Editor’s Note: David Hilfiker is giving a gift to the community by going public about his early stage Alzheimer’s. 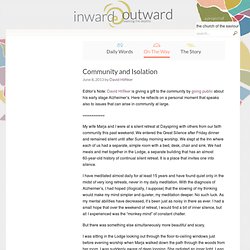 Here he reflects on a personal moment that speaks also to issues that can arise in community at large. My wife Marja and I were at a silent retreat at Dayspring with others from our faith community this past weekend. We entered the Great Silence after Friday dinner and remained silent until after Sunday morning worship.

We slept at the Inn where each of us had a separate, simple room with a bed, desk, chair and sink. We had meals and met together in the Lodge, a separate building that has an almost 60-year-old history of continual silent retreat. I have meditated almost daily for at least 15 years and have found quiet only in the midst of very long retreats, never in my daily meditation. But there was something else simultaneously more beautiful and scary. And then the future broke in. Americans Rank Alzheimer's As Most Feared Disease. 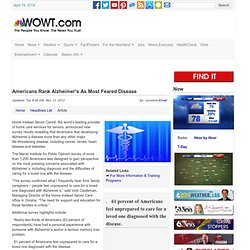 Sounds of Forgetting by Aynsley. CLHSpiritandaging's channel. I REMEMBER BETTER WHEN I PAINT. Alzheimer’s Poetry Project : Home. To Whom I May Concern. Framework-Draft.pdf (application/pdf Object) They Don't Remember. Marguerite Manteau-Rao: 13 Essential Tips for Dementia Caregivers. The journey of dementia is never easy, and it can be made many times worse if family members do not have the internal tools to take care of themselves and their loved ones. 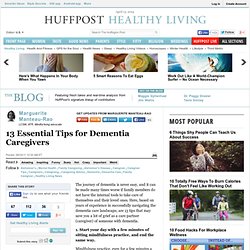 Here, based on years of experience in successfully navigating the dementia care landscape, are 13 tips that may save you a lot of grief as a care partner (caregiver) of someone with dementia. 1. Start your day with a few minutes of sitting mindfulness practice, and end the same way. Mindfulness practice, even for a few minutes a day, can reduce stress. It is also a good way to start your day from a calm, centered place, which is what your loved one needs most from you. 2. The same way you were observing your breath while sitting, you can also pay attention to the sensations of your feet on the ground while walking. 3. When caring for someone with dementia, you are bound to experience many -- and sometimes difficult -- emotions: grief, anger, boredom, tiredness, fear, anxiety, frustration. 4. Connections_Spring10. Alzheimer’s and spiritual care. Five million Americans have Alzheimer’s disease according to a 2013 report by the Alzheimer’s Association, the leading advocacy and public education organization about this degenerative brain condition. 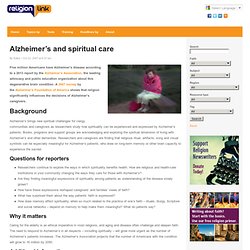 A 2007 survey by the Alzheimer’s Foundation of America shows that religion significantly influences the decisions of Alzheimer’s caregivers. Background. VoicingTheSpiritual.pdf (application/pdf Object) Spiritual Resources. Assembly of Episcopal Healthcare Chaplains (AEHC) is a professional association for chaplains and supporters within the Episcopal Church. 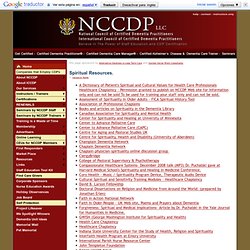 Catholic Health Association of the United States (CHA) is dedicated to serving the nation's Catholic health care organizations and supporting the strategic directions of mission, ethics and advocacy. A large group of nonprofit health care sponsors, systems and facilities, CHA welcomes and respects people of all beliefs and traditions, attending to their body, mind and spirit. COMISS Commission on Accreditation of Pastoral Services (CCAPS), sponsored by the COMISS Network offers consultation and accreditation for chaplaincy departments in specialized ministry settings. COMISS Network is an organization whose vision is to be a unified voice for the preparation and practice of spiritual care through chaplaincy and pastoral counseling. www.comissnetwork.org HealthCare Chaplaincy.

National Voluntary Organizations Active in Disaster. Wayne E. INTIMATIONS OF THE GREAT UNLEARNING: INTERRELIGIOUS SPIRITUALITY AND THE DEMISE OF CONSCIOUSNESS WHICH IS ALZHEIMER'S, the Fall 2001 issue of CrossCurrents. Alzheimers and spiritual growth. A reader asked (in Dutch): As a social worker in a nursing home I had a conversation last week with the wife of a gentleman living on our psych-ward. 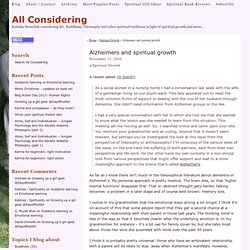 This lady appeared not to need the most common forms of support in dealing with the loss of her husband through dementia. She didn’t need information from Alzheimer groups or the like.I had a very special conversation with her in which she told me that she wanted to know what the lesson was she needed to learn from this situation. This meeting set me moving as well. So, I searched online and came upon your site. Alzheimers - A Spiritual Interpretation - Alzheimers. Guest Author - Debbie Mandel I was trying to make sense of Alzheimer’s, especially since I do mind/body work. I happened to be presenting a basic stress-reduction workshop at New York University’s Rusk Institute when the head clinician, the elder statesman of the group confided that Rusk believes that Alzheimer’s is a disease that compels a person to release the past. I was shocked to say the least to hear this interpretation of a neurological illness by a PhD.