Ignorance About Education  Ignorance has many powerful advantages over knowledge. 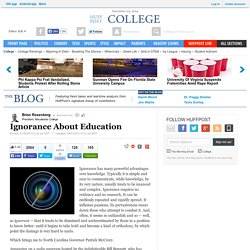 Typically it is simple and easy to communicate, while knowledge, by its very nature, usually tends to be nuanced and complex. Ignorance requires no evidence and no research. It can be endlessly repeated and rapidly spread. It inflames passions. Its pervasiveness wears down those who attempt to combat it. Which brings me to North Carolina Governor Patrick McCrory. Appearing on a radio program hosted by the indefatigable Bill Bennett, who has mastered the art of replacing evidence with polemic, Governor McCrory said the following: I'm looking at legislation right now -- in fact, I just instructed my staff yesterday to go ahead and develop legislation -- which would change the basic formula in how education money is given out to our universities and our community colleges. Then he dove thoughtfully into specifics: "If you want to take gender studies that's fine, go to a private school and take it.

No system is perfect. To Save the Humanities, Change the Narrative - Commentary. By Christopher Panza and Richard Schur In the classic children’s story Chicken Little, the main character feels an acorn drop on her head and infers from this that the sky is falling. 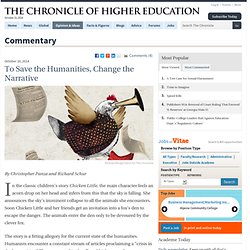 She announces the sky’s imminent collapse to all the animals she encounters. Soon Chicken Little and her friends get an invitation into a fox’s den to escape the danger. The animals enter the den only to be devoured by the clever fox. The story is a fitting allegory for the current state of the humanities. Interestingly, although programs and tenure-track lines may in fact be under stress, actual data do not support the overall crisis narrative.

Here at Drury, we saw those effects become reality a few years ago. Move over, Stem: why the world needs humanities graduates. On the third day God created Stem subjects? 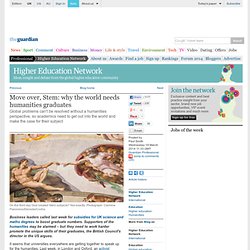 Not exactly. Photograph: Carmine Flamminio/Demotix/Corbis Business leaders called last week for subsidies for UK science and maths degrees to boost graduate numbers. Supporters of the humanities may be alarmed – but they need to work harder promote the unique skills of their graduates, the British Council's director in the US argues.

It seems that universities everywhere are getting together to speak up for the humanities. Why STEM Should Care About the Humanities – The Conversation. One need not look far these days to find people skeptical (at best) about the value of higher education. 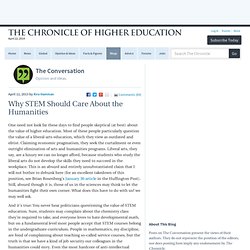 Most of these people particularly question the value of a liberal-arts education, which they view as outdated and elitist. Claiming economic pragmatism, they seek the curtailment or even outright elimination of arts and humanities programs. Report: Humanities, social science education needed along with STEM. At MIT, the humanities are just as important as STEM. The role of the humanities in American education has been the subject of much recent debate amid concerns that the STEM disciplines (science, technology, engineering and math) are eclipsing the humanities fields in relevance and career prospects. 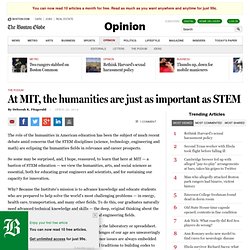 So some may be surprised, and, I hope, reassured, to learn that here at MIT — a bastion of STEM education — we view the humanities, arts, and social sciences as essential, both for educating great engineers and scientists, and for sustaining our capacity for innovation. Continue reading below Why? Because the Institute’s mission is to advance knowledge and educate students who are prepared to help solve the world’s most challenging problems — in energy, health care, transportation, and many other fields. 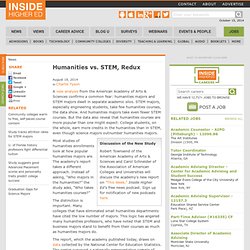 STEM majors, especially engineering students, take few humanities courses, the data show. And humanities majors take even fewer STEM courses. But the data also reveal that humanities courses are more popular than one might expect. College students, on the whole, earn more credits in the humanities than in STEM, even though science majors outnumber humanities majors. Discussion of the New Study Robert Townsend of the American Academy of Arts & Sciences and Carol Schneider of the Association of American Colleges and Universities will discuss the academy's new report on "This Week," Inside Higher Ed's free news podcast. Most studies of humanities enrollments look at how popular humanities majors are.

The distinction is important. Median number of college credits earned by 2008 graduates in humanities and STEM, by student major. 21st Century da Vincis: How Humanities and STEM Intersect. Oh, The Humanities! Why STEM shouldn't take Precedence over the Arts. As much trouble as the education industry is in, every state continues to witness the dissolving of the very funds intended to help it. 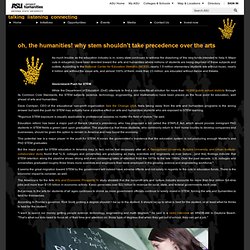 Major cuts in education have been directed toward the arts and humanities where millions of students are being deprived of these subjects and outlets. According to the National Center for Education Statistics (NCES), nearly 1.5 million elementary students are without music, nearly 4 million are without the visual arts, and almost 100% of them, more than 23 million, are educated without dance and theatre. Government Push for STEM.