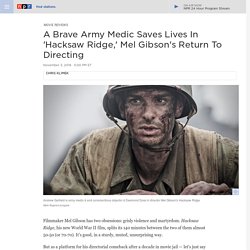 Mel Gibson Pours Fever And Passion Into Every Frame Of 'Hacksaw Ridge' This is FRESH AIR. 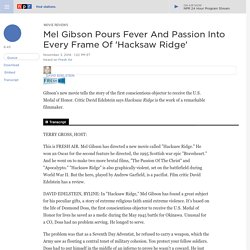 Mel Gibson has directed a new movie called "Hacksaw Ridge. " He won an Oscar for the second feature he directed, the 1995 Scottish war epic "Braveheart. " And he went on to make two more brutal films, "The Passion Of The Christ" and "Apocalypto. " "Hacksaw Ridge" is also graphically violent, set on the battlefield during World War II. But the hero, played by Andrew Garfield, is a pacifist. In 'Hacksaw Ridge,' A War Hero Changes Attitudes About Conscientious Objectors. Mel Gibson's last directing project was the human sacrifice film "Apocalypto" in 2006. 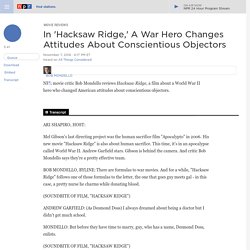 His new movie "Hacksaw Ridge" is also about human sacrifice. This time, it's in an apocalypse called World War II. Andrew Garfield stars. Gibson is behind the camera. And critic Bob Mondello says they're a pretty effective team. BOB MONDELLO, BYLINE: There are formulas to war movies. ANDREW GARFIELD: (As Desmond Doss) I always dreamed about being a doctor but I didn't get much school. MONDELLO: But before they have time to marry, guy, who has a name, Desmond Doss, enlists. GARFIELD: (As Desmond Doss) It isn't right that other men should fight and die but I would just be sitting at home safe. MONDELLO: Played by Andrew Garfield, Doss slogs through basic training, runs obstacle courses, gets all kinds of muddy and then his drill sergeant hands him a rifle.

VINCE VAUGHN: (As Sergeant Howell) This is a personal gift from the United States government designed to bring death to the enemy. Copyright © 2016 NPR. The Real 'Hacksaw Ridge' Soldier Saved 75 Souls Without Ever Carrying A Gun. Desmond Doss joined the Army as a combat medic because he believed in the cause of World War II. 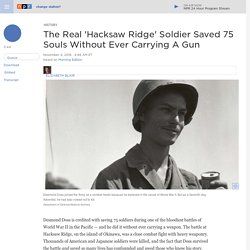 But as a Seventh-day Adventist, he had also vowed not to kill. Department of Defense/National Archives hide caption toggle caption Department of Defense/National Archives. What happened to those who refused to fight? The first six months of the Act saw more than 750,000 cases being heard by tribunals, of which a small number were recognised as ‘‘legitimate’’. 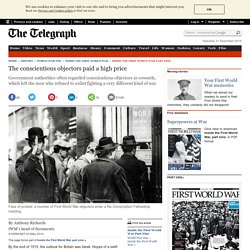 From March 1916 until the end of the war, only 16,000 men were registered as conscientious objectors and allocated alternative service ‘‘of national importance’’. Such work was primarily unarmed service in the Non-Combatant Corps or Royal Army Medical Corps, or civilian labour such as farm or factory work. Tribunals were harsh towards the men society regarded as shirkers. Hearsay and personal opinion were admissible as evidence against them: one outspoken tribunal councillor was heard to declare that “a man who would not help to defend his country and womankind is a coward and a cad”. Members of tribunals were overwhelmingly middle-class and working in the interests of local government, so were wholeheartedly behind the national cause of finding able-bodied men to fight. Conscientious Objectors In Their Own Words.

Before the First World War there had never been compulsory military service in Britain. 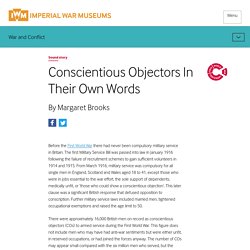 The first Military Service Bill was passed into law in January 1916 following the failure of recruitment schemes to gain sufficient volunteers in 1914 and 1915. From March 1916, military service was compulsory for all single men in England, Scotland and Wales aged 18 to 41, except those who were in jobs essential to the war effort, the sole support of dependents, medically unfit, or ‘those who could show a conscientious objection’. This later clause was a significant British response that defused opposition to conscription. Further military service laws included married men, tightened occupational exemptions and raised the age limit to 50.

There were approximately 16,000 British men on record as conscientious objectors (COs) to armed service during the First World War. Download the transcript of the interviews. HACKSAW RIDGE Interview feat: Mel Gibson & Andrew Garfield. Hacksaw ridge sneak peek. Go Behind the Scenes of Hacksaw Ridge (2016) Andrew Garfield on the True Story Behind Hacksaw Ridge. Mel Gibson Interview on GMA. “Not all First World War soldiers were heroes,” says historian Adrian Gilbert. N a new book, Challenge of Battle: The Real Story of the British Army in 1914, Gilbert reexamines the opening campaigns in France and Belgium, and, amongst other things, notes instances where British troops broke and ran from the field of battle. 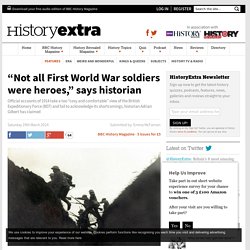 He considers failures at the battle of Le Cateau – normally described as a valiant British delaying action – and the St Quentin Surrender. Inspired by the unusually frank memoirs of Major-General Thomas Snow, the 4th Division’s commander, the book draws on numerous first-hand accounts. Here, in an interview with History Extra, Gilbert discusses his research. Q: What do you mean when you say that ‘not all soldiers were heroes’? A: There’s been a recent and irritating tendency to see soldiers as synonymous with ‘heroes’. In my book I take a fairly hard look at the army, and examine both strengths and weaknesses. World War One: Boy soldier a prisoner at 15 and a hero. A century since the outbreak of World War One, the sacrifice made by those who fought for their country will be remembered in services across the country. 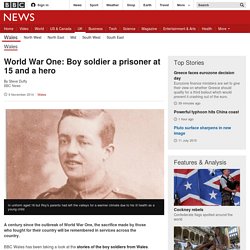 BBC Wales has been taking a look at the stories of the boy soldiers from Wales. At three years old, doctors in the Rhymney Valley feared Roy Makepeace was too weak to live very long. But by the age of 15 he had joined the Army to fight the Germans in World War One. The Barry-born teenager was one of the estimated hundreds of boys from Wales who enlisted under age. Private Royal Victor Nash Makepeace's war - and indeed his life - was a colourful one: He pleaded with his parents to be allowed to join up in October 1914 and his father George, a railwayman, drove him to enlist in his Model T Ford.He was ambushed and held prisoner by the Germans in December 1914 while fighting in Africa - where his family had emigrated. He wrote how 1,500 men holding up 13,000 Germans was "beyond comprehension. " BBC iWonder - How did Harry Patch become an unlikely WW1 hero?