Theconversation. Following in the illustrious footsteps of the likes of Bela Lugosi, Lon Chaney Jr, Peter Cushing and Gene Wilder, James McAvoy plays the mad scientist Victor Frankenstein in the latest film version of Mary Shelley’s gothic novel, this time with Daniel Radcliffe in tow as his assistant Igor. 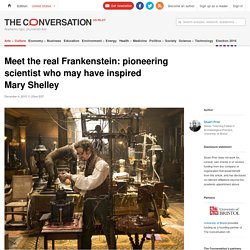 The film promises all the lightning, grave-robbing, and fantastical elements we’ve come to expect from the story. But it also has echoes of a real scientist, working mysteriously in the heart of the English countryside. Culture - Why are film-makers so fascinated by Frankenstein? “Look! 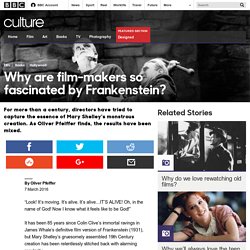 It’s moving. It’s alive. It’s alive…IT’S ALIVE! Oh, in the name of God! Now I know what it feels like to be God!” It has been 85 years since Colin Clive’s immortal ravings in James Whale’s definitive film version of Frankenstein (1931), but Mary Shelley’s gruesomely assembled 19th Century creation has been relentlessly stitched back with alarming regularity.

BBC Bitesize - GCSE English Literature - 'Frankenstein' - Chapter 5 - the creation of the monster. "There is no escape." Horace Walpole and the terrifying rise of the Gothic. This year is the 250th anniversary of Horace Walpole’s The Castle of Otranto, first published on Christmas Eve 1764 as a seasonal ghost story. 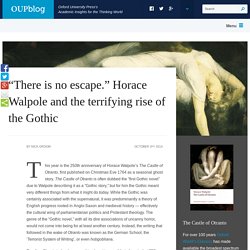 The Castle of Otranto is often dubbed the “first Gothic novel” due to Walpole describing it as a “Gothic story,” but for him the Gothic meant very different things from what it might do today. While the Gothic was certainly associated with the supernatural, it was predominantly a theory of English progress rooted in Anglo-Saxon and medieval history — effectively the cultural wing of parliamentarian politics and Protestant theology. The genre of the “Gothic novel,” with all its dire associations of uncanny horror, would not come into being for at least another century. iWonder - Spine-chillers and suspense: A timeline of Gothic fiction. The Gothic. Here we are in Horace Walpole's house, Strawberry Hill. 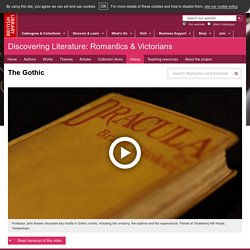 This is the place where both the Gothic revival in architecture and Gothic fiction began. The whole thing is a fake or theatrical version in miniature of what a Gothic or medieval castle might be. But it's not just architecturally that this house is important, because it's also very important in literary terms. One night when he's asleep in his bedroom upstairs and dreams of a gigantic armoured fist appearing on the staircase behind me – and that inspires him to write The Castle of Otranto. This is published in 1764 and begins this enormously powerful tradition that continues to the present day in hundreds of books, television programmes and films. Gothic fiction is fascinated by strange places. So, at the heart of Gothic fiction is the question of power. Gothic novels are full of perverse, weird and dangerous kinds of sexuality. One really useful term for thinking about Gothic writing, is the uncanny. Three Frankenstein Poems by Edward Field. Three Frankenstein Poems Frankenstein The monster has escaped from the dungeon where he was kept by the Baron, who made him with knobs sticking out from each side of his neck where the head was attached to the body and stitching all over where parts of cadavers were sewed together. 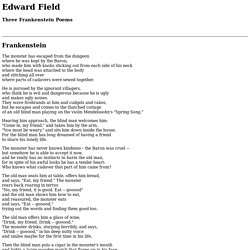 He is pursued by the ignorant villagers, who think he is evil and dangerous because he is ugly and makes ugly noises. They wave firebrands at him and cudgels and rakes, but he escapes and comes to the thatched cottage of an old blind man playing on the violin Mendelssohn's "Spring Song. " Hearing him approach, the blind man welcomes him: "Come in, my friend," and takes him by the arm. The monster has never known kindness ‹ the Baron was cruel -- but somehow he is able to accept it now, and he really has no instincts to harm the old man, for in spite of his awful looks he has a tender heart: Who knows what cadaver that part of him came from? The old man offers him a glass of wine, "Drink, my friend. Gothic Timeline. English 8- Mrs. Aho - Tell Tale Heart. "The Tell Tale Heart" by Edgar Allen PoeUNIT PLAN: About the Author:TellTale Heart Prediction Questions: Story Activities: Go to page 10 of the document below to print out the template for the vocab assignment, or just make your own word webs: Vocabulary: Foresight: Thoughtful regard for the future Dissimulation: Hidden under a false appearance Vexed: Troubled, distressed, caused agitation Sagacity: Sound judgment Hearkening: Giving careful attention Awe: A mixed feeling of reverence, fear, and wonder Distinctness: Unmistakable, clearly defined Over-acuteness: Very keen Concealment: A means of hiding Waned: To grow gradually less Scantlings: Small quantities or amounts Suavity: Gracefulness, politeness Bade: Urged, compelled Audacity: Bold courage, daring Reposed: To lay at rest Derision: Contempt, ridiculeStory Link: version of the story: Tale Heart Active Reading Guide: 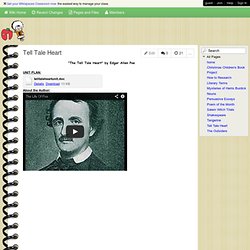