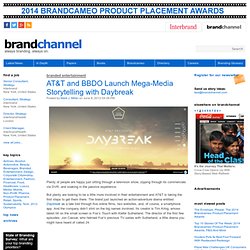 Miller on June 8, 2012 04:38 PM Plenty of people are happy just sitting through a television show, zipping through its commercials via DVR, and soaking in the passive experience. Secret Location Combines Gaming, Interactivity, and Telephony With Mysterious Film "The Sevens" When visiting the website of a creative company, the expectation is to find some contact information and selections of work and/or a demonstration of just how desperately social-media-savvy the proprietors are. 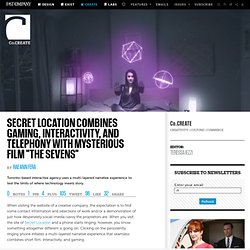 When you visit the site of Secret Location and a phone starts ringing, however, you know something altogether different is going on. Clicking on the persistently ringing phone initiates a multi-layered narrative experience that seamless combines short film, interactivity, and gaming. Dubbed The Sevens, the experience is the centerpiece of Toronto-based interactive agency Secret Location’s relaunched website and is designed to surprise and entertain while showcasing the extent of the company’s skills. The Sevens begins and ends with a phone call and contains three puzzles for viewers to solve. In Filmmaking Now, Directors Become Programmers And Programmers Become Gods. Gameful Landing Page. Playing With the Monster: How to Build a Successful Trans-media Project. Rating: 5.0/5 (1 vote cast) Art of Crime developed a total cross-media strategy from scratch AND designed the whole platform for a trans-media expansion BEFORE launch.

Their test launch last year showed a unique potential, and the Scandinavian MMO launch this summer has proven it is scalable now with over 80 thousand Crimevillains and hundreds joining every day. But hey! It all sounds easy on paper. How do you really create monetizable production and distribution pipelines, artwork and 40 characters that fit all platforms? Delivered at Casual Connect Europe, February 2012. The Miracle Mile Paradox ARG by Transmedia LA. Rexford Higgs, in the video above, is just one of many characters with which you will be able to interact as if they were real people in The Miracle Mile Paradox, an alternate reality game (ARG) set in a historic neighborhood of Los Angeles. 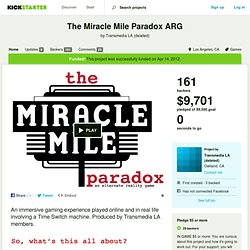 The game will run for 14 weeks this summer and will be playable both online and in real life for free! It's simple! All the "in game" characters like Rex will have websites, Facebook pages, Twitter accounts, even phone numbers, which you can read, follow and call as you discover pieces of the story. We Dream of Nothing. The Karada. Punchdrunk. SOUND OF MY VOICE. The Wilderness Downtown. Take This Lollipop. Art is Open Source, augmented reality, knowledge, hacking, art.

Online screening: Journey To The End Of Coal. A project powered by Klynt Editing & publishing app. 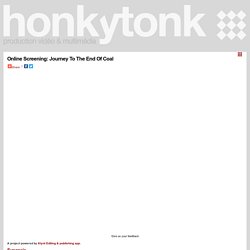 Journey To The End Of Coal tells you the story of a sacrifice. A sacrifice millions of Chinese coal miners are making everyday, risking their lives and spoiling their land to satisfy their own country’s appetite for economic growth. Your journey begins in Datong which is located just a couple hours away West from Beijing. You travel from there all around the region and visit its major coal mines, from the “best” state-owned complex to the worst private coal plants. In and around the coal mines, you get the story first hand from the mingong, the rural migrants traveling their country looking for work. Transmedia Lab. Your Best Photo Stories - Photojournalism and Social Documentary – Pictory. 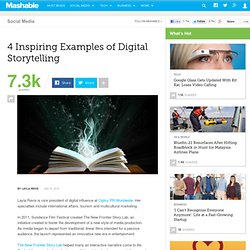 Her specialties include international affairs, tourism and multicultural marketing. In 2011, Sundance Film Festival created The New Frontier Story Lab, an initiative created to foster the development of a new style of media production. As media began to depart from traditional, linear films intended for a passive audience, the launch represented an innovative new era in entertainment. The New Frontier Story Lab helped many an interactive narrative come to life. Each of these productions features multiple points of entry across platforms and employs technologies such as facial recognition, augmented reality, geo-location, motion sensors, data visualization and the entire toolset of social and mobile platforms. President of the National Film Board of Canada, Tom Perlmutter's multi-platform interactive productions have also been revolutionizing transmedia.

A scene from the computer-powered film whiteonwhite:algorithmicnoir. 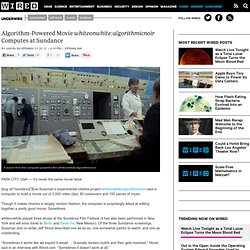 PARK CITY, Utah — It’s never the same movie twice. [bug id="sundance"]Eve Sussman’s experimental cinema project whiteonwhite:algorithmicnoir uses a computer to build a movie out of 3,000 video clips, 80 voiceovers and 150 pieces of music. Though it makes choices in largely random fashion, the computer is surprisingly adept at editing together a pretty good movie. Sometimes. whiteonwhite played three shows at the Sundance Film Festival (it has also been performed in New York and will soon travel to Berlin and Santa Fe, New Mexico). “Sometimes it works like we expect it would….