Hunger. Who are the hungry? Most of the world’s hungry live in developing countries. 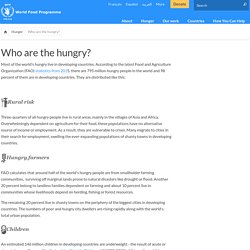 According to the latest Food and Agriculture Organization (FAO) statistics from 2015, there are 795 million hungry people in the world and 98 percent of them are in developing countries. They are distributed like this: Rural risk Three-quarters of all hungry people live in rural areas, mainly in the villages of Asia and Africa. Overwhelmingly dependent on agriculture for their food, these populations have no alternative source of income or employment. Hungry farmers FAO calculates that around half of the world's hungry people are from smallholder farming communities, surviving off marginal lands prone to natural disasters like drought or flood. What causes hunger? The world produces enough to feed the entire global population of 7 billion people. 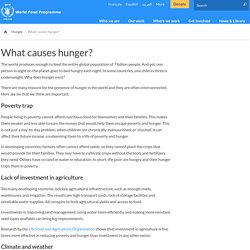 And yet, one person in eight on the planet goes to bed hungry each night. In some countries, one child in three is underweight. Hunger and Malnutrition. Listen We've all seen news reports about people who are starving in countries plagued by war or drought. 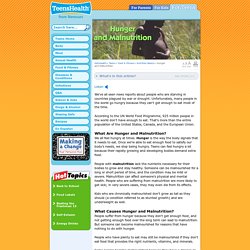 Unfortunately, many people in the world go hungry because they can't get enough to eat most of the time. According to the UN World Food Programme, 925 million people in the world don't have enough to eat. That's more than the entire population of the United States, Canada, and the European Union. What Are Hunger and Malnutrition? We all feel hungry at times. People with malnutrition lack the nutrients necessary for their bodies to grow and stay healthy. Kids who are chronically malnourished don't grow as tall as they should (a condition referred to as stunted growth) and are underweight as well. 3. Food shortage. Contents - Previous - Next This is the old United Nations University website. 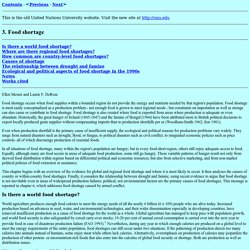 Visit the new site at 3. Food shortage Is there a world food shortage? Ellen Messer and Laurie F. Food shortage occurs when food supplies within a bounded region do not provide the energy and nutrients needed by that region's population. Even when production shortfall is the primary cause of insufficient supply, the ecological and political reasons for production problems vary widely. World Environment Day - Food Waste Facts. The impact of food waste is not just financial. 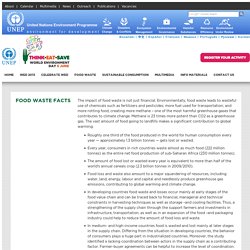 Environmentally, food waste leads to wasteful use of chemicals such as fertilizers and pesticides; more fuel used for transportation; and more rotting food, creating more methane – one of the most harmful greenhouse gases that contributes to climate change. Methane is 23 times more potent than CO2 as a greenhouse gas. The vast amount of food going to landfills makes a significant contribution to global warming. Roughly one third of the food produced in the world for human consumption every year — approximately 1.3 billion tonnes — gets lost or wasted. Every year, consumers in rich countries waste almost as much food (222 million tonnes) as the entire net food production of sub-Saharan Africa (230 million tonnes). Sources: Global Food Losses and Food Waste - FAO, 2011 The environmental crisis: The environment’s role in averting future food crisis – UNEP, 2009. Freedom from Hunger. World Hunger Facts: Causes, Effects and Solutions This year, nearly 9 million children younger than five years old will die needlessly, more than half from hunger-related causes.1Few of these deaths are related to outright starvation, but rather to common illnesses (such as diarrhea, malaria and measles) that move in on vulnerable children whose bodies have been weakened by hunger.2Freedom from Hunger concentrates its services in the world's poorest nations, where an overwhelming 32% are moderately to severely stunted—seriously below normal height for one's age.2In the developing world, more than 1.4 billion people currently live below the international poverty line, earning less than $1.25 per day.3Among this group of poor people, many have problems obtaining adequate, nutritious food for themselves and their families. 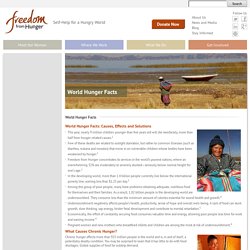 As a result, 1.02 billion people in the developing world are undernourished. The world food crisis: what's behind it and what we can do about it by Eric Holt-Gimenez. The world food crisis: what is behind it and what we can do Eric Holt-Giménez (October 23, 2008) The World Food Program's description of the global food crisis raises the specter of a natural disaster surging over an unaware populace that is helpless in the face of massive destruction. 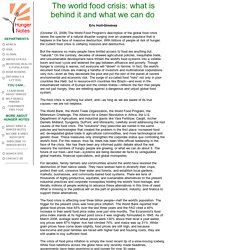 Know Your World: Facts About World Hunger & Poverty. World Population +7 billion World Hunger 795 million people – or one in nine people in the world – do not have enough to eat.98% of the world’s undernourished people live in developing countries.Where is hunger the worst? 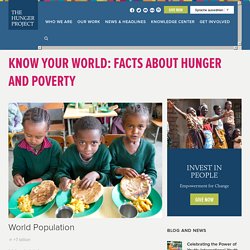 Asia: 525.6 millionSub-Saharan Africa: 214 millionLatin America and the Caribbean: 37 millionAiming at the very heart of hunger, The Hunger Project is currently committed to work in Bangladesh, Benin, Burkina Faso, Ethiopia, India, Ghana, Malawi, Mexico, Mozambique, Peru, Senegal and Uganda. Women and Children 60 percent of the world’s hungry are women.50 percent of pregnant women in developing countries lack proper maternal care, resulting in 240,000 maternal deaths annually from childbirth.1 out of 6 infants are born with a low birth weight in developing countries.Poor nutrition causes nearly half (45%) of deaths in children under five – 3.1 million children each year.

Hunger Statistics. Every year, authors, journalists, teachers, researchers, schoolchildren and students ask us for statistics about hunger and malnutrition. 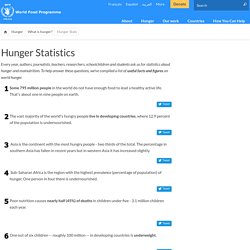 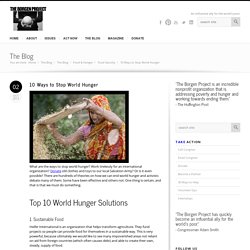 Work tirelessly for an international organization? Donate old clothes and toys to our local Salvation Army? Or is it even possible? How Do We Fight Global Hunger? - Catholic Relief Services Helping Hands. Photo by: Courtesy of Elizabeth Whelan Today, Stop Hunger Now brings food to those who are hungry. Tomorrow, CRS brings the opportunity to end hunger. Distributing food is not the solution to hunger; it is the easing of suffering. The Helping Hands program aims to permanently end hunger and ease suffering not only by providing food, but by teaching and training the people of Burkina Faso in West Africa to provide food for themselves for the long term. The Stop Hunger Now meal packaging event provides the food that eases suffering and saves lives, and CRS brings life changing, innovative development programs to address the causes of hunger.

Through your participation in Helping Hands, you are ensuring that the Burkinabé will learn innovative farming methods and skills so they can earn better incomes. Brainstorm and mind map online.