Using a Breadboard - Physical Computing with Raspberry Pi. Difficulty: introduction A breadboard is a very useful device for prototyping circuits. 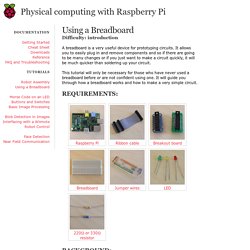 It allows you to easily plug in and remove components and so if there are going to be many changes or if you just want to make a circuit quickly, it will be much quicker than soldering up your circuit. This tutorial will only be necessary for those who have never used a breadboard before or are not confident using one. It will guide you through how a breadboard works and how to make a very simple circuit.

See the breadboard page for information on the internals of a breadboard. First we’ll plug in the breakout board. Breakout board clipped in place. Next we’ll connect the 3.3V (3V3 pin) to the power rail and ground (GND pin) to the ground rail. Power rails connected. Now let’s wire up an LED to one of the GPIO pins. The columns are connected together so we cannot just put everything in one column. The LED’s two leads are connected to the same column so it will not light up. Finger Print Scanner (GT-511C3) Library.

I got a GT-511C3 finger print scanner Sparkfun as part of a project for controlling my front door lock. 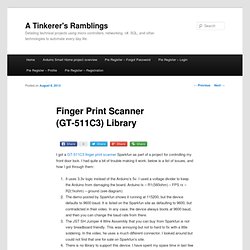 I had quite a bit of trouble making it work. below is a list of issues, and how I got through them: It uses 3.3v logic instead of the Arduino’s 5v. I used a voltage divider to keep the Arduino from damaging the board. Arduino tx – R1(560ohm) – FPS rx – R2(1kohm) – ground (see diagram)The demo posted by Sparkfun shows it running at 115200, but the device defaults to 9600 baud.

It is listed on the Sparkfun site as defaulting to 9600, but contradicted in their video. Using Raspberry Pi as a Photo Station. Productivity Sauce Sep 24, 2012 GMT Dmitri Popov Although Raspberry Pi (RPi) is not powerful enough for heavy-duty image processing, you can still put it to some photography-related uses. 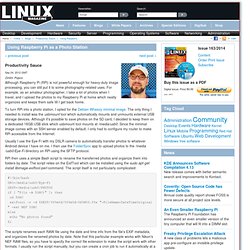 For example, as an amateur photographer, I take a lot of photos when I travel, and I upload the photos to my Raspberry Pi at home which neatly organizes and keeps them safe till I get back home. To turn RPi into a photo station, I opted for the Debian Wheezy minimal image. Usually I use the Eye-Fi with my DSLR camera to automatically transfer photos to whatever Android device I have on me. RPi then uses a simple Bash script to rename the transferred photos and organize them into folders by date. . #! The scripts renames each RAW file using the date and time info from the file's EXIF metadata, and organizes the renamed photos by date.

This is not the most advanced solution, but it serves me well when I'm out and about. Comments. Logging data to a web server. Hello martyndwheeler! 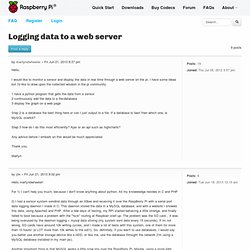 For 1) I can't help you much, because I don't know anything about python. Raspberry Pi Temperature Logger. In this article I'm going to describe how I used a Raspberry Pi to build an SQLite based temperature logging system with a web UI. 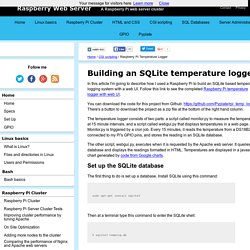 Follow this link to see the completed Raspberry Pi temperature logger with web UI. You can download the code for this project from Github: There's a button to download the project as a zip file at the bottom of the right hand column. The temperature logger consists of two parts: a script called monitor.py to measure the temperature at 15 minute intervals, and a script called webgui.py that displays temperatures in a web page. Monitor.py is triggered by a cron job. Every 15 minutes, it reads the temperature from a DS18B20 connected to my Pi's GPIO pins, and stores the reading in an SQLite database. The other script, webgui.py, executes when it is requested by the Apache web server. Set up the SQLite database. MySQL – Raspberry Pi Projects.

Installing MySQL If you want MySQL also do the following: 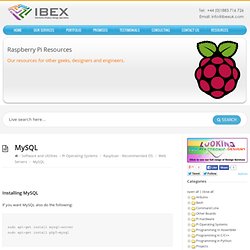 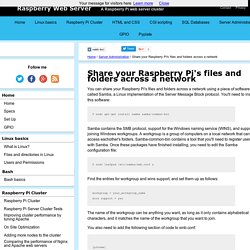 You'll need to install this software: $ sudo apt-get install samba samba-common-bin Samba contains the SMB protocol, support for the Windows naming service (WINS), and support for joining Windows workgroups. Using MySQL on a Raspberry Pi. SQLite is a great database for many situations, but there are times when it's not quite up to the job. 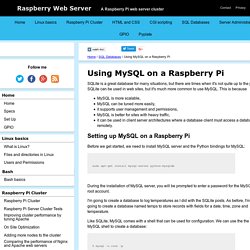 SQLite can be used in web sites, but it's much more common to use MySQL. Raspberry Pi Course Week 6 - Day 2( Understanding Databases - MySQL) This tutorial will teach you the basics of installing MySQL for the Raspberry Pi and will teach you a little about databases. 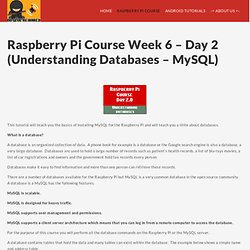 What is a database? A database is an organized collection of data. A phone book for example is a database or the Google search engine is also a database, a very large database. Databases are used to hold a large number of records such as patient’s health records, a list of blu-rays movies, a list of car registrations and owners and the government hold tax records every person. Databases make it easy to find information and more than one person can retrieve these records. Raspberry Pi web server - Home.

Raspberry Pi GPIO Sensing: Motion Detection. In previous tutorials, we outlined the basics behind physical computing and the Raspberry Pi by activating LEDs and scripts using a simple one button circuit. 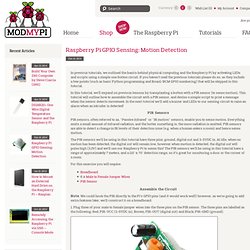 If you haven’t read the previous tutorials please do so, as they include a few points (such as basic Python programming and Board/BCM GPIO numbering) that will be skipped in this tutorial. Pentesting Distributions and Installer Kits for your Raspberry Pi. Raspberry Pi for pwning and penetration testing? Of course! Why not? As an introduction, Raspberry Pi is an ARM GNU / Linux box or a credit card size mini computer that can be plugged in to your TV using an HDMI cable then to your USB type of keyboard and mouse. Aside from office work, programming, personal usage, and gaming, it is also used by enthusiasts out there as a penetration testing box by installing Ubuntu or Debian Linux and a couple of tools for information gathering, vulnerability assessment, exploitation, maintaining access, reverse engineering, social engineering, forensic analysis and VOIP analysis. Basic TCP/IP networking reference guide - Raspberry Pi tutorials from PenguinTutor.

Introduction This reference guide will discuss the basics of TCP/IP networking. Although intended for an audience of Linux users and administrators, the contents of this will apply equally to other operating systems or networking devices. A future tutorial will provide the specific commands and files which provide the configuration on Linux systems. Although there are other types of network this guide will only cover TCP/IP networking. With the success of the Internet this is the dominant protocol in use almost exclusively today. "ArdiPi" Wireless Arduino and R-Pi Rover : Setting up the RaspberryPi Serial/Telnet Communication. To set up the transferring of Serial Data from the Pi to the Arduino will require you to open up a port for connection.

Remember when you ssh'd into your Pi and setup the wireless wifi connection? Well your going to need the ssh! Start off by opening Putty, or the iTerminal app for iPhone and iPad. Streaming video and microphone from Microsoft LifeCam. TD-T14ST2G2360-5 is a low price LCD module sold here. It has 128 x 128 pixels display. I tried using the LCD with Tiva LaunchPad EK-TM4C123GXL. Generic Device Driver. Raspberry Pi camera board – Gstreamer. So, my Raspberry Pi camera board has arrived and I have started playing with it. My first impressions were tiny, super cheap camera.

Its low light capabilities are not great but I can live with that. The important bit is the quality, full 1080p at 25 frames per second (UK). That on its own is pritty awesome. I was though only really interested in getting the pi to work remotely for my robot to replace the 3-4 fps standard def USB webcam I currently use. Streaming lag free 1080p 25fps video. Gstreamer. Communication - How to communicate the raspberry pi and the pc with one another via wireless.

How do I communicate the raspberry pi and the pc with one another via wireless? Presuming both systems have appropriate hardware available to them, this communication is governed by the Internet Protocol. Protocols are necessary to determine things like: