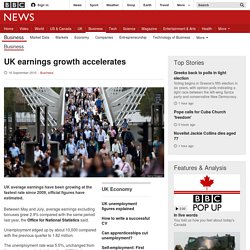 Including bonuses, average weekly earnings grew by 2.9%, although this was lower than the 3.3% growth rate seen in the three months to May. "The long-awaited upturn in pay, which has been the missing element of the UK's economic recovery, looks to be finally upon us, reviving the prospect of a rate hike by the end of the year," said Chris Williamson, chief economist at Markit. "Strip out the public sector, and private sector pay rose at an annual rate of 3.4% (both including and excluding bonuses) in the three months to July. Reduced discounting dampens high street fashion trade.

Beyond Greece, the world is filled with debt crises. With its shuttered banks, furious public protests and iconoclastic politicians, the plight of Greece, brought to its knees by a crippling debt burden, has been gripping and heartbreaking in equal measure: a full-blown sovereign debt crisis on the doorstep of some of the wealthiest countries in the world. 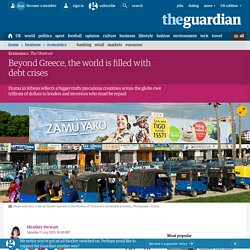 Yet new analysis by the Jubilee Debt Campaign reveals that Greece’s plight is far from unique: more than 20 other countries are also wrestling with their own debt crises. Many more, from Senegal to Laos, lie in a debt danger zone, where an economic downturn or a sudden jump in interest rates on world debt markets could lead to disaster. One of the lessons from the 2008 crash was that hefty debt levels can leave countries vulnerable to sudden shifts in market mood.

“Since 2012, there’s been a huge increase in sovereign debt, in Africa in particular,” she says. One vulnerable example is Tanzania, a country that suffered a severe debt crisis in the 1990s. . ■ Bhutan ■ Cape Verde ■ Dominica. US economic growth picks up to 2.3% - BBC News. The US economy grew at an annualised pace of 2.3% in the three months to June, official figures have shown. 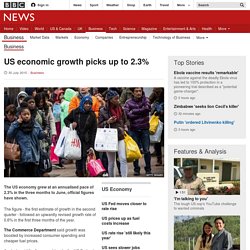 The figure - the first estimate of growth in the second quarter - followed an upwardly revised growth rate of 0.6% in the first three months of the year. The Commerce Department said growth was boosted by increased consumer spending and cheaper fuel prices. Analysts said the figure could make the US Federal Reserve more likely to raise interest rates in September. The 2.3% annualised growth rate is equivalent to 0.6% growth quarter-on-quarter, as measured in most other countries. For example, on Tuesday, official figures showed that the UK economy grew by an estimated 0.7% in the April-to-June period from the previous quarter. 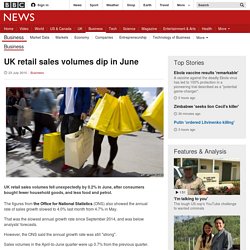 The figures from the Office for National Statistics (ONS) also showed the annual rate of sales growth slowed to 4.0% last month from 4.7% in May. That was the slowest annual growth rate since September 2014, and was below analysts' forecasts. However, the ONS said the annual growth rate was still "strong". Sales volumes in the April-to-June quarter were up 0.7% from the previous quarter. The value of online sales in June increased by 1.4% compared with May and accounted for 12.4% of all retail sales. Howard Archer, chief UK and European economist for IHS Global Insight, said June's sales data was "a little disappointing" but added that the figures were "not a body blow to improved second quarter growth hopes".

Many analysts have been expecting retail sales to do well, with recent statistics showing wage increases are picking up while inflation remains near zero.