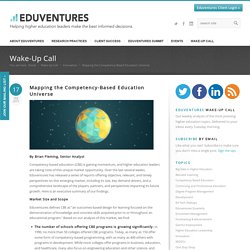 Over the last several weeks, Eduventures has released a series of reports offering objective, relevant, and timely perspectives on this emerging market, including its size, key demand drivers, and a comprehensive landscape of the players, partners, and perspectives impacting its future growth. Here is an executive summary of our findings. Market Size and Scope Eduventures defines CBE as “an outcomes-based design for learning focused on the demonstration of knowledge and concrete skills acquired prior to or throughout an educational program.”

The number of schools offering CBE programs is growing significantly. Mapping Out the CBE Landscape Using this resource will help you: Determine the right approach to CBE, and the optimal delivery model(s) to avoid the costly mistake of pursuing the wrong approach. Early glimpse at student achievement at College for America, a competency-based degree provider. A preliminary snapshot of the academic skills of students who are enrolled in a new, aggressive form of competency-based education is out, and the results look good. 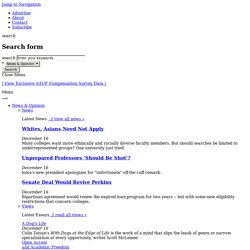 Southern New Hampshire University used an outside testing firm to assess the learning and skills in areas typically stressed in general education that were achieved by a small group of students who are halfway through an associate degree program at the university’s College for America, which offers online, self-paced, competency-based degrees that do not feature formal instruction and are completely untethered from the credit-hour standard.

The university was the first to get approval from the U.S. Department of Education and a regional accreditor for its direct-assessment degrees. A handful of other institutions have since followed suit. College for America currently enrolls about 3,000 students, most of whom are working adults. Barriers to competency-based education may be lifting, panel says. WASHINGTON – Competency-based higher education’s time may have arrived, but no college has gone all-in with a degree program that qualifies for federal aid and is based on competency rather than time in class. 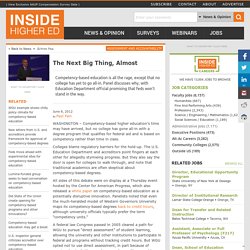 Colleges blame regulatory barriers for the hold-up. The U.S. Education Department and accreditors point fingers at each other for allegedly stymieing progress. But they also say the door is open for colleges to walk through, and note that traditional academics are often skeptical about competency-based degrees. All sides of this debate were on display at a Thursday event hosted by the Center for American Progress, which also released a white paper on competency-based education as a potentially disruptive innovation. A federal law Congress passed in 2005 cleared a path for WGU to pursue “direct assessment” of student learning, allowing the university and other institutions to participate in federal aid programs without tracking credit hours. “Who goes first?” U.S. inspector general criticizes accreditor over competency-based education. The U.S. 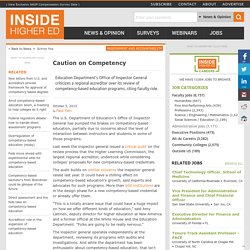 Department of Education’s Office of Inspector General has pumped the brakes on competency-based education, partially due to concerns about the level of interaction between instructors and students in some of those programs. Last week the inspector general issued a critical audit on the review process that the Higher Learning Commission, the largest regional accreditor, undertook while considering colleges’ proposals for new competency-based credentials. 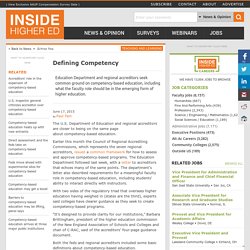 The Complete Guide to Competency-Based Education. Competency-Based Learning or Personalized Learning. Transitioning away from seat time, in favor of a structure that creates flexibility, allows students to progress as they demonstrate mastery of academic content, regardless of time, place, or pace of learning. 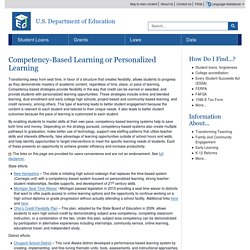 Competency-based strategies provide flexibility in the way that credit can be earned or awarded, and provide students with personalized learning opportunities. These strategies include online and blended learning, dual enrollment and early college high schools, project-based and community-based learning, and credit recovery, among others. The Shocking Truth About Competency Based Education.

I’ve been a fan of the idea of Competency Based Education since I first heard of it. 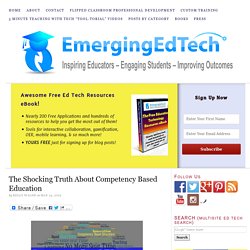 It seemed like such a positive development and a step ahead in the evolution of higher education here in the US and abroad. But I figured it would be quite a while (as in years, possibly quite a few years) before the country’s regional accreditors would become comfortable with assessing and approving CBE programs. In the U.S., colleges and universities need to be regionally accredited if they wish for students to be eligible for the federal education funds commonly referred to as Title IV aid (in the form of grants and loans). Many students simply can’t afford tuition at even the least costly colleges without some help from federal aid. Creating a New Higher Education Ecosystem Accredited CBE Programs are Growing at a Faster Rate Than Many Would Have Anticipated. First, I came across this regionally-accredited CBE program from the University of Wisconsin, the “UW Flexible Option“.

About Kelly Walsh. Competency-based Education Programs. Institutions interested in ensuring that competency-based education programs are eligible for Title IV are required to obtain approval from their regional accreditor and may also need to file an application for approval with the U.S. 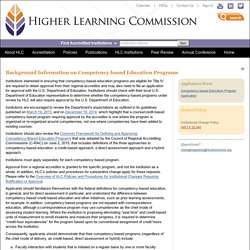 Competency-Based Education. One in five people in this country right now – over 43 million – have some college credit but no degree. 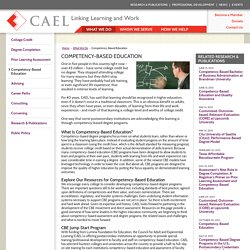 They stopped attending college for many reasons, but they didn’t stop learning. They have probably had job training, or even significant life experience, that resulted in intense levels of learning. For 40 years, CAEL has said that learning should be recognized in higher education, even if it doesn't occur in a traditional classroom. Accreditors' role in the expansion of competency-based education. WASHINGTON -- A surge in new competency-based degree programs has created challenges for the accreditors tasked with approving them. 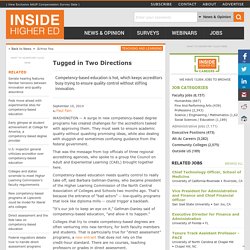 They must seek to ensure academic quality without quashing promising ideas, while also dealing with sluggish and sometimes confusing guidance from the federal government. That was the message from top officials of three regional accrediting agencies, who spoke to a group the Council on Adult and Experiential Learning (CAEL) brought together here. Competency-based education needs quality control to really take off, said Barbara Gellman-Danley, who became president of the Higher Learning Commission of the North Central Association of Colleges and Schools two months ago.

That’s because the entrance of “bad actors” -- low-quality programs that look like diploma mills -- could trigger a backlash. “It’s our job to keep an eye on it,” Gellman-Danley said of competency-based education, “and allow it to happen.” Competency-based education and regional accreditation. Historians of this period, possessing the clearsightedness that only time provides, will likely point to online learning as the disruptive technology platform that radically changed higher education, which had remained largely unchanged since the cathedral schools of medieval Europe -- football, beer pong and food courts notwithstanding.