Why Slums Could Be The Key To Sustainable Urban Energy System Transformation. This is a community post, untouched by our editors. 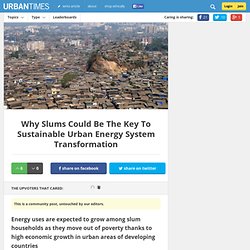 Over the past few years, anthropogenic climate change has become a central issue worldwide. There is a consensus now that rapid global warming by more than 2°C would overburden societies’ capacity to adapt. In order to restrict global warming to a mean temperature change of 2°C a fast transformative counteraction is required. In the words of Westley et al. (2011) – “…the transformative development may require radical, systemic shifts in deeply held values and beliefs, patterns of social behavior, and multi-level governance and management regimes”. Therefore the global energy system must fundamentally be decarbonized by 2050. Today more than half of the world’s total population is living in the cities. Only 30% of the world’s population was urban in 1950. At the start of the twentieth century, only 16 cities mainly from the advanced industrial economies in the world had a million people or more.

China's Tanka boat people's floating homes. Ancient fishing people in China have built a village on water home to thousands The Tanka people, named 'gypsies of the sea', live in floating homes and seafood farms By Daily Mail Reporter Published: 13:23 GMT, 9 October 2013 | Updated: 19:39 GMT, 9 October 2013 This community in southeast China is home to 7,000 fishermen refusing to conform to modern lives, remaining in their traditional floating homes on the sea. 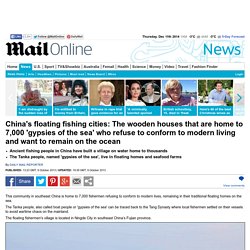 The Tanka people, also called boat people or 'gypsies of the sea' can be traced back to the Tang Dynasty where local fishermen settled on their vessels to avoid wartime chaos on the mainland. The floating fishermen's village is located in Ningde City in southeast China’s Fujian province. Working the waves: Named the 'gypsies on the sea', the fishermen in Fujian lives by the same traditions as their ancestors. Finding 'Life, Death And Hope' In A Mumbai Slum. Next to Mumbai's bustling international airport, a boy picks through refuse, looking for pieces he can recycle and sell to support his family of 11. 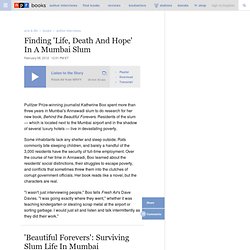 He is a resident of Annawadi, a slum built on a patch of reclaimed swampland — now fringed by luxury hotels. As economists and activists fret over increasing income inequality in America, scenes like this one from journalist Katherine Boo's new book, Behind the Beautiful Forevers, are a forceful reminder of the extreme disparity of wealth that exist all over the world — and what people must do to survive. Boo, a Pulitzer Prize-winner who earned acclaim for her pieces on poverty in America, became a regular visitor to Mumbai after she married a man from India.

She tells Morning Edition's Steve Inskeep how she felt compelled to investigate further after witnessing the struggles of Mumbai's poor. Slum Children’s Capacity to Aspire – Policy Lessons. In my previous post, I presented my initial thoughts after reading Katherine Boo’s recent book “Behind the Beautiful Forevers: Life, Death, and Hope in a Mumbai Undercity”. 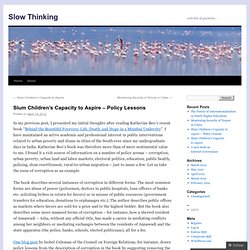 I have maintained an active academic and professional interest in public interventions related to urban poverty and slums in cities of the South ever since my undergraduate days in India. Katherine Boo’s book was therefore more than of mere sentimental value to me. Slums - Theory. Favelas / Slum. Cities Alliance Home Page. Slum Dwellers International. Slum Dwellers International (SDI) is a global non-governmental organization (NGO) started in 1996 that manages networks of the urban poor and slum dwellers that are organized into federations and which are usually based in the Global South. 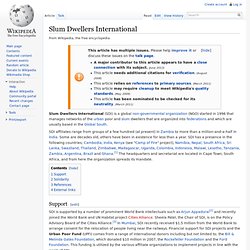 SDI affiliates range from groups of a few hundred (at present) in Zambia to more than a million-and-a-half in India. Some are decades old, others have been in existence for less than a year. SDI has a presence in the following countries; Cambodia, India, Kenya (see "Camp of Fire" project), Namibia, Nepal, South Africa, Sri Lanka, Swaziland, Thailand, Zimbabwe, Madagascar, Uganda, Colombia, Indonesia, Malawi, Lesotho, Tanzania, Zambia, Argentina, Brazil and Ghana.[1] The headquarters and secretariat are located in Cape Town, South Africa, and from here the organization spreads its mandate. Support[edit] Solidarity[edit] References[edit] External links[edit]

International Institute for Environment and Development. SDINet.org - Welcome to Shack/Slum Dwellers International. About Slum Upgrading. What are slums? 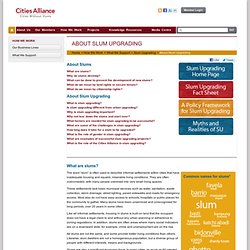 Most also do not have easy access to schools, hospitals or public places for the community to gather. Many slums have been unserviced and unrecognised for long periods, over 20 years in some cities. Like all informal settlements, housing in slums is built on land that the occupant does not have a legal claim to and without any urban planning or adherence to zoning regulations. All slums are not the same, and some provide better living conditions than others.