Mzaalo is the most trusted app for watching free movies online. Find all the latest blockbusters and the old classics here. Browse its ever-increasing library and stay entertained.

Have You Watched Side Hero Web Series Online On Mzaalo Yet? - Mzaalo. Coming from the prestigious Ramesh Sippy Entertainment Production and directed by Rohan Sippy, you can expect something worthwhile from this web series titled Side Hero. 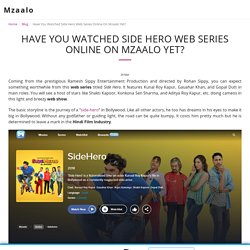 It features Kunal Roy Kapur, Gauahar Khan, and Gopal Dutt in main roles. You will see a host of stars like Shakti Kapoor, Konkona Sen Sharma, and Aditya Roy Kapur, etc. doing cameos in this light and breezy web show. The basic storyline is the journey of a “side-hero” in Bollywood. Like all other actors, he too has dreams in his eyes to make it big in Bollywood. Without any godfather or guiding light, the road can be quite bumpy. The makers of this comedy web series have calculatedly cast Aditya Roy Kapur in this role who as the trailer says, “But who will watch him?” This is where the strength of this online web series lies. With the expansion of OTT platforms in India, the audience is getting every kind of show that was a strict NO for big screens. Bollywood News: RGV Reveals The Reason Behind Not Casting SRK & Salman Khan In Satya: ext_5623039 — LiveJournal.

The 1998 Bollywood action crime drama Satya is one of the most-loved ‘90s cinema. 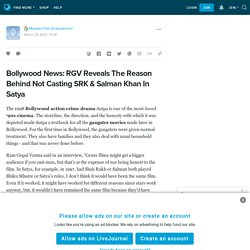 The storyline, the direction, and the honesty with which it was depicted made Satya a textbook for all the gangster movies made later in Bollywood. For the first time in Bollywood, the gangsters were given normal treatment. They also have families and they also deal with usual household things - and that was never done before. Ram Gopal Varma said in an interview, “Genre films might get a bigger audience if you cast stars, but that's at the expense of not being honest to the film. In Satya, for example, in 1997, had Shah Rukh or Salman both played Bhiku Mhatre or Satya's roles, I don't think it would have been the same film. Perhaps for this very reason, Satya became a benchmark among the filmmakers of that time and the next generation. Birthday Special: 7 Things You Didn't Know About Ratna Pathak Shah.

Born on 18th March 1957, Ratna Pathak Shah is one of the most powerful actresses of Indian Cinema. 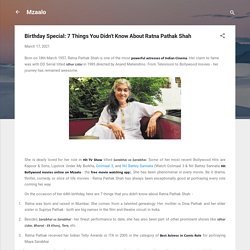 Womens Day: 5 Bollywood Actresses Who Have Made a Difference With Their Choice Of Roles - MZAALO. In a typical Bollywood movie, the hero or the lead actor is given more screen time and importance than the lead actress. 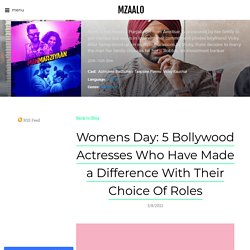 This has remained an unsaid norm for a long time. And our societal setup and general treatment towards women are somewhere responsible for that. Time has changed and so has the position of a woman in our society and that’s why the role of Bollywoodactresses in movies has also changed.All this didn’t happen overnight. Bollywood News: Alia Bhatt Wishes Sanjay Leela Bhansali on His Birthday with the Teaser of Gangubai Kathiawadi. Go Back to Your Bachpan with These Movies Online on Mzaalo. Who doesn’t like childhood days? 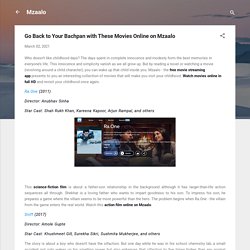 The days spent in complete innocence and modesty form the best memories in everyone’s life. This innocence and simplicity vanish as we all grow up. But by reading a novel or watching a movie (revolving around a child character), you can wake up that child inside you. Mzaalo - the free movie streaming app presents to you an interesting collection of movies that will make you visit your childhood. Watch movies online in full HD and revisit your childhood once again. The List of Movies that are all about “Trip to Remember” On Mzaalo: ext_5566133 — LiveJournal. “We travel not to escape from life but for life not to escape us” Travel is one of the finest experiences in life. 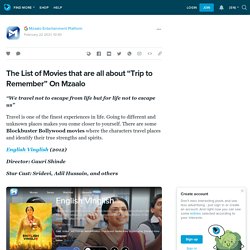 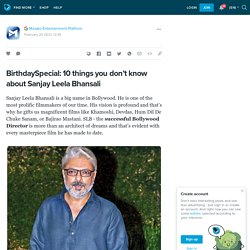 He is one of the most prolific filmmakers of our time. His vision is profound and that’s why he gifts us magnificent films like Khamoshi, Devdas, Hum Dil De Chuke Sanam, or Bajirao Mastani. SLB - the successful Bollywood Director is more than an architect of dreams and that’s evident with every masterpiece film he has made to date. It’s his 58th birthday on 24th February 2021 and here are some unknown facts about the blockbuster director of Bollywood: - 1. 2. 3. 8 Things to Know About The Fast Bowler & Mzaalo Pune Devils Member Mohd. Amir. Mohammad Amir played for the Pakistan cricket team from 2009 to 2020 and retired from international cricket on 17th December 2020. 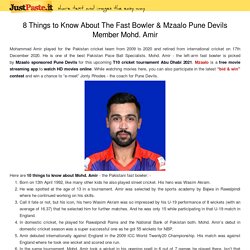 He is one of the best Pakistan Pace Ball Specialists. Mohd. Amir - the left-arm fast bowler is picked by Mzaalo sponsored Pune Devils for this upcoming T10 cricket tournament Abu Dhabi 2021. Mzaalo is a free movie streaming app to watch HD movies online. While watching movies here, you can also participate in the latest “bid & win” contest and win a chance to “e-meet” Jonty Rhodes - the coach for Pune Devils. Here are 10 things to know about Mohd. Born on 13th April 1992, like many other kids he also played street cricket. Pune Devils cricket team partners with Mzaalo for Abu Dhabi T10 League 2021 – OTT WATCHER.

Mumbai: Blockchain-based video and entertainment ecosystem Mzaalo has partnered with the Pune Devils cricket team, and will lead the team’s tokenization and fan engagement efforts as it establishes a new fanbase. 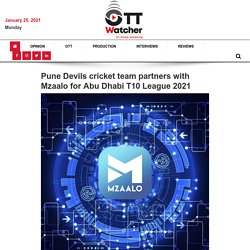 Mzaalo will create Pune Devils’ bespoke digital assets, allowing the team to enhance its brand power and fans to engage with their favorite cricket team in a way that they never have before. In the upcoming season of the Abu Dhabi T10 Cricket League – which is held between January 28 and February 6 in the iconic Zayed Cricket Stadium, Abu Dhabi – fans will get their first chance to interact with the Pune Devils token ecosystem that Mzaalo has created. Why Spend Money When You Can Watch Movies For Free? Mzaalo.