Summer holidays 2017 final. Exam guidance - NAS. Here we explore some of the particular challenges autistic pupils and students might face during exams, and what may help. 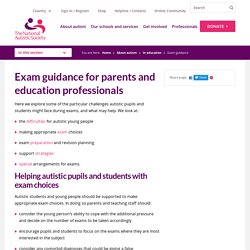 We look at: the difficulties for autistic young people making appropriate exam choices exam preparation and revision planning support strategies special arrangements for exams. Helping autistic pupils and students with exam choices Autistic students and young people should be supported to make appropriate exam choices. In doing so parents and teaching staff should: consider the young person’s ability to cope with the additional pressure and decide on the number of exams to be taken accordingly encourage pupils and students to focus on the exams where they are most interested in the subject consider any comorbid diagnoses that could be giving a false representation of their abilities, eg hyperlexia. ‘I saw being autistic as an employment opportunity, not a weakness’

Jonathan Andrews was once advised to hide his autism from prospective employers. 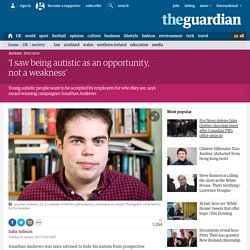 Instead, he is making his name by doing just the opposite. “I saw it [being autistic] as an opportunity, not a weakness,” says Andrews, 22, who recently won campaigner of the year at the European Diversity Awards 2016. The law graduate, who starts as a trainee solicitor at Reed Smith in August, says: “I wanted to work somewhere that wouldn’t see the word ‘autism’ on an application and think, ‘This is terrible.’ The ones [prospective employers] that took it in their stride were the best workplace environments, rather than places that talk about it [autism] all the time, because they think you’re this strange, exotic creature.” Although there are some 700,000 people on the autism spectrum in the UK, the condition is widely misunderstood. Advice for autistic adults about work - NAS. People with autism have some very valuable skills which can be applied in the workplace. 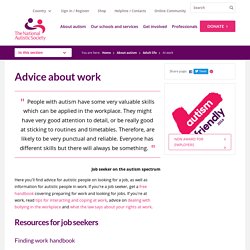 They might have very good attention to detail, or be really good at sticking to routines and timetables. Therefore, are likely to be very punctual and reliable. Roadmap to Transition A Handbook for Autistic Youth Transitioning to Adulthood. Navigating the PDA Journey. Calming Cards. GoZenPlus 50CalmDownFlashcards (1) TCC Imagine Relaxing Pictures. TCC Think Positive Thoughts. VIDEO: AsIAm Says Hi - What supports are available to students with Autism? - asiam.

There is so many different people and organisations doing great things to support people with Autism but sometimes, because our community is so large and vibrant, we can all miss things or would love to learn more about a particular opportunity. 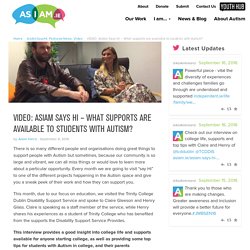 Every month we are going to visit “say Hi” to one of the different projects happening in the Autism space and give you a sneak peek of their work and how they can support you. This month, due to our focus on education, we visited the Trinity College Dublin Disability Support Service and spoke to Claire Gleeson and Henry Glass. Claire is speaking as a staff member of the service, while Henry shares his experiences as a student of Trinity College who has benefited from the supports the Disability Support Service Provides.

Autistic Spectrum Disorders Toolkit. Autism is a neurodevelopmental disorder that affects at least 1% of the population. 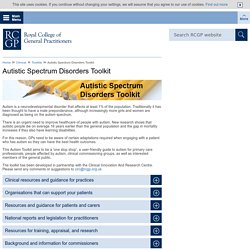 Traditionally it has been thought to have a male preponderance, although increasingly more girls and women are diagnosed as being on the autism spectrum. There is an urgent need to improve healthcare of people with autism. New research shows that autistic people die on average 16 years earlier than the general population and the gap in mortality increases if they also have learning disabilities.

For this reason, GPs need to be aware of certain adaptations required when engaging with a patient who has autism so they can have the best health outcomes. Guideline 145: Assessment, diagnosis and interventions for. Thespectrum.pdf. Eating disorder or disordered eating PDF. Teaching Aids for Children with Special Needs - Educate Autism. Resources - Girls and Autism: Flying Under the Radar. This guide aims to: - introduce the debate around autism and gender - identify key issues for girls with autism spectrum conditions - provide practical school-based support strategies - share family, professional and academic perspectives. 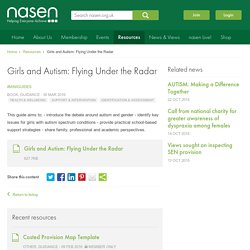 Return to listing Recent resources Costed Provision Map Template Other, Guidance - 09 Feb 2016 Member Only This costed provision map template has been designed to help you with provision management in your setting i.e. to record, monitor and evaluate SEND provision. Asperger's books for girls, women and neurotypical loved ones. 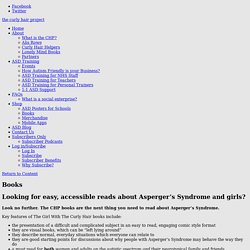 The CHP books are the next thing you need to read about Asperger’s Syndrome. Key features of The Girl With The Curly Hair books include: Effective teaching. Do2Learn: Educational Resources for Special Needs. FACELAND uses an Amusement Park theme to engage and motivate. 6 “Schools” introduce concepts as “clues” and 11 game-like activities offer practice that is fun! 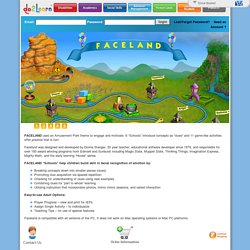 Autism Toolkits. Life on the spectrum. Evidence Based Practices for Youth in Transition. Sensory processing simulation. Sensory sensitivity. Internet Safety Parent Guide. I’m an Adult on the Spectrum, so Please Stop Treating Me Like a Child. So many times I have been treated differently because people have heard the word autism associated with me. 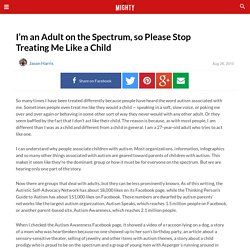 Sometimes people even treat me like they would a child — speaking in a soft, slow voice, or poking me over and over again or behaving in some other sort of way they never would with any other adult. Or they seem baffled by the fact that I don’t act like their child. The reason is because, as with most people, I am different than I was as a child and different from a child in general. I am a 27-year-old adult who tries to act like one. I can understand why people associate children with autism. Now there are groups that deal with adults, but they can be less prominently known. My Asperger's makes living with other students a struggle. Starting university is a big step for everyone, but for me it was a little more daunting as I have Asperger’s syndrome. 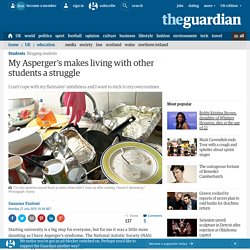 The National Autistic Society (NAS) describes the condition as a “hidden disability” because you can’t tell from someone’s appearance that they have it. The main symptoms of the condition, which is a form of autism, are problems with social communication, interaction and imagination. Some common characteristics include a love of routines, having special interests and sensory difficulties. Asperger’s made living with other students a challenge during my first year at university, which I have just completed. Autism Daily News online news. Autism Daily Newscast is an official Google News site. It is independently owned and operated. We report on current events of interest and importance to those on the autism spectrum and those who love them. Our main focus is on current issues around health concerns, life style, latest research and technology as it relates to autism spectrum disorder. Our goal is to provide useful and valuable information that is written in an easy to understand format.

Other topics include entertainment, education, careers, politics and interesting people profiles. Look Me In The Eye. I'm autistic. When you assess my needs, this is what you must know. As a person with autism, when I have had dealings with social care professionals during assessments and other meetings, I have found them in the most part to be perfectly competent.

But there are often several small things that let them down – or rather things that may seem small to them. These details can have a massive impact on how the autistic individual feels during and after an assessment or meeting. They may appear to be basic, but it is incredible how many professionals would benefit from adopting them. Time limits I had an appointment a few months ago with a psychologist to assess the help I would need at university. Autism as a disABILITY Adam Harris. Asperger's Syndrome. Being a Student Progressing through College. Progressing through College: Being an Undergraduate Transitioning from secondary school to third level education and experienced your first year as an undergraduate student presents a challenging experience for many students. In particular, moving from a strictly ordered regime of classes and homework to a setting where class attendance is mostly optional and coursework assigned weeks before the deadline is quite shocking for new students.

It is therefore very important for new students to establish a strong work ethic and sense of discipline, as far too often students decide to skip classes and enjoy themselves before getting a rude awakening during their first set of exams or missed assignment deadline. That is not to say that students should forego socialisation and co-curricular activities entirely. Indeed, a large part of the ‘college experience’ involves engagement with other students and societies. Sensory Processing Disorder. 5 Tips for New College Students with Disabilities. MY SON'S NOT RAINMAN - Blog. College and university: supporting students with AS. Introduction This information sheet is for staff in higher education establishments and universities who currently, or who may in the future, support students with Asperger syndrome or high-functioning autism (HFA). It is relevant for all staff, but in particular for lecturers, tutors, disability advisers, needs assessors and careers staff.

Dual Exceptionality - Aspergers. What Lies Beneath! I have searched for years, twelve to be exact, to find out why my beautiful, smart, generous, creative daughter found some every day things really difficult. Why she wouldn’t run to the local shop for a message when other youngsters her age would have been delighted with the opportunity to nip out to the shop. Why she could make friends, but had difficulty keeping them. Why every birthday, Christmas, celebration was a nightmare with over excitement. Why she had massive temper tantrums way, way, way beyond the normal terrible two’s and three’s. We always knew she was bright, she walked early, talked early, asked millions of questions, had fantastic memory and loved to read. I got suspicious that something was amiss when she was about nine years old. When she went into secondary school she began to be ill each morning. Living with Asperger's in college.

Starting out at college is a tricky time for all people, no matter what your personality is like. However, when you have Asperger’s Syndrome as well, it does make it more difficult. Asperger Syndrome - University College Cork. Definition: Autism Spectrum Disorder (ASD) is a term that is used to describe a series of pervasive developmental, neurological disorders including Autism, Asperger Syndrome/High Functioning Autism (HFA), Pervasive Developmental Disorder-Not Otherwise Specified (PDD-NOS).