Questionnaire: Are You Addicted to Social Networking Sites? By: Beth Morrisey MLIS - Updated: 23 Nov 2020| *Discuss Social networking sites like My Space, Facebook and Twitter can be great resources for staying in touch with friends, but they should never become a substitute for physical interaction with others. 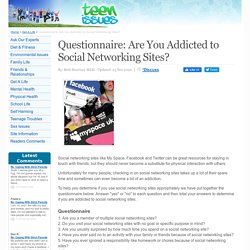 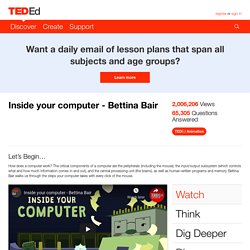 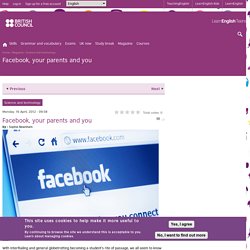 It doesn’t matter where you are in the world; you always seem to be within reach of it. With new technology meaning your exact location can be pinpointed and published online in seconds; how do you feel about your every movement being made visible for the world (and possibly your parents) to see? With InterRailing and general globetrotting becoming a student’s rite of passage, we all seem to know someone who is mountain climbing in Tanzania or relaxing on a beach in Thailand. And how do we know this? Well, apart from some pre-trip bragging, you and everyone else on Facebook can flick through the photos and be alerted to the changes in location as your friends travel the world. So, is this a good thing? Yet there lies The Big Problem: it is now within your parents’ power to know everything about your social life.

Parents have caught up with this internet sensation, and are making up for lost time too. The secret of being allowed on Facebook for hours. There are many different social network sites in use today, but none have changed the way in which we communicate more than Facebook. 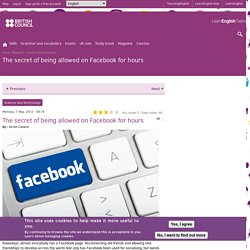 Facebook has surprised many people, and changed our lives in more ways than could have been imagined. Nowadays, almost everybody has a Facebook page. Reconnecting old friends and allowing new friendships to develop across the world. Not only has Facebook been used for socialising, but bands promote their music, religious groups have their own page, shops can now sell their products through Facebook and even political parties are using Facebook to great advantage. Facebook was said to have helped Obama to gain election but what does Facebook mean to you?

I asked some of my students at the Liceo Scientifico in Rutigliano, Italy of their opinions of Facebook. Almost all the students I asked have a Facebook account. In this way Facebook is very useful tool to enhance your English learning. Skype: more important than it looks. My computer desktop is a bit like my handbag: it’s full of things I either don’t need or don’t use, it looks untidy, and I’m not quite sure where a lot of the stuff has come from. 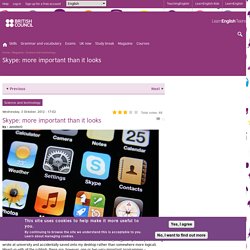 Looking at my desktop now, I can see, for example, a programme called ‘Easy Network Manager’ (no idea what that is), one called ‘DivX Movies’ (never used it), and a Microsoft Word document called ‘romeo_and_juliet’ (probably something I wrote at university and accidentally saved onto my desktop rather than somewhere more logical). Mixed up with all the rubbish, there are, however, one or two very important programmes – programmes which I feel even have a central role in my life. To go back to my handbag, these programmes would be the equivalent of my house keys and purse. They are the things which I use on a daily basis, and which I would be most upset about losing. One of the programmes I am talking about is Skype. I first realised the importance of Skype when I was in my third year of university. Is it acceptable to delete friends from Facebook? This question is something that often seems to be talked about among friends. 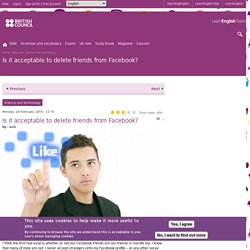 Most of my own friends think that there is nothing wrong with it, but others – including my mother – think deleting Facebook friends should be a capital offence. I think the first real issue is whether or not our Facebook friends are our friends in real-life too. I know that many of mine are not: I never accept strangers onto my Facebook profile – or any other social network, for that matter. At the same time, though, I would not call many of my Facebook “friends” actual friends.