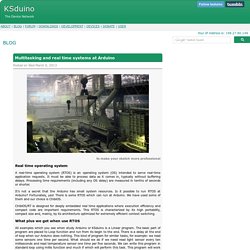 It must be able to process data as it comes in, typically without buffering delays. Processing time requirements (including any OS delay) are measured in tenths of seconds or shorter. It’s not a secret that the Arduino has small system resources. ChibiOS/RT is designed for deeply embedded real time applications where execution efficiency and compact code are important requirements. What plus we get when use RTOS All examples which you see when study Arduino or KSduino is a Linear program. When we use RTOS we can create separate processes (threads). Setup RTOS and create sketches How the RTOS for Arduino looks and what we will use to create programs?

OK, Let us download ChibiOS and create your first ChibiOS Arduino sketch! We get the ChibiOS from page. There is direct download link, we use version ChibiOS20130208: RTOS — Illustrated Blog on Embedded Software Architecture. Real time multitasking con arduino. Embedded software. Real-time systems. Embedded software. Debounced Buttons. Rating: 0.0/10 (0 votes cast) A button-driven handbrake Buttons (or switches, or keys) are quite common in the world of the embedded systems.

In most cases buttons trigger a software action and – in our context – we will use buttons for configuring the settings of the charge controller. We can also use the buttons as a debugging utility. The high-level API is easy: /*! Since our buttons are GPIO-based the most basic (but naive!) Nothing more useful than a practical example to explain what would be wrong with the above implementation.

My Opel Zafira This car actually has a handbrake… which is button-driven! Handbrake release handbrake pull up Now it becomes interesting. It would be unacceptable if the handbrake is ‘pulled up’ or ‘released’ accidentally: by an (electronic) glitch, orby a involuntary user click. In addition: rapid ‘on/off’ behaviour is undesirable. So how does Opel’s ‘debouncer’ look like? To pull up the handbrake, a long press is required (I guess a few hundreds of milliseconds). 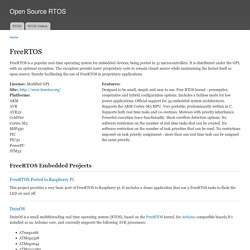 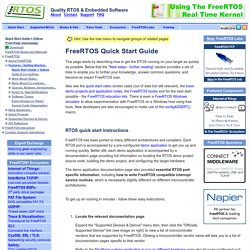 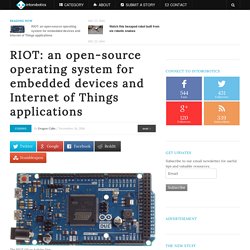 The robots are a large part of this industry together with millions of makers and hackers. The RIOT is an open-source operating system designed to solve three problems: data, network, and embedded hardware. All these three resources are highly related one with each other in the IoT space. The operating system has functions based on a microkernel architecture with support for real-time and multi-threading applications. The RIOT runs on any 16/32-bit hardware as a Linux or MacOS process, which facilitates the use of standard development and debugging tools (GNU Compiler Collection (GCC), GNU Debugger, Valgrind, Wireshark). With origins in the FeuerWare OS and developed by FU Berlin, INRIA and the HAW Hamburg, the operating system has been reinvented and released again by Atmel.