Singapore teen jailed for YouTube rant. Food, glorious food: Olympic athletes' extreme eating habits. Athletes face big food temptations in the Olympic Village dining hallIt is open 24 hours and can seat 5,000 people, serving 60,000 daily mealsMany competitors have extreme eating habits but taper off at Games timeThey have to be responsible for everything they put in their mouth, says dietitian (CNN) -- Swimming superstar Michael Phelps once claimed he scoffed up to 12,000 calories a day. 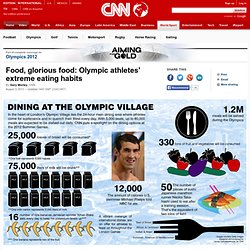 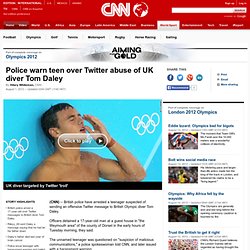 Officers detained a 17-year-old man at a guest house in "the Weymouth area" of the county of Dorset in the early hours of Tuesday morning, they said. The unnamed teenager was questioned on "suspicion of malicious communications," a police spokeswoman told CNN, and later issued with a harassment warning. How to choose a healthy breakfast cereal. Are the 'healthy' cereals really healthy or just misleadingly advertised? 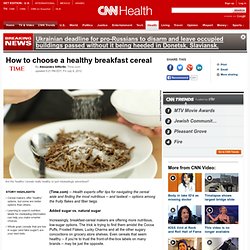 Cereal makers offer 'healthy' options, but some are better options than others. Learning to search nutrition labels for misleading information can help you make smarter choices. Whole grain cereals that are low in sugar (and fake sugar!) The 5 rules of working from home. Before you commit to working from home, make sure it's a good fit for your lifestyle. 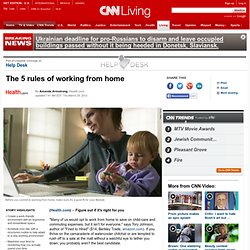 Create a work-friendly environment with an ergonomic and streamlined spaceSchedule your day with a structured routine to help adapt to a new working environmentMaximize your time by monitoring how you actually spend your time (Health.com) -- Figure out if it's right for you "Many of us would opt to work from home to save on child-care and commuting expenses, but it isn't for everyone," says Tory Johnson, author of "Fired to Hired" ($14, Berkley Trade, amazon.com).

If you thrive on the camaraderie of watercooler chitchat or are tempted to rush off to a sale at the mall without a watchful eye to tether you down, you probably aren't the best candidate. 4 Cambodian temples that aren't Angkor Wat. At the turn of the millennium, when Cambodia was still reeling from decades of civil war, one could spend hours walking around Angkor Wat Archaeological Park without seeing a single foreigner. 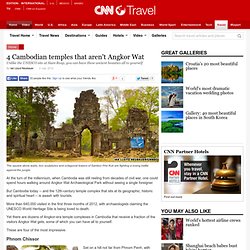 But Cambodia today -- and the 12th-century temple complex that sits at its geographic, historic and spiritual heart -- is awash with tourists. 10 shocking medical mistakes. Click through this gallery to see stories of ten patient cases involving medical mistakes. 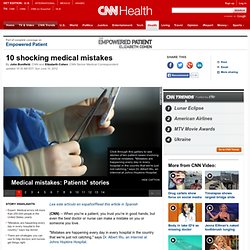 "Mistakes are happening every day in every hospital in the country that we're just not catching," says Dr. Albert Wu, an internist at Johns Hopkins Hospital. Kerry Higuera was given a CT scan of her abdomen even though she was three months pregnant. The hospital had confused her with another patient also named Kerry, who was actually supposed to get the scan. The needless imaging increased the risk that Higuera's unborn baby would get leukemia or have birth defects. General anesthesia in infancy linked to higher risk of ADHD. 7-year-old Georgia girl died of head trauma, stabbing, investigators say. NEW: Jorelys Rivera likely died 1 to 1 1/2 hours after she disappearedShe died of blunt force trauma to the head, investigators sayJorelys, 7, had also been stabbed and sexually assaultedThe killer likely lives in or has ready access to the apartment complex , authorities say Atlanta (CNN) -- A 7-year-old girl whose body was found in a trash bin outside her Georgia apartment building died of blunt force trauma to the head, was stabbed and had been sexually assaulted, authorities said Tuesday. 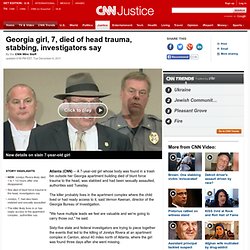 The killer probably lives in the apartment complex where the child lived or had ready access to it, said Vernon Keenan, director of the Georgia Bureau of Investigation. Young vegetarians: Getting the nutrition they need. It's important to have enough variety in your diet that you can be well-nourished, experts say. 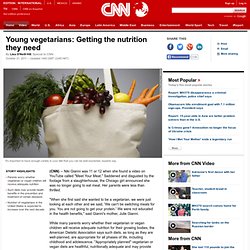 Parents worry whether vegetarian or vegan children will receive adequate nutrition Such diets may provide health benefits in the prevention and treatment of certain diseasesNumber of vegetarians in the United States is expected to increase over the next decade. Moving out of high-poverty areas may lower obesity, diabetes risk. Research has linked obesity to neighborhood features such as the number of supermarkets and fast-food restaurants. 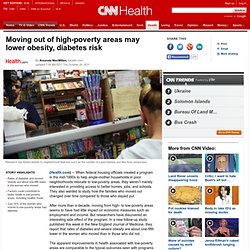 Rates of diabetes and severe obesity are about one-fifth lower in the women who movedFactors could contribute to better health in low-poverty areas, including healthy foods Just 16% of the women who moved to low-poverty areas had diabetes (Health.com) -- When federal housing officials created a program in the mid-1990s to help single-mother households in poor neighborhoods relocate to low-poverty areas, they weren't merely interested in providing access to better homes, jobs, and schools. They also wanted to study how the families who moved out changed over time compared to those who stayed put. After more than a decade, moving from high- to low-poverty areas seems to have had little impact on economic measures such as employment and income.

"For this program, health improvements were not the primary goal," Ludwig says. Health.com: 11 ways to save money on healthy food. Why teens are wired for risk. Hillary Tillotson, 19, and Tessa, 15, are sisters who have acted out as teens. 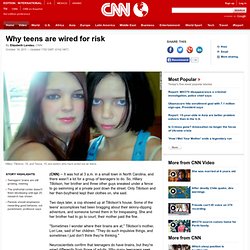 Teenagers' brains are still growing, rewiringThe prefrontal cortex doesn't finish developing until age 25, research has shownParents should emphasize rewarding good behavior, not punishment, professor says. Fewer U.S. babies being born early, report says. The report says 40,000 fewer babies were born prematurely in the U.S. between 2006 and 2009The report says 16 states received a B and 19 received a CThe report says 11 states along with the District of Columbia were given a D, and three states and Puerto Rico failedThe report says Vermont was the only state to get an A (CNN) -- When it comes to babies being carried to full term, the United States is improving, according to the most recent March of Dimes report card.

This year the United States achieved a C grade, a grade higher than the D grade of 2010. Each year, the March of Dimes compares each state's pre-term birth rate with the goal birth rate. The report says 40,000 fewer babies were born prematurely in the United States between 2006 and 2009. N.C. officials lower number of E. coli infections linked to state fair. Number of confirmed and suspected cases is at 24Figures revised because of new criteria applied to the outbreakThe outbreak appears to be slowing, a health official says (CNN) -- North Carolina public health officials revised Monday the number of confirmed and suspected cases of E. coli infection in an outbreak that appears to be linked to the state fair.

Nine cases have been confirmed and another 15 cases are under investigation, according to North Carolina Division of Public Health spokeswoman Julie Henry. That's two fewer cases than health officials initially released. Stupid things parents do that put their kids at risk. Julie Perrault shares a moment with her kids, clockwise from top, Claire, David, Cate and Edwin. Experts: Parents should slow down when it comes to car seats and stay in right size Sleeping too long in sitting position makes it hard for a baby to get enough oxygen, they sayPediatricians' group warns parents not to heat baby bottles in microwaves (CNN) -- Julie Perrault shudders when she remembers some of the dumb things she did when her kids were babies. The mother of four recalls in horror how she used to put her twin babies, David and Cate, in chairs and then put the chairs on top of the dining room table to feed the kids.

Why is infant mortality still a U.S. problem? The U.S. infant mortality rate is one of the highest among all developed countries. Deborah Klein Walker says infant mortality rates in U.S. remain unacceptably highThe U.S. ranks 31st in developed nations for infant mortalityWalker: Rate for blacks in U.S. highest; funds for prevention programs regularly face cutsShe says policymakers must make funding for women and infant programs a policy priority Editor's note: Deborah Klein Walker, vice president and senior fellow at Abt Associates, a global research and program implementation firm, is a past president of the American Public Health Association and also the Association for Maternal and Child Health Programs.

(CNN) -- If a measure of a successful society is its ability to prevent infant deaths, then there is an ugly truth in the United States today that public health officials know but the public largely does not: Too many of our babies are dying, and they don't have to. Deborah Klein Walker We need it all.