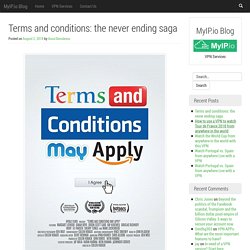 It’s also the name of a Netflix documentary that goes on exposing the truth behind pages upon pages of uninviting text that we usually give a swift scroll, followed by a vacant “I agree” click. Produced in 2013 by Cullen Hoback, the film is relevant today as online service providers everywhere, starting with the biggest, most popular names, are proving ambiguous practice when collecting users and customers information. Today, we simply expect our data to be used without our knowledge or consent when surfing a website, installing a software or purchasing goods online. It has become so much of a given that keeping track of all privacy policies of all the sites we use on a regular, would consume enormous attention, the grey matter that we are seemingly using less and less while online or at least on definite, short spans. Watch Portugal vs. Spain from anywhere Live with a VPN. How to live stream World Cup Games for free, Key players and Game Schedules When it comes to Spain and Portugal facing this year’s World Cup duel is pretty hard to come up with clear predictions, as both teams are equally seen as favorites. 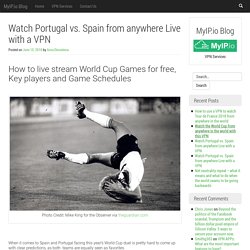 Of all 36 occasions the two teams have met, the Portuguese national team claimed 8 wins and 12 draws, while suffering 18 defeats. This year, Spain goes agains the iberian rival Portugal with last minute changes to its management. Following their erstwhile manager sacking, barely 48 hours before this big league occasion, the former World Champions are still expected to give a good show today in Russia. Watch the World Cup from anywhere in the world with this VPN. Photo Credit: Argentina player Daniel Passarella being carried aloft with the World Cup in 1978 theguardian.com We are nine days into the Word Cup 2018 in Russia and it’s already almost over for Messi and Argentina. 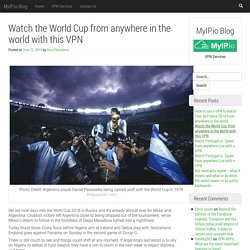 How to use a VPN to watch Tour de France 2018 from anywhere in the world. Photo: Chris Froome and Team Sky celebrate winning the 2015 Tour de France. 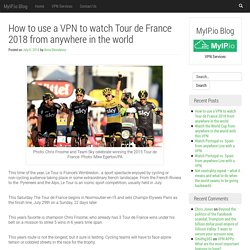 Photo: Mike Egerton/PA This time of the year, Le Tour is France’s Wimbledon , a sport spectacle enjoyed by cycling or non-cycling audience taking place in some extraordinary french landscape. From the French Riviera to the Pyrenees and the Alps, Le Tour is an iconic sport competition, usually held in July. This Saturday The Tour de France begins in Noirmoutier-en-l’Îl and sets Champs-Elysees Paris as the finish line, July 29th on a Sunday, 22 days later. Net neutrality repeal – what it means and what to do when the world seams to be going backwards. Net neutrality broadly means that all content available on the internet should be equally accessible, it’s a philosophy that puts big ideas and big money on equal grounds- preventing providers like Comcast and Verizon to block some data while prioritizing others. 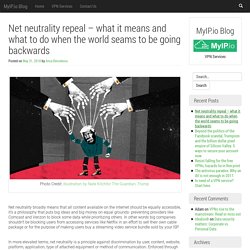 In other words big companies shouldn’t be blocking users from accessing services like Netflix in an effort to sell their own cable package or for the purpose of making users buy a streaming video service bundle sold by your ISP. In more elevated terms, net neutrality is a principle against discrimination by user, content, website, platform, application, type of attached equipment or method of communication. Beyond the politics of the Facebook scandal, Trumpism and the billion dollar pixel empire of Silicon Valley. 5 ways to secure your account now. Online data privacy has never been more present on the public agenda than in the past few months, when news about Facebook data misuse broke as the Cambridge Analytica scandal unfolded. 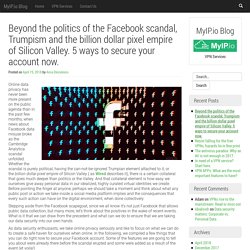 Whether the scandal is purely political, having the can-not-be-ignored Trumpian element attached to it, or the billion dollar pixel empire of Silicon Valley ( as Wired describes it), there is a certain collateral that goes much deeper than politics or the Valley. And that collateral element is how easy we ourselves give away personal data in our idealized, highly curated virtual identities we create. Before pointing the finger at anyone, perhaps we should take a moment and think about what any public post or action we take inside a social media platform implies and the consequences that every such action can have on the digital environment, when done collectively. 1.Check if your information has been shared with Cambridge Analytica 2.Manage your privacy settings 3.Manage Ad Preferences. 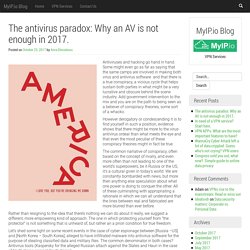 Some might even go as far as saying that the same camps are involved in making both virus and antivirus software and that there is a true conspiracy, a vicious cycle that helps sustain both parties in what might be a very lucrative and obscure behind the scene industry. Add government intervention to the mix and you are on the path to being seen as a believer of conspiracy theories, some sort of a whacko. VPN APPs: What are the most important features to have? – MyIP.io Blog. —5 actionable tips that work for all— Using an internet connection without a VPN in place has its shortcomings. 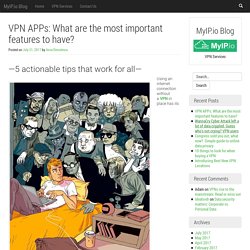 Ranging from security issues to data throttling and data selling without consent, using a VPN to overcome these threats while online has become increasingly popular nowadays. Congress sold you out, what now?  Simple guide to online data privacy   – MyIP.io Blog. An inglorious attempt to block online privacy regulations to go into effect was made last week by the US Senate and this week’s House decision. 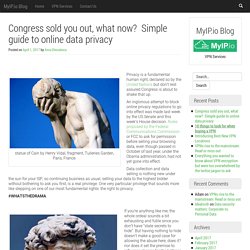 Rules proposed by the Federal Communications Commission or FCC to ask for permission before selling your browsing data, even though passed in October of last year, under the Obama administration, had not yet gone into effect. Data collection and data selling is nothing new under the sun for your ISP, so continuing business as usual, selling your data to the highest bidder without bothering to ask you first, is a real privilege. One very particular privilege that sounds more like stepping on one of our most fundamental rights: the right to privacy.

If you’re anything like me, the whole ordeal sounds a bit exhausting and futile since you don’t have “state secrets to hide”. But having nothing to hide doesn’t make a good case for allowing the abuse here, does it? But how was this even possible and who’s benefitting off of it, you wonder? 10 things to look for when buying a VPN – MyIP.io Blog. A well grounded economic notion warning about the unforeseen consequential effects of abundance describes excess as threatening to social welfare. 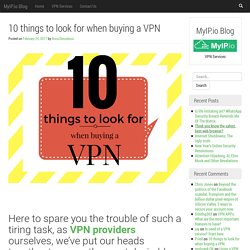 Unlike other economic theories talking about scarcity, this time, excess is the enemy in gradually rendering human labor as redundant when compared with machine automation. Now, let’s take the theory of abundance and apply it to a more trivial concern than that of pondering upon the fate of economics. Let’s think about internet and internet browsing for a bit and how the paradox of abundance can take new meaning here. A simple google search will often return dozens of results to the point that you might find yourself faced with redundant choices, every once too often. No. 1: PRICE When it comes to free versus paid, there is no debate really.

When the product is free, you are the product– A VPN service implies having servers in various countries. In other words, by searching a bargain you can be faced with two main issues: Freedom is #inevitable – MyIP.io Blog. My IP.io and efw.io team up for automation As part of a continuous and strategic process, My IP.io, the VPN platform of choice for professionals, and Elastic Firewall, the next generation firewall management tool team up for automation.

Heading towards a holistic security approach of Unified threat management (UTM) or unified security management (USM), My IP.io welcomes Elastic Firewall as a network security solution. A ROBUST VPN SERVICE,THE ONLY ROAD TO ZION – MyIP.io Blog. Photo Credit: ifc.com Being a privacy minded individual is the first thing you should consider in the ever growing digital age. The convergence of Telecom and IT has opened the door for significant B2B activity in the ICT industry and left a lot of room for data security to be improved along the way. According to Wikipedia, in the field of telecommunications, data retention or data preservation, generally refers to the storage of call detail records (CDRs) of telephony and internet traffic and transaction data (IPDRs) by governments and commercial organizations. In the case of government data retention, the data stored is usually of telephone calls made and received, emails sent and received, and websites visited.

Location data is also collected. The data retention scheme as controversial as it was back in 2015 and continues to be, made its way through the Senate, march of last year in Australia, increasing the levels of surveillance over its citizens. Photo Credit: hero.wikia.com. VPNs rise to the mainstream: Read or miss out – MyIP.io Blog. A few years ago, adopting a VPN was not the simplest of tasks for IT managers for a number of reasons which included: deployment, compatibility or interoperability issues and the expense of these systems. Things have changed. VPNs are now entering the mainstream, and many companies view them as a telecommunications necessity from both security and cost perspectives.

Originally designed to reduce the costs of connecting branch offices to the main office of a business, VPNs addressed the concern of high costs of leased lines and dedicated connections. The next matter-of-course step was to adapt VPNs to individual remote use, for internal network access and secure operations across the internet. Widely used by companies to protect corporate data, Virtual Private Network took over the personal data arena, as well, to such a degree that the use of a VPN has become an almost inalienable, “basic right”, for virtually any kind of private data exposed to the internet. CLIENT vs. SSL PROs & CONs: Using a VPN when in China: The Samurai Way – MyIP.io Blog. Photo Credit: tarantinogenre.wordpress.com Behind the Great Firewall The Chinese internet goes by very strict policy imposed by a variety of laws and administrative regulations, controlled by an authoritarian government that tries to neutralize critical online opinion.

It’s an unprecedented censorship system in all rights, that turned the Chinese internet into the largest digital boundary the world has ever seen. Dedicated VPN – Dedicated IP Address. Everything you wanted to know about VPN encryption but were too overwhelmed by the techie jargon to ask – MyIP.io Blog.