HR Consultancy Services Company based in Berkshire. We provide our HR support services throughout the UK. Get help and support from experts. 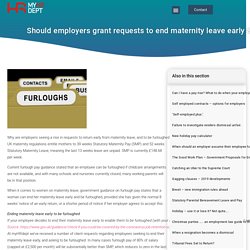 Why are employers seeing a rise in requests to return early from maternity leave, and to be furloughed? UK maternity regulations entitle mothers to 39 weeks Statutory Maternity Pay (SMP) and 52 weeks Statutory Maternity Leave, meaning the last 13 weeks leave are unpaid. SMP is currently £148.68 per week. Current furlough pay guidance stated that an employee can be furloughed if childcare arrangements are not available, and with many schools and nurseries currently closed, many working parents will be in that position. 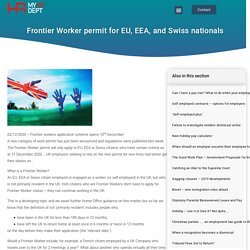 The Frontier Worker permit will only apply to EU, EEA or Swiss citizens who meet certain criteria as at 31 December 2020…..UK employers seeking to rely on the new permit for new hires had better get their skates on… What is a Frontier Worker? An EU, EEA or Swiss citizen employed or engaged as a worker (or self-employed) in the UK, but who is not primarily resident in the UK. This is a developing topic and we await further Home Office guidance on this matter, but so far we know that the definition of not ‘primarily resident’ includes people who: have been in the UK for less than 180 days in 12 months;have left the UK to return home at least once in 6 months or twice in 12 months on the day before they make their application (the ‘relevant date.’) Why is this significant? Yes. Furlough scheme, notice periods & record keeping. 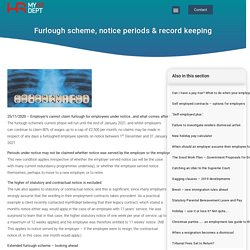 The furlough scheme’s current phase will run until the end of January 2021, and whilst employers can continue to claim 80% of wages up to a cap of £2,500 per month, no claims may be made in respect of any days a furloughed employee spends on notice between 1st December and 31 January 2021. Periods under notice may not be claimed whether notice was served by the employer or the employee This new condition applies irrespective of whether the employer served notice (as will be the case with many current redundancy programmes underway), or whether the employee served notice themselves, perhaps to move to a new employer, or to retire. 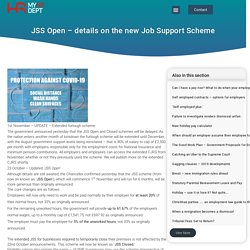 As the nation enters another month of lockdown the furlough scheme will be extended until December, with the August government support levels being reinstated – that is 80% of salary to cap of £2,500 per month with employers responsible only for the employment costs for National Insurance and minimum pension contributions. All employers and employees can access the extended CJRS from November, whether or not they previously used the scheme. We will publish more on the extended CJRS shortly. 23 October – Updated ‘JSS Open’ Although details are still awaited, the Chancellor confirmed yesterday that the JSS scheme (from now on known as ‘JSS Open’), which will commence 1st November and will run for 6 months, will be more generous than originally announced. 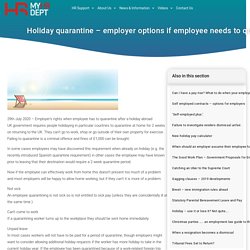 They can’t go to work, shop or go outside of their own property for exercise. Failing to quarantine is a criminal offence and fines of £1,000 can be brought. In some cases employees may have discovered this requirement when already on holiday (e.g. the recently introduced Spanish quarantine requirement) in other cases the employee may have known prior to leaving that their destination would require a 2 week quarantine period. Now if the employee can effectively work from home this doesn’t present too much of a problem and most employers will be happy to allow home working, but if they can’t it is more of a problem.

Not sick. HR Service in Berkshire.