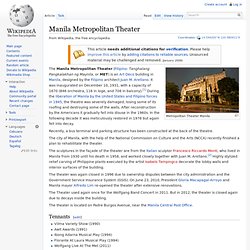 The city of Manila, with the help of the National Commission on Culture and the Arts (NCCA) recently finished a plan to rehabilitate the theater. THE MANILA METROPOLITAN THEATRE. A park-and-ride terminal goes on 24-hours a day behind the theater. 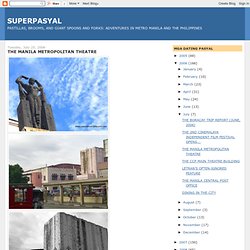 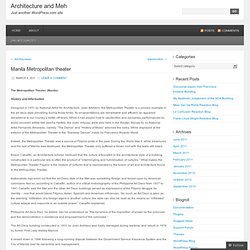 Its ornamentations are remarkable and affluent; an apparent decadence to our country’s better off times. While it had played host to vaudevilles and zarzuelas, performances by world renowed artists like Jascha Heifetz, the violin virtuoso were also held in the theater. Murals by co-National Artist Fernando Amorsolo, namely “The Dance” and “History of Music” adorned the lobby. The Metropolitan Theater – Art Deco Style. The Manila Metropolitan Theater (circa 1931) ... A Glimpse of Metropolitan Theater. Posted by Lakwatsero on Wednesday, May 19, 2010 · 22 Comments You may be passing by her everyday. 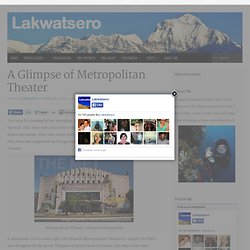 She, who was a victim and managed to survive the war. Victorian Death Photography in the United States. Keeping a likeness of famous people who have died goes back thousands of years. 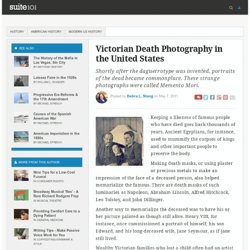 Ancient Egyptians, for instance, used to mummify the corpses of kings and other important people to preserve the body. Making death masks, or using plaster or precious metals to make an impression of the face of a deceased person, also helped memorialize the famous. There are death masks of such luminaries as Napoleon, Abraham Lincoln, Alfred Hitchcock, Leo Tolstoy, and John Dillinger.

The Best of British - The American's guide to speaking British... 99 - When you visit England, go up to the ice cream van and ask for a 99. 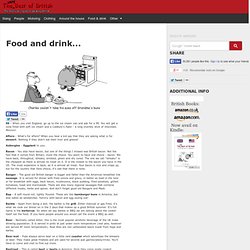 You will get a cone filled with soft ice cream and a Cadbury's flake - a long crumbly stick of chocolate. A Coffee Lover's Guide to Tea. By Lura Lee I have nothing against Starbucks. 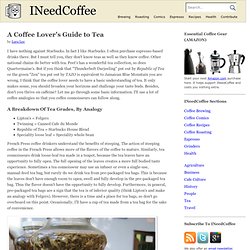 In fact I like Starbucks. I often purchase espresso-based drinks there. British food: a guide for confused Americans - National gourmet food. You might think you're prepared, food-wise, for a trip to England. 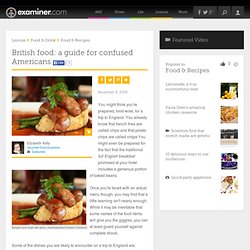 You already know that french fries are called chips and that potato chips are called crisps You might even be prepared for the fact that the traditional full English breakfast promised at your hotel includes a generous portion of baked beans. Once you're faced with an actual menu though, you may find that a little learning isn't nearly enough. While it may be inevitable that some names of the food items will give you the giggles, you can at least guard yourself against complete shock.

Some of the dishes you are likely to encounter on a trip to England are: Black pudding slices at breakfast. Bangers and Mash Though they sound like the latest set of partners in a buddy cop movie, Bangers and Mash are simply sausages and mashed potatoes, a staple offering in English pubs and casual restaurants. Black Pudding Also known as blood pudding, this sausage is named for its primary ingredient. Clotted cream and jam scone. Children in crime: Cracks in the country's juvenile justice system.

InterAksyon.comThe online news portal of TV5 MANILA, Philippines – How do you make criminals out of children? 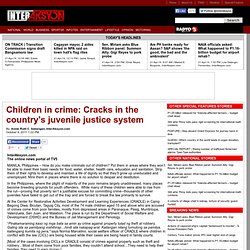 Put them in areas where they won’t be able to meet their basic needs for food, water, shelter, health care, education and sanitation. Strip them of their rights to develop and maintain a life of dignity so that they’ll grow up uneducated and unemployed. Mire them in places where there is no solution to despair and destitution. Bulatlat.com. The Problem of Youth Offenders: When Children Commit Adult Crimes Statistics show that most of the Philippines’ young offenders – “children in conflict with the law” – come from poor families. 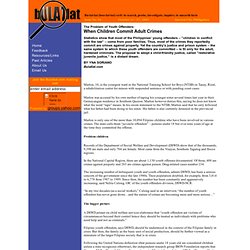 Thus, most of the crimes they reportedly commit are crimes against property. Yet the country’s justice and prison system – the same system to which these youth offenders are committed – is fit only for the adult, hardened criminals. The proposal to adopt a child-friendly justice, called “restorative juvenile justice,” is a distant dream. A Sister’s Eulogy for Steve Jobs. Your Phone. Waterproof Your iPhone (NO CASE): Liquipel CES 2012. V-Pump submersible water pump uses no electricity, has no moving parts. History of newspaper in the Philippines - Wiki on Old News, New News. Aviso al público. Free The History of Journalism in the Philippines Goes Back to the 16th Century 3 Term Paper Nascagahastian.

View Full Essay Early Years The history of journalism in the Philippines goes back to the 16th century, the same period when England and Europe were starting on the proliferation of community newspapers.