Not all of it is still on the web, but anything I can find on the web (including the Internet Archive) will go here, in anticipation of giving the whole collection to someone who's trying to put together a more updated list. 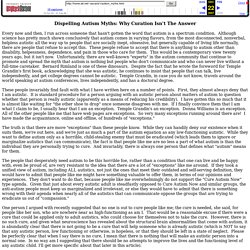 Although science has pretty much shown conclusively that autism comes in varying flavors, from the most disconnected, nonverbal, helpless autistic all the way up to people that are socially inept, obsessive, but generally capable of living life normally, there are people that refuse to accept this. These people refuse to accept that there is anything to autism other than disability, helpessness, dependence, and pain in those who care for them. This would be a contemporary view twenty years ago, but it isn't now. Unfortunately, there are well-known "experts" in the autism community that continue to promote and spread the myth that autism is nothing but people who don't communicate and who can never live without a full-time caretaker. 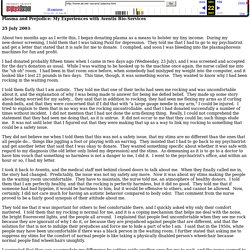 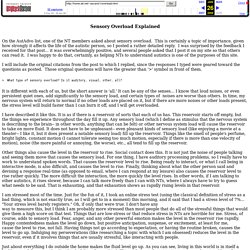 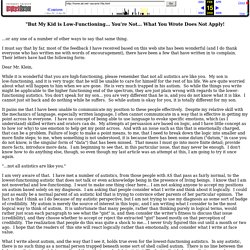 You're Not... What You Wrote Does Not Apply! Build The Autistic, Don't Tear Him Down. Build the Autistic, Don't Tear Him DownA clarification of my opinions regarding teaching autistics how to live While most of the feedback I have gotten from this site has been quite positive, there have been a few letters (okay... two of them) from people that don't seem to get what I am saying. 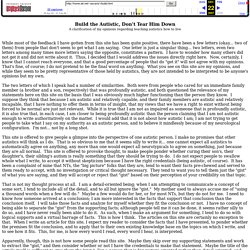 One letter is just a singular thing... two letters, even two letters among many times more letters saying the opposite, constitutes a pattern. I have to wonder how many others did not get it and did not write about it. Thus, I decided that I would address the issues directly right here. Now, certainly, I know that I cannot reach everyone, and that a good percentage of people that do "get it" will not agree with my opinions. Autism, Civil Rights, U.S. residency: Pick Any Two. Autism, Civil Rights, U.S. residency: Pick Any Two This one happened in my own backyard. 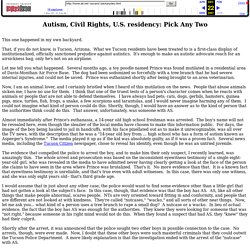 That, if you do not know, is Tucson, Arizona. What we Tucson residents have been treated to is a first-class display of institutionalized, officially sanctioned prejudice against autistics. It's enough to make an autistic advocate reach for an airsickness bag, only he's not on an airplane. The Evil in Preventing Autism. The Evil in Preventing Autism I hope the day never comes. 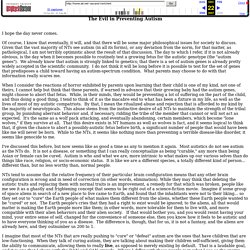 Of course, I know that eventually, it will, and that there will be some major philosophical issues for society to discuss. Given that the vast majority of NTs see autism (in all its forms), or any deviation from the norm, for that matter, as pathological, I am not terribly optimistic about the result of that discussion.

The day to which I refer, if it is not already obvious, is the day when it becomes possible to routinely test a growing fetus for the autistic genotype (the "autism genes"). Assessment. University of Pittsburgh School of Medicine Autism Research Project and Social Disabilities Clinic An NICHD Collaborative Program of Excellence in Autism 3811 O'Hara Street Bellefield Towers, Suite 430 Pittsburgh, Pennsylvania 15213 CONFIDENTIAL Diagnostic and Neuropsychological Test Results NOTE: Any interpretation of actual scores should be made in consultation with appropriate professionals. 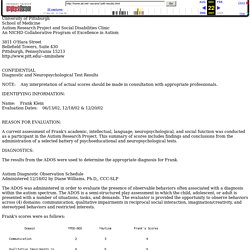 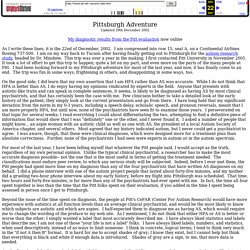 I am compressed into row 15, seat A, on a Continental Airlines Boeing 737-500. I am on my way back to Tucson after having finally getting out to Pittsburgh for the autism research study, headed by Dr. Minshew. The Story of Shane. I initially wrote this story on 16th October 2001, for the Autistic Spectrum Treehouse E-mail list. 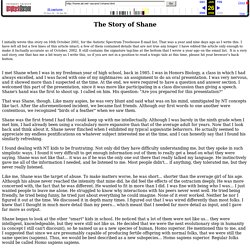 That was a year and nine days ago as I write this. I have left all but a few lines of this article intact; a few of them contained details that are not true any longer. I have edited the article only enough to make it factually accurate as of October, 2002. How Abnormal Am I? How Abnormal Am I? Every now and then,. I start to think that I am really quite close to normal; that I am only a half-step away from the NTs that usually seem so strange to me. While I can clearly remember evidence of my own weirdness in the past, sometimes I begin to doubt that it really was that different. On Autism Experts and Critical Thinking. On Autism Experts and Critical Thinking Yesterday, in an America Online chatroom, I ran across two people that claimed to be professionals in the field of autism. One of the people had commented that the people in the Bipolar chat seemed to be so intelligent, and I commented that genius seemed to be linked to bipolar disorder, schizophrenia, and autism (as Temple Grandin noted in her book Thinking in Pictures).

Immediately, one of the so-called professionals objected, stating that autistics are not intelligent, and that the ones he works with have IQs in the neighborhood of ten. On Autism Experts and Critical Thinking. Don't Cure Autism Now! Don't Cure Autism Now! "Cure Autism Now. " "Defeat Autism Now. " Those groups, and their significant following of parents of autistic kids, are no friends of mine. They might assume that everyone shares their idea that autism is a horrible thing, and that it is obvious to all that autism must be eliminated. Intro: So Your Child Was Just Diagnosed. Introduction for Parents of Autistic/AS Kids So your child was just diagnosed with autism or AS... now what?

The purpose of this web site is to give an "inside" view of autism, in its various forms, and to let people that may not otherwise know that autism (including AS) is not a horrible tragedy. I've seen the same books, articles, and web sites you probably have; the ones that portray being on the autism spectrum as being tantamount to the end of life as we know it. Understanding Neurotypicality. Understanding Neurotypicality Neurotypicality is a pervasive developmental condition, probably present since birth, in which the affected person sees the world in a very strange manner. It is a puzzle; a enigma that traps those so affected in a lifelong struggle for social status and recognition. Neurotypical individuals almost invariably show a triad of impairments, consisting of inability to think independently of the social group, marked impairment in the ability to think logically or critically, and inability to form special interests (other than in social activity).