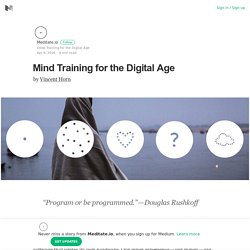 Patterns of information are being discovered in everything, from the atoms that make up the objects around us, to the code embedded within our DNA — this amazing genetic software that writes its own hardware. Our inner experience — our minds — are also programmable. They can be trained! And one of the most effective ways to train the mind is through the practice of meditation. Unfortunately, our inner experience is overrun by patterns and habits that we didn’t willingly choose. Fortunately, we aren’t the first group of people to attempt to train our minds. The Five Styles of Meditation The remainder of this mind training primer is going to introduce five distinct styles of meditation. First and foremost these five styles are practices. Concentration Meditation. 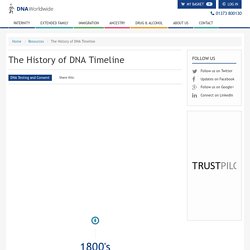 In 1831, Darwin had joined a five year scientific expedition. During his time away was influenced by Lyell's suggestion that fossils found in rocks were evidence of animals that had lived millions of years ago. The History of DNA Timeline. Breaking the Code of Silence: The Irish and Drink. By Dr. 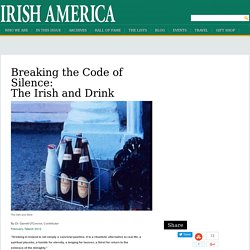 Garrett O'Connor, ContributorFebruary / March 2012 “Drinking in Ireland is not simply a convivial pastime, it is a ritualistic alternative to real life, a spiritual placebo, a fumble for eternity, a longing for heaven, a thirst for return to the embrace of the Almighty.”– John Waters. Breaking the Code of Silence: The Irish and Drink. Years after transatlantic slavery, DNA tests give clarity. ALISON STEWART, PBS NEWSHOUR WEEKEND ANCHOR: In the past decade, companies like 23andMe and ancestry.com, which offer DNA testing to help people learn more about their biological traits, have boomed. 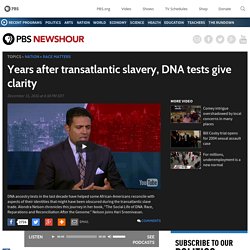 African-Americans are increasingly using these tests to explore their genealogy and answer questions about their family histories lost during the transatlantic slave trade. The Genetics of Belief // News // Notre Dame Magazine // University of Notre Dame. An itch for God seems to be universal. 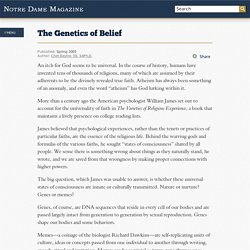 In the course of history, humans have invented tens of thousands of religions, many of which are assumed by their adherents to be the divinely revealed true faith. Atheism has always been something of an anomaly, and even the word “atheism” has God lurking within it. More than a century ago the American psychologist William James set out to account for the universality of faith in The Varieties of Religious Experience, a book that maintains a lively presence on college reading lists. Do your genes determine your entire life? Whenever you read stories about identical twins separated at birth, they tend to follow the template set by the most remarkable of them all: the “two Jims”. 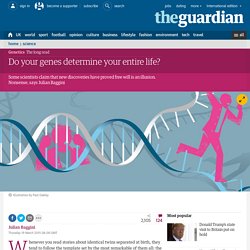 James Springer and James Lewis were separated as one-month-olds, adopted by different families and reunited at age 39. When University of Minnesota psychologist Thomas Bouchard met them in 1979, he found, as a Washington Post article put it, both had “married and divorced a woman named Linda and remarried a Betty. They shared interests in mechanical drawing and carpentry; their favourite school subject had been maths, their least favourite, spelling.

They smoked and drank the same amount and got headaches at the same time of day.” The similarities were uncanny. Other studies at the world-leading Minnesota Center for Twin and Family Research suggest that many of our traits are more than 50% inherited, including obedience to authority, vulnerability to stress, and risk-seeking. Many find this disturbing. Soon We Won't Program Computers. We'll Train Them Like Dogs. Before the invention of the computer, most experimental psychologists thought the brain was an unknowable black box. 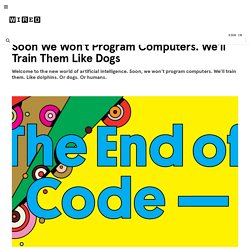 You could analyze a subject's behavior—ring bell, dog salivates—but thoughts, memories, emotions? That stuff was obscure and inscrutable, beyond the reach of science. So these behaviorists, as they called themselves, confined their work to the study of stimulus and response, feedback and reinforcement, bells and saliva. They gave up trying to understand the inner workings of the mind. They ruled their field for four decades. Annual Flooding of the Nile. Annual Flooding of the Nile The Flooding of the Nile refers to an annual flooding cycle in Egypt that dates back to ancient times. 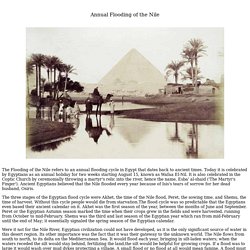 Today it is celebrated by Egyptians as an annual holiday for two weeks starting August 15, known as Wafaa El-Nil. Sirius. Sirius, aka Alpha Canis Majoris, aka Number One Big Dog Star, is the brightest star in the sky, blazing away at an apparent magnitude of -1.43. 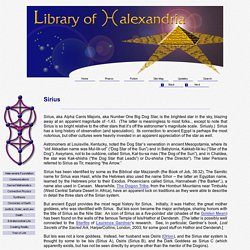 (The latter is meaningless to most folks... except to note that Sirius is so bright relative to the other stars that it’s off the astronomer’s magnitude scale. Siriusly.) Sirius has a long history of observation (and speculation). Its connection to ancient Egypt is perhaps the most notorious, but other cultures were heavily invested in an apparent appreciation of the star as well. Sopdet, Ancient Egyptian Goddess of Sirius. ByCaroline SeawrightJanuary 11, 2004 Updated: December 19, 2012 0 Comments. 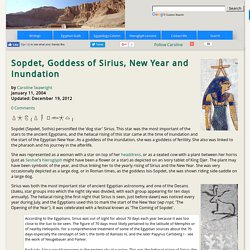 Hekate, Isis and the Dog Star Sirius: Welcome to the Dog Days! Sign Up.