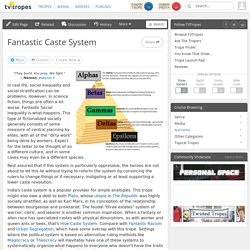 You pray. We fight. " In real life, social inequality and social stratification can be problems. However, in science fiction, things are often a lot worse. Fantastic Social Inequality is what happens. Open/close all folders Anime and Manga Though barely explored, the aliens in Niea_7 has a caste system. Comics The Kalen in Atavar have at least a combat and science caste. Fan Works What Hath Joined Together depicts an Alternate Universe Equestria with "the Order" in place, putting alicorns as royalty, unicorns as nobles and the upper-class, pegasi as soldiers and skilled craftsmen, with earth ponies as the laborers and servants. Film. The Chakana: A Universal Symbol of Wholeness.

“The sacred cross is the foundation of everything within this world. 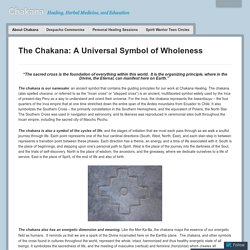 It is the organizing principle, where in the Divine, the Eternal, can manifest here on Earth.” The chakana is our namesake: an ancient symbol that contains the guiding principles for our work at Chakana Healing. The chakana (also spelled chacana, or referred to as the “Incan cross” or “stepped cross”) is an ancient, multifaceted symbol widely used by the Inca of present-day Peru as a way to understand and orient their universe. The Chakana: A Universal Symbol of Wholeness. Chakana - Cross of the Inkas. Chakana. The chakana (or Inca Cross) is a stepped cross made up of an equal-armed cross indicating the cardinal points of the compass and a superimposed square. 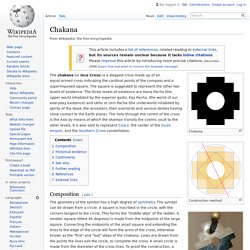 The square is suggested to represent the other two levels of existence. The three levels of existence are Hana Pacha (the upper world inhabited by the superior gods), Kay Pacha, (the world of our everyday existence) and Ukhu or Urin Pacha (the underworld inhabited by spirits of the dead, the ancestors, their overlords and various deities having close contact to the Earth plane). The hole through the centre of the cross is the Axis by means of which the shaman transits the cosmic vault to the other levels. It is also said to represent Cusco, the center of the Incan empire, and the Southern Cross constellation.

Composition[edit] The Inca Sacred Center of Machu Picchu – a Love Letter. By Rick Vecchio ✐ Peruvian Times Contributing Editor* The first time I laid eyes on Machu Picchu was 16 years ago, and even though I do not consider myself a particularly spiritual person, what I experienced in that moment was profound, and has stayed with me. 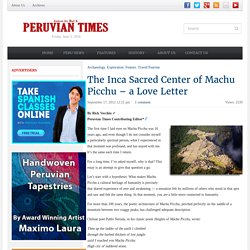 It’s the same each time I return. For a long time, I’ve asked myself, why is that? This essay is an attempt to give that question a go. Let’s start with a hypothesis: What makes Machu Picchu a cultural heritage of humanity is precisely that shared experience of awe and awakening — a sensation felt by millions of others who stood in that spot and saw and felt the same thing. For more than 100 years, the poetic architecture of Machu Picchu, perched perfectly on the saddle of a mountain between two craggy peaks, has challenged adequate description. Chilean poet Pablo Neruda, in his classic poem Heights of Machu Picchu, wrote: Galactic Door 2011 Harmonic Resonance Star Gate.

On Tuesday the 8 November in the morning we went by bus to area near Cusco to see old temple of the Moon and we visited another house where shaman Santiago made special ceremony for the group outside. 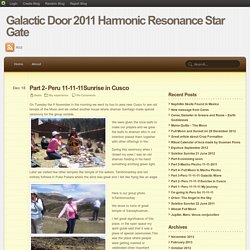 We were given the coca leafs to make our prayers and we gave the leafs to shaman who in our intention placed them together with other offerings in fire. During this ceremony when I closed my eyes I saw an old shaman holding in his hand something emitting green light. Later we visited few other temples like temple of the waters, Tambomachay and old military fortress in Puka Pukara where the wind was great and I felt like flying like an eagle. Here is our group photo inTambomachay We drove to ruins of great temple of Sacsayhuaman, I felt great significance of this place; in the open space my spirit guide said that it was a place of special ceremonies.This was the place where people were getting married or celebrated other important dates. Ancient Aliens and Unexplained Artifacts. The theory that aliens visited earth in ancient times is not new – in fact some of man’s earliest records of history mention “star beings” and “sky visitors”. 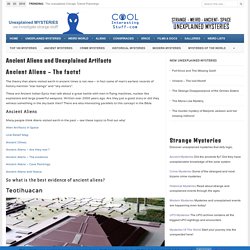 These are Ancient Indian Epics that talk about a great battle with men in flying machines, nuclear like explosions and large powerful weapons. Written over 2000 years ago. Are they just a good story or did they witness something in the sky back then? There are also interesting parallels to this concept in the Bible. Ancient Aliens Many people think Aliens visited earth in the past – see these topics to find out why! Alien Artifacts in Space Ural Relief Map Ancient Olmec Ancient Aliens – Are they real ? Three Magic places. I call a place magical if its geography creates vibrations that resonate in one’s deepest self. 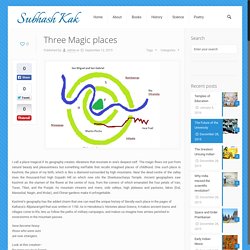 The magic flows not just from natural beauty and pleasantness but something ineffable that recalls imagined places of childhood. One such place is Kashmir, the place of my birth, which is like a diamond surrounded by high mountains. Near the dead centre of the valley rises the thousand-foot high Gopadri Hill on which now sits the Shankaracharya Temple. Ancient geographers saw Kashmir as the stamen of the flower at the centre of Asia, from the corners of which emanated the four petals of Iran, Turan, Tibet, and the Punjab. 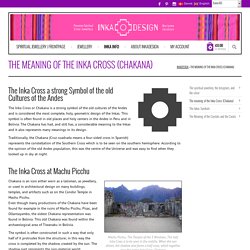 This symbol is often found in old places and holy centers in the Andes in Peru and in Bolivia. The Chakana has had, and still has, a considerable meaning to the Inkas and it also represents many meanings in its design. The Random Musings of a Gypsy Archaeologist... Hola Peru Fans! 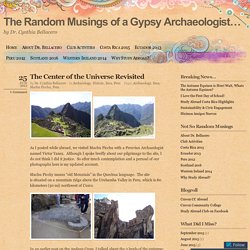 Today I would like to ponder Peruvian wakas. As I mentioned last time, a waka is a holy place. According to Andean cosmology, wakas are arranged along imaginary lines that radiate out from the temple of the sun in Cusco. Remember to the Inca, Cusco was the center of the universe. These holy places were envisioned as connected to it. The Random Musings of a Gypsy Archaeologist... INCA Environmental Synergy Limited. INCA Environmental Synergy Limited (INCA ESL) epitomises a team of accomplished professionals who strive to offer clients a faultless and hassle-free experience of how the best facilitator management and associated integrated service provider do business. 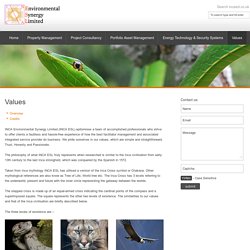 We pride ourselves in our values, which are simple and straightforward. Trust, Honesty and Passionate. INCA Environmental Synergy Limited. A Brief History Of The Incas Book: Chakana: Ancient Inca Cross May Be 15,000 Years Old. The chakana: The meaning of the Inca Cross. Related Articles Through the looking glass of Ayacucho's past One of the most enduring symbols of the Inca civilization is the chakana, also called the Cruz Andina or Andean Cross. At the heart of the symbol is a circular hole which represents the city of Cusco, the capital of the Inca Empire and navel of the Incan world. Surrounding this circle are four corners, ridged with three steps each. Each of these corners is believed to have meaning, although there is disagreement as to what those meanings are. The Eagle and the Condor—A Prophecy for Our Time - Pachamama Alliance.

Story of Creation Written in Night Sky (Feb 4, 2012) And I also know what the two multidimensional beings meant when they told me three years ago that one of my planetary missions in this lifetime is to receive and tell the story of creation so as to enlighten people about it (see Meeting Grandma Chandra, Feb 2009).Archangel Michael Shows Up through Mystic Medicine Card, Offering Protection during Transformation (2/02/2012)Right after I had finished the above Epilogue, I drew my Mystic Medicine card guidance for the day. It was Protection (see right).

I do believe that this is the first time EVER (!) That I drew this card. Lila (Hinduism) Sa eṣa prakṛtiḿ sūkṣmāḿ daivīḿ guṇamayīḿ vibhuḥ yadṛcchayaivopagatām abhyapadyata līlayā"As His pastimes, that Supreme Personality of Godhead, the greatest of the great, accepted the subtle material energy, which is invested with three material modes of nature.

" Brahman is full of all perfections. No Mortal Man Hath Yet to Unveil Me – Gnostic Symbolism. Roman bust of Isis-Sothis-Demeter Like so many others which dotted the face of the ancient world, the Eleusian Mystery Schools used the sacred language of symbolism, a vehicle which lends capacity for conveying depth and emotion, beyond that of any script. Plus, symbolism is a language best experienced. In the jargon of Jungian archetypes, many rudimentary symbols speak from a deep archaic, subconscious levels. To Jungian’s: this is the collective subconscious, to Orientals: the eternal Akashic record. Just scrutinize the following few images and you’ll quickly acquiesce. Mythanthrope: Restoring our Cultural Memory; Dedicated to Isis. Mythology Mythology is a form of cultural memory condensed into stories.