Faiths of Man: A Cyclopædia of Religions - James George Roche Forlong. Durga - Narrative Art of a Warrior Goddess. Hindu Deities: Goddess Durga. Goddess Durga represents the power of the Supreme Being that preserves moral order and righteousness in the creation. 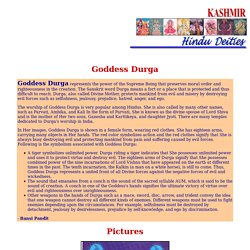 The Sanskrit word Durga means a fort or a place that is protected and thus difficult to reach. Durga, also called Divine Mother, protects mankind from evil and misery by destroying evil forces such as selfishness, jealousy, prejudice, hatred, anger, and ego. Falling Into Love. Everything comes from Zero and goes back to Zero. 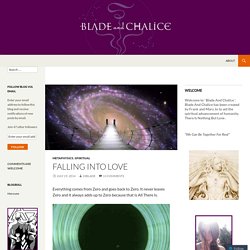 It never leaves Zero and it always adds up to Zero because that is All There Is. “Nothing real can be threatened Nothing unreal exists Herein lies the peace of God” Falling Into Love. Untitled Document. After chasing the poem through several sites, I found this: “The following is excerpted exactly from The Goddess Oracle by Amy Sophia Marashinsky and the illustrations are by Hrana Janto. 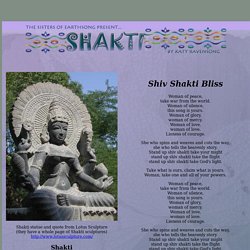 For more information on their work, please visit the following websites: Amy Sophia Marashinsky: Hrana Janto: For men to fully understand women and for women to realize their nature and be it, both have to come to understanding of the Shakti, the Goddess, or the Kundalini energy, the feminine of the Universe. The nature of this phenomena is very complex, but if you get friendly with her it will tell you her secrets. . ( author: Anya Deva ) Mother-Goddess1Shakti Photograph © Medha Malik Kudaisya--may be used without prior permission for any educational or scholarly purpose Shakti, Shakti, still you rise!

© Katy Ravensong – October 2011. Shiva Shakti January 2015. THE DIVINE COUPLE SHIVA-SHAKTI. In the Tantric cosmology, the whole universe is perceived as being created, penetrated and sustained by two fundamental forces, which are permanently in a perfect, indestructible union. 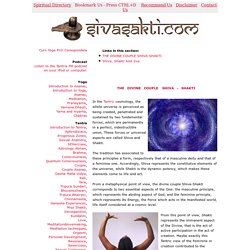 These forces or universal aspects are called Shiva and Shakti. The tradition has associated to these principles a form, respectively that of a masculine deity and that of a feminine one. Divine Mother Durga. The story of how Divine Mother Durga revealed herself to human consciousness and why she is worshipped is quite interesting. 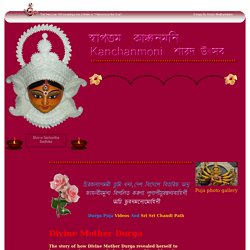 This month being extremely auspicious, when Durga worship is performed all over India and in numerous countries abroad, let's meditate on the Divine Mother for a few moments. Introduction Sri Ramakrishna has declared time and again: He who is "Brahmna" (Eternal Existence) is also "Shakti" (Power of God). Lesson: Durga's Victory (Women in World History Curriculum) Durga. Durga - Narrative Art of a Warrior Goddess. One of the most invoked forms of the Great Goddess is her manifestation as the youthful, multi-armed deity who successfully battles the mighty buffalo demon that symbolizes among other things, the elemental powers of brutish ignorance. 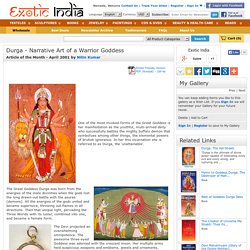 In her this incarnation she is referred to as Durga, the 'unattainable'. The Great Goddess Durga was born from the energies of the male divinities when the gods lost the long drawn-out battle with the asuras (demons). All the energies of the gods united and became supernova, throwing out flames in all directions. Then that unique light, pervading the Three Worlds with its luster, combined into one, and became a female form.

The Devi projected an overwhelming omnipotence. Durga: The Mother Goddess & Her Symbolism. Goddess Durga is the mother of the universe and believed to be the power behind the work of creation, preservation, and destruction of the world. 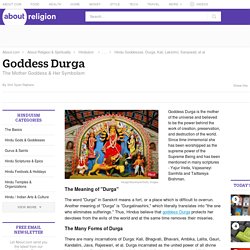 Since time immemorial she has been worshipped as the supreme power of the Supreme Being and has been mentioned in many scriptures - Yajur Veda, Vajasaneyi Samhita and Taittareya Brahman. The Meaning of "Durga" The word "Durga" in Sanskrit means a fort, or a place which is difficult to overrun. Another meaning of "Durga" is "Durgatinashini," which literally translates into "the one who eliminates sufferings. " Arkitektur, kunst og musikk. ArkitekturBuddhismens arkitektur er viktig i religionen. 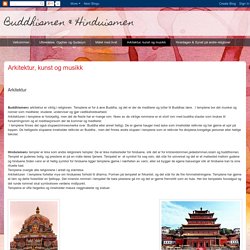