Muslim Charity in UK serve the poor and impoverished as a demonstration of God’s unconditional love for all people regardless of race, religion or gender. 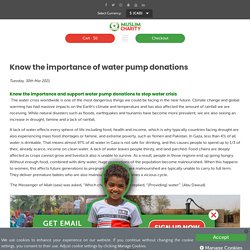 Climate change and global warming has had massive impacts on the Earth’s climate and temperature and has also affected the amount of rainfall we are receiving. While natural disasters such as floods, earthquakes and tsunamis have become more prevalent, we are also seeing an increase in drought, famine and a lack of rainfall. A lack of water effects every sphere of life including food, health and income, which is why typically countries facing drought are also experiencing mass food shortages or famine, and extreme poverty, such as Yemen and Pakistan. 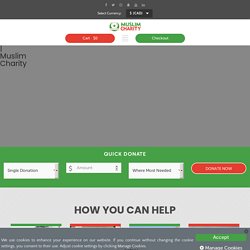 This means you will receive countless rewards for a single donation, even after you have passed away. You can even give on behalf of a deceased loved one, as they will continue to gain reward from it for as long as people benefit from it. Our tailored Sadaqah Jariyah projects benefit communities for generations to come facilitating long-lasting, positive change.

With Muslim Charity, your Sadaqah Jariyah could provide people with clean water for years to come, keeping them healthy, safe and happy. You can do this by building a handpump. You could build a school and create a space for children to learn and grow, shaping the world of tomorrow. As Sadaqah Jariyah, you could vow to care for orphans, and give them everything a parent would so that they achieve their full potential. Who is eligible to pay Sadaqah? Muslim Charity Intervention. This Ramadan, while you choose to fast out of love for Allah, countless people across the globe have no choice but to go without food. 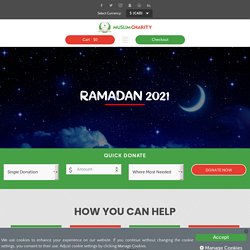 Millions will have no food for iftar. The Coronavirus pandemic has left millions more without enough food to eat, and without food, they struggle to stay safe and healthy. There are currently over 795million people in the world who do not have enough food to eat. 1 in 12 people are clinically malnourished, which means they not only lack enough food, but do not receive enough of the right vitamins, minerals and calories. 99% of the world’s malnourished people live in developing countries including Yemen, Pakistan, Bangladesh and Palestine.

Malnutrition can lead to stunted growth, sight problems, diabetes, heart disease and other serious issues. People in refugee camps in places like Syria, Burma, Yemen and Palestine, and those living in poverty in rural areas of Pakistan and Bangladesh, lack access to basic essentials including food, water and healthcare. Zakah Donation in UK. Zakah donation - The Best Way to Purify Your Soul and Wealth in Islam. Thursday, 11th Feb 2021 There are five core pillars which form the basis of Islam – declaration of faith (shahadah), five daily prayers (salah), annual obligatory charity of 2.5% of wealth (zakat), fasting during the holy month of Ramadan and the lifetime pilgrimage of Hajj. 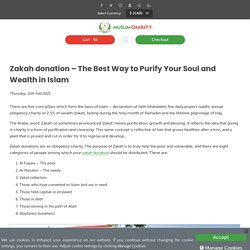 The Arabic word ‘Zakah’ or sometimes pronounced ‘Zakat’, means purification, growth and blessing. It reflects the idea that giving in charity is a form of purification and cleansing. This same concept is reflective of hair that grows healthier after a trim, and a plant that is pruned and cut in order for it to regrow and develop. Zakah donations are an obligatory charity. Al Fuqara – The poorAl-Masakin – The needyZakat collectorsThose who have converted to Islam and are in needThose held captive or enslavedThose in debtThose striving in the path of AllahWayfarers (travellers) Your Zakah donation truly has the power to save lives, transform communities and lift people out of poverty.