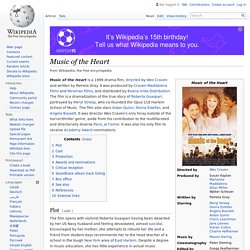 It was produced by Craven-Maddalena Films and Miramax Films, and distributed by Buena Vista Distribution. The film is a dramatization of the true story of Roberta Guaspari, portrayed by Meryl Streep, who co-founded the Opus 118 Harlem School of Music. The film also stars Aidan Quinn, Gloria Estefan, and Angela Bassett.

It was director Wes Craven's only foray outside of the horror/thriller genre, aside from his contribution to the multifaceted and directorially diverse Paris, je t'aime. It was also his only film to receive Academy Award nominations. Plot[edit] The film opens with violinist Roberta Guaspari having been deserted by her US Navy husband and feeling devastated, almost suicidal. Ten years later, the string program is still running successfully at three schools, but suddenly the school budget is cut and Roberta is out of a job. 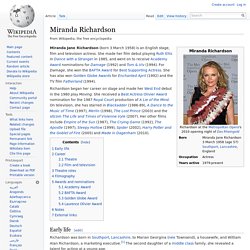 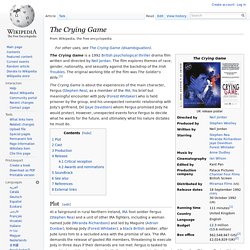 The film explores themes of race, gender, nationality, and sexuality against the backdrop of the Irish Troubles. The original working title of the film was The Soldier's Wife.[3] Damage (1992 film) Dr. 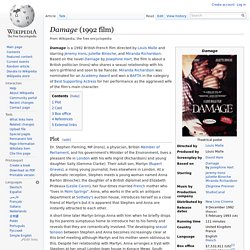 Anna, who works in the arts an antiques department at Sotheby's auction house, introduces herself as a close friend of Martyn's but it is apparent that Stephen and Anna are instantly attracted to each other. A short time later Martyn brings Anna with him when he briefly drops by his parents sumptuous home to introduce her to his family and reveals that they are romantically involved. Jill Esmond. Jill Esmond (26 January 1908 – 28 July 1990) was an English actress and first wife of Laurence Olivier. 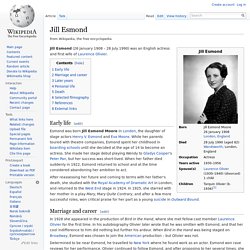 Early life[edit] Esmond was born Jill Esmond Moore in London, the daughter of stage actors Henry V. Esmond and Eva Moore. While her parents toured with theatre companies, Esmond spent her childhood in boarding schools until she decided at the age of 14 to become an actress. She made her stage debut playing Wendy to Gladys Cooper's Peter Pan, but her success was short-lived. Jack Klugman. Jack Klugman (April 27, 1922 – December 24, 2012) was an American stage, film and television actor.[1] A longtime smoker, Klugman was diagnosed with throat cancer in 1974. 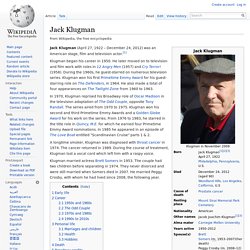 The cancer returned in 1989. During the course of treatment, Klugman lost a vocal cord which left him with a raspy voice. Klugman married actress Brett Somers in 1953. Ralph Richardson. Sir Ralph David Richardson (19 December 1902 – 10 October 1983) was an English actor who, along with his contemporaries John Gielgud and Laurence Olivier, dominated the British stage of the mid-20th century. 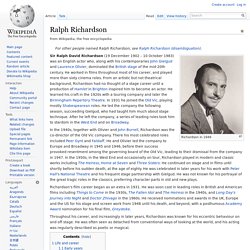 He worked in films throughout most of his career, and played more than sixty cinema roles. From an artistic but not theatrical background, Richardson had no thought of a stage career until a production of Hamlet in Brighton inspired him to become an actor. He learned his craft in the 1920s with a touring company and later the Birmingham Repertory Theatre.

In 1931 he joined the Old Vic, playing mostly Shakespearean roles. He led the company the following season, succeeding Gielgud, who had taught him much about stage technique. Alec Guinness. John Gielgud. Sir Arthur John Gielgud, OM, CH (/ˈɡiːlɡʊd/; 14 April 1904 – 21 May 2000), was an English actor and theatre director whose career spanned eight decades. 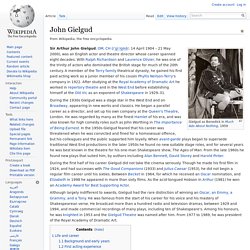 With Ralph Richardson and Laurence Olivier, he was one of the trinity of actors who dominated the British stage for much of the 20th century. A member of the Terry family theatrical dynasty, he gained his first paid acting work as a junior member of his cousin Phyllis Neilson-Terry's company in 1922. After studying at the Royal Academy of Dramatic Art he worked in repertory theatre and in the West End before establishing himself at the Old Vic as an exponent of Shakespeare in 1929–31. During the 1930s Gielgud was a stage star in the West End and on Broadway, appearing in new works and classics.

My Old Lady (film) My Old Lady is a British–French–American comedy-drama film written and directed by Israel Horovitz in his feature directorial debut.[3] He had previously directed 3 Weeks After Paradise, a 51-minute testimonial from 2002 about his family's experiences following the September 11, 2001, terrorist attacks on New York's World Trade Center. 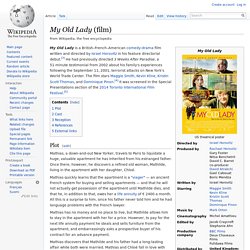 The film stars Maggie Smith, Kevin Kline, Kristin Scott Thomas, and Dominique Pinon.[4] It was screened in the Special Presentations section of the 2014 Toronto International Film Festival.[5] Four Weddings and a Funeral. Plot[edit] The film follows the adventures of a group of friends through the eyes of Charles (Hugh Grant), a good-natured but socially awkward Briton, who is smitten with Carrie (Andie MacDowell), an American whom Charles repeatedly meets at four weddings and at a funeral. 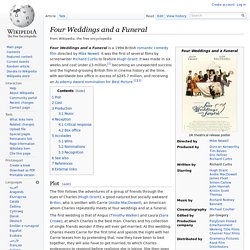 The second wedding is that of Bernard (David Haig) and Lydia (Sophie Thompson), a couple who got together at the previous wedding. Charles is happy to discover that Carrie is attending the wedding, until she introduces him to her fiancé, Sir Hamish Banks (Corin Redgrave), a wealthy politician from Scotland. The Maltese Falcon (1941 film) Directed by John Huston, the film stars Humphrey Bogart as private investigator Sam Spade and Mary Astor as his femme fatale client. Gladys George, Peter Lorre, and Sydney Greenstreet co-star, with Greenstreet appearing in his film debut. The Maltese Falcon was Huston's directorial debut and was nominated for three Academy Awards. Ken Loach.

Kenneth "Ken" Loach (born 17 June 1936) is an English film and television director. Life and career[edit] Loach was born in Nuneaton, Warwickshire, the son of Vivien (née Hamlin) and John Loach.[1] Matt Damon. Damon has also performed voice-over work and established several production companies. Damon has been actively involved in charitable work, including the ONE Campaign, H2O Africa Foundation, Feeding America, and Water.org. With his wife, Luciana Bozán Barroso, Damon has three daughters and a stepdaughter from Barroso's prior marriage. Dervla Kirwan. The Godfather. Plot[edit] Shortly before Christmas 1945, drug baron Virgil "The Turk" Sollozzo, backed by the Corleones' rivals, the Tattaglias, asks Vito for investment in the emerging drug trade and protection through his political connections.

Vito disapproves of drug dealers, so he sends his enforcer, Luca Brasi, to spy on them. The family then receives two fish wrapped in Brasi's vest, imparting that he "sleeps with the fishes". Ashton Kutcher. Demi Moore. John Osborne. Tony Randall. Tinker Tailor Soldier Spy (TV miniseries) The Happiest Days of Your Life. Cathy Come Home. Cathy Come Home is a 1966 BBC television play by Jeremy Sandford, produced by Tony Garnett and directed by Ken Loach, about homelessness. A 1998 Radio Times readers' poll voted it the "best single television drama" and a 2000 industry poll rated it as the second best British television programme ever made.[2][3] Filmed in a gritty, realistic drama documentary style, it was first broadcast on 16 November 1966 on BBC1. The play was shown in the BBC's The Wednesday Play anthology strand, which was well known for tackling social issues. Plot summary[edit] Reception[edit] Michael Medwin. Mary Ure.

List of Carry On films cast members. Whistle Down the Wind (film) Carry On (franchise) The Carry On series contains the largest number of films of any British series, and next to the James Bond films, it is the second longest continually running UK film series (with a fourteen-year break between 1978 and 1992). From 1958 to 1966 Anglo Amalgamated Film Distributors Ltd produced 12 films, with Rank Organisation making the remaining 19 between 1967 and 1992. All the films were made at Pinewood Studios. Pirates of the Caribbean (film series) 2014 Primetime Emmy Award Nominations. Donald Sutherland. Bill Kerr. William Henry Kerr (10 June 1922 – 28 August 2014), credited as Bill Kerr was a South African-born Australian actor, comedian and vaudevillian. Joyce Grenfell. Goodfellas. Dallas (1978 TV series) Anna Karina.