You’re looking for music lessons for yourself or a child? Here you find an expert piano, guitar, violin, voice, cello or drum instructor. Now you join us.

Know the Benefits of Listening Music for Life. Learn Why Music is Important for Life. For what reason Does Music Affect Our Emotions? 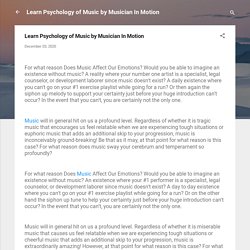 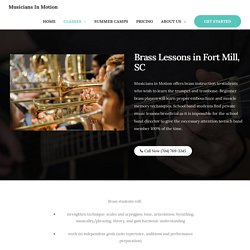 When I was 5, my mother chose the piano for me. As I grew older, I began to understand that there were no shortcuts to obtaining the skills required for self-expression. Ukulele Lessons in South Charlotte and Waxhaw, NC and Fort Mill, Sc. Christy has been giving private music instruction for 15 years and has been with Musicians In Motion for the last 7. 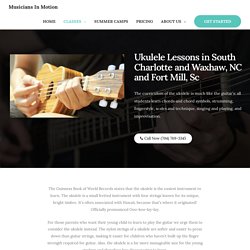 She teaches voice, piano, ukulele, alto saxophone, and flute. Growing up, she began singing and taking piano lessons at a young age. She used her knowledge of piano to learn many instruments and explore many avenues of music, including vocal ensembles, show choir, concert band, marching band, jazz band, orchestra, and church worship teams. After high school, she pursued Christian ministry training. 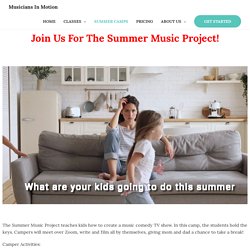 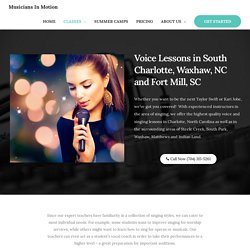 Garrett received his bachelors from North Carolina A&T State University. Best Violin Lessons in Charlotte. Music is something that affects each an every one of us, and even if we don’t all become professional musicians, their is a hightened level of appreciation for music in general after having played an instrument. 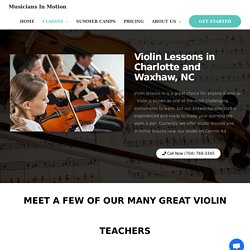 I teach the suzuki method which emphasizes ear training (something many musicians lack) along with the normal theory that must be taught. Imagine being able to play by ear or by music! It’s simple yet effective in bringing years of musical enjoyment! You never know….you might become the next Itzhak Perlman! I also believe firmly in training my students how to practice effectively in order to progress as quickly as possible.

Top 5 Guitar Lessons Near me. Thomas S. has been playing the guitar for over 25 years. 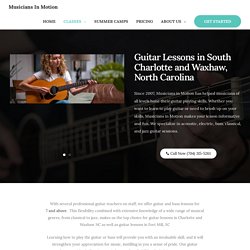 He has taught numerous styles using different techniques and approaches for over 18 years. His writing/playing styles span from Blues, Rock, Jazz, Folk, Pop, R&B, Classical to Latin. This artist is a self taught guitarist, composer and writer, who mainly works in Charlotte, NC. Thomas’s performance and compositional belt notches were derived from his appearances and performances playing with bands in NYC like The Albatross and Velvet Soul from 2000-2002. He has also played with soulful folkish bands like Eddie Kane and Melodic from 2010-2011. Thomas’s passion for the arts has proven to be a worthwhile adversary to his list of students over the years. Piano Lesson South Charlotte Waxhaw. 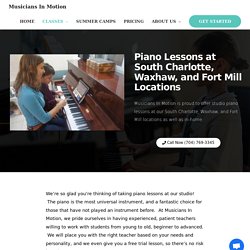 Garrett received his bachelors from North Carolina A&T State University. His major was in music education with a minor in music performance. His concentration was in voice and piano. Rodney lived a life as a testimony of faith, perseverance and determination. Rodney was given away at birth by his mother, and had to face many challenges in his life. Rodney’s compassion for music came from his trials that he faces growing up as an adopted child, and because of this he is very passionate about his music.

Where he also began his musical foundation and background, under the teachings of Pastor Nancy Wilson, Kim Carree-Maxwell, Brenda Williams, and Joseph Jackson, just to name a few. Throughout Rodney’s musical career, he has been blesses to share the gospel stage with many gospel artist, one of many who is Candice Glover who was on Sunday’s Best. Rodney also serves as the Rock Hill District Minister of Music of the A.M.E. Beginner Music Classes in Charlotte. Math and Music unite the two hemispheres of the brain – a powerful force for learning. 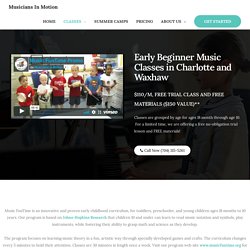 Did you ever consider the skills your child uses when he/she sings a song such as “This Old Man”? He/she is matching and comparing (through pitch, volume and rhythm), patterning and sequencing (through melody, rhythm and lyrics), counting numbers and adding. Add dramatic hand movements or clapping to the beat and you have created an entire package of learning rolled into one song. In recent years, there has been consider- able amount of research on the effect of music on brain development and thinking.

Neurological research has found that the higher the brain functions of abstract reasoning as well as spatial and temporal conceptualization are enhanced by music activities. Music is considered a right brain activity, while Math is a left brain activity. Piano lessons near me.