As new-age design and innovation happens to be a prerequisite for modern-day technology, a 21-year-old Mumbai-based boy has landed his dream internship at CRED which happens to be a members-only credit card management and bill payments platform.

Get full news at: 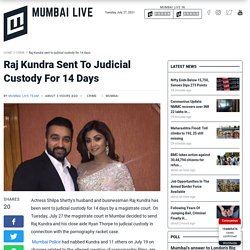 On Tuesday, July 27 the magistrate court in Mumbai decided to send Raj Kundra and his close aide Ryan Thorpe to judicial custody in connection with the pornography racket case. Mumbai Police had nabbed Kundra and 11 others on July 19 on charges related to the alleged creation of pornographic films. He had moved the Bombay High Court on July 23 challenging police custody. As per reports, the matter is kept for hearing tomorrow again. As per a Live Law report, this is what Raj Kundra’s bail plea specifically says: “Notice in the matter where FIR is registered on 05.02.2021, the Charge sheet is filed on 03.04.2021 and they could have easily served notice and could have allowed the Petitioner to appear and give his statement and if the Petitioner failed to do so the consequences would had followed. 30 Industry Leaders To Form Task Force To Tackle COVID. According to reports, on Monday, the Maharashtra Government curated a task force of 30 members in order to facilitate the seamless working of the industrial sector, whilst juggling the COVID-19 responsibilities. 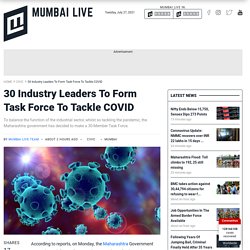 Set to be headed by Subhash Desai, Industries Ministers it will also include revered corporate tycoons. Additionally, Chief Secretary Sitaram Kunte will be the force’s Vice Chairman. The task force brings under its spectrum, officers from the industry department, corporate representatives from the government as well as the private sector which include the services and manufacturing sectors. NMMC special team leaves for Mahad to conduct rescue operations.

Due to the severity of the floods across Maharashtra, Chief Minister Uddhav Thackeray has appealed to all civic bodies across the state to take adequate measures to conduct relief operations. 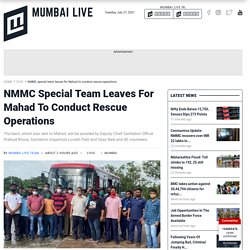 In view of the situation, Navi Mumbai Municipal Corporation (NMMC), as per the instructions of Municipal Commissioner Abhijeet Bangar, has provided for a relief team of 43 people who immediately left for Mahad amidst the flooding situation. In the year 2018 as well, during the floods, the relief team of NNMC had worked in the Kolhapur area and it was noticed at various levels. Meanwhile, the team, which was sent to Mahad, will be assisted by Deputy Chief Sanitation Officer Pralhad Khose, Sanitation Inspectors Lovesh Patil and Vijay Naik and 40 volunteers. On the other hand, the civic body has increased coronavirus testing amid the fear of third and a rise in the cases of delta variant cases across the state.

Following Years Of Jumping Bail, Criminal Finally Held After 35 Years. As reported by the PTI, in 1986, a criminal wanted in a murder case had jumped bail. 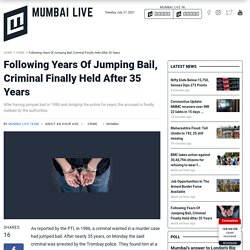 After nearly 35 years, on Monday the said criminal was arrested by the Trombay police. They found him at a slum in south Mumbai, claim reports. The criminal, Prakash Murarilal Ratan also known as Pakya earned a livelihood by selling garlands. Will BJP-MNS come together for upcoming BMC polls? As the upcoming Brihanmumbai Municipal Corporation (BMC) elections are coming nearer, all the political parties are gearing up to fight the polls. 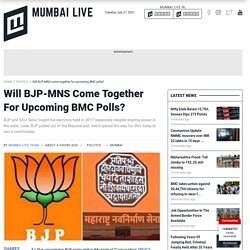 However, a recent meeting between the state Bharatiya Janata Party (BJP) chief Chandrakant Patil and Maharashtra Navnirman Sena founder Raj Thackeray at Nashik has sparked speculation about both joining hands for the BMC elections to be held in 2022. In addition, Former finance minister and veteran BJP leader Sudhir Mungantiwar, on Monday, said he had received a call from the MNS chief and he will meet him soon. In an interview with a news channel, Mungantiwar said that if BJP and MNS form an alliance, what is wrong with it? If like-minded parties are coming together, what is wrong with that? In the future, anyone can leave any party and/or come together. Maharashtra: NDRF deployed to Chiplun as thousands citizens stranded in flood-like situation; 3 died in Ratnagiri. Heavy rains across Maharashtra triggered a flood-like situation in Chiplun town of Ratnagiri district. 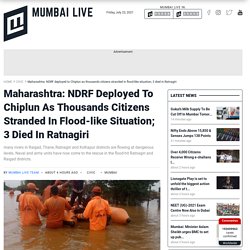 Due to this, hundreds of people were stranded as water flowing through the Vashishti river gushed into nearby areas on Thursday, July 22. According to reports, Chiplun in Ratnagiri is the worst hit with the entire city being inundated, leaving more than 5,000 people stranded in their houses as roads are underwater. Moreover, several parts of the district recorded water levels of over 10 feet. Also Read: Landslide in Mahad damages over 30 houses; more than 70 people missing Meanwhile, water started entering the first floor of houses in many places, forcing people to move to their rooftops. Mumbai: Minister Aslam Sheikh urges BMC to set up public washrooms for transgenders. In a first of its kind, Mumbai Guardian Minister Aslam Shaikh said that he has written to the Brihanmumbai Municipal Corporation (BMC) urging to set up separate public washrooms for transgender people in the city. 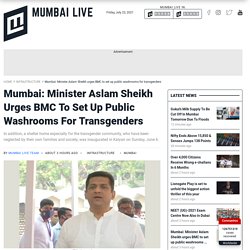 The minister further proposed that the washrooms be set up in areas like Churchgate and the Chhatrapati Shivaji Maharaj Terminus (CSMT). This comes as a welcome move for the transgender community in the city. NEET (UG)-2021 Exam Centre Now Also in Dubai. On Thursday, according to reports, the Ministry of Education has pronounced to add, a centre in Dubai for NEET, the medical entrance exam, this year. 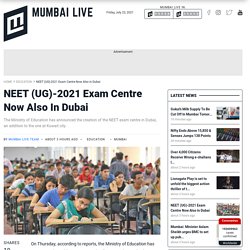 NEET ( UG)-2021 exam centre has been created in Dubai in addition to the one already at Kuwait city @DG_NTA @PMOIndia @narendramodi @dpradhanbjp @OfficeDp @PIB_India @PIBHRD @mygovindia— Ministry of Education (@EduMinOfIndia) July 22, 2021 Previously this month, the ministry also announced on how, the said exam will be conducted in Kuwait for the first time to assist the Indian student community there. Lionsgate Play is set to unfold the biggest action thriller of this year. The premium streaming platform, Lionsgate Play is taking the app by storm with critically acclaimed titles like Normal People, The Girlfriend Experience, The Gentlemen, Chaos Walking and many more. 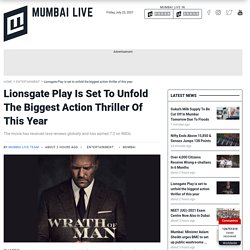 With an announcement of yet another exciting, direct-to-digital premiere of the most awaited American action thriller, Wrath of Man on 23rd July 2021. Directed by Guy Ritchie, the riveting plot of the movie is based on the 2004 French film Cash Truck by Nicolas Boukhrief. Over 4,000 Citizens Receive Wrong e-challans In 6 Months. Six months into this year, 40,000 conflicts on the traffic e-challans were brought to light by the citizens. 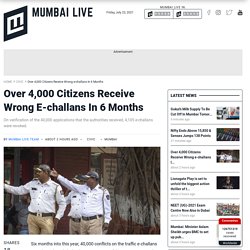 Out of these, approximately, 10% were genuine. On examining these claims, reports state that it was understood that over 200 vehicles are using fake number plates. Owing to this, the concerned department has lodged complaints on 17 individuals over these false registration numbers. If motorists are found to be disregarding traffic rules, through an automated process, e-challans are sent to them. Mumbai University results to have an impact on students pursuing postgraduate courses. Ajit Pawar promotes the use of electric vehicles in Maharashtra. Maharashtra's Deputy Chief Minister Ajit Pawar, on Wednesday, July 21, 2021, informed that the state government will give priority to promoting the use of electric vehicles.

This decision was taken to prevent the growing pollution and possible dangers across all districts in the state. The statement was made by Minister Pawar at the inauguration of the Fitwel Mobility's distribution service for the states of Maharashtra, Karnataka and Goa at Pimpri-Chinchwad. Present at the occasion were Rajesh Patil, Commissioner, Pimpri-Chinchwad Municipal Corporation, Fitwel Mobility's Ravindra Kangralkar, Chaitanya Shirole, A. Analyses On The Diversion Of Vihar Lake’s Surplus Water To Be Concluded Next Year By The BMC. The Brihanmumbai Municipal Corporation (BMC) will be completing their study on rerouting extra water during monsoon from Vihar Lake to Bhandup Water Treatment plan or Airoli Creek, next year. The water level in the Mithi River rises during the rainy season because Vihar Lake releases its excess water into it.

The civic authority, last year in November had chosen a consultant to examine the viability of the said project. The consultant is said to be studying not just the rain patterns, but the amount of water that needs to be diverted and appropriate locations to discharge the water. According to reports, a senior official for the Storm Water Drain Department mentioned that the study is also factoring in climate change since high-intensity rainfall in a short span is becoming a regular phenomenon. Coronavirus Vaccination: BMC to resume inoculation at Civic, Govt-run Centres from tomorrow. The Brihanmumbai Municipal Corporation (BMC) announced that it will resume the COVID-19 vaccination drive on Friday, July 23, at civic and government-run centres after the arrival of a fresh stock of vaccines.

The BMC suspended the vaccination drive at BMC and Maharashtra government-run centres on Wednesday and Thursday due to a shortage of doses. Meanwhile, it operated only 58 of the 309 vaccination centres on Tuesday, July 20. Maharashtra: No COVID-19 Death Due To Oxygen Shortage, Claims Rajesh Tope; Sena MP Sanjay Raut Opposes. On Wednesday, July 21, Maharashtra Health Minister Rajesh Tope clarified that the state government never reported any death due to a shortage of oxygen during the second wave of coronavirus. This comes a day after the Central government on Tuesday, July 20, declared that no deaths due to lack of oxygen were specifically reported by states and UTs during the second COVID-19 wave.

In an interview with a media channel, Tope said: “We have never said that because of shortage of oxygen a COVID-19 patient has died in any hospital in the State. There is no record of any such case, nor have I made any statement to this effect. The fatalities that have occurred were due to co-morbidities or other medical ailments.” On the other hand, Shiv Sena MP Sanjay Raut, whose party shares power with the NCP and Congress in the state, said people whose relatives died due to oxygen shortage should take the Union government to court. Home vaccination for COVID-19 to start from August 1 in Mumbai. In an initiative to vaccinate older people, the Maharashtra government has decided to visit senior citizens and persons with disabilities who are bedridden and unable to go out of their homes to administer the COVID-19 vaccine.

Accordingly, a door-to-door vaccination campaign will start on August 1 in Mumbai. State Advocate General Ashutosh Kumbakoni gave this information to the High Court. Moreover, a bench of Chief Justice Dipankar Datta and Justice Girish Kulkarni heard the petition. The vaccines for the coronavirus are to be provided by Mumbai’s civic body, the Brihanmumbai Municipal Corporation (BMC) and they will be free of cost.

The Bombay High Court had earlier taken a firm stand on the issue of home vaccination. 28 People Moved After Landslide Near Mumbai’s GTB Nagar. Lok Adalat to be held on August 1 across all courts in Mumbai. BMC Looks To Assemble Drainage Around Bhandup Complex. Maharashtra: After SSC website, CET website crashes too. Mumbai: Lawyer attacked by goons with swords and rods in broad daylight; 3 arrested. Mumbai: Many areas of city faced power cuts and water cuts for over 8 hours. 21 people died due to mucormycosis so far in Navi Mumbai. Trip from Thane to Borivali will just be 15 minutes away.

Grab a bite at Doolally on weekends for INR 199 and INR 249. Nifty And Sensex End At New All Time High, Realty & IT Stocks Outperform. Mumbai: PWD To Use Land Meant for a Public Park as an Exclusive Garden for MLAs. Rising COVID Cases In Maharashtra, A Sign Of The Third Wave? CM Thackeray directs authorities to speed up power generation projects.