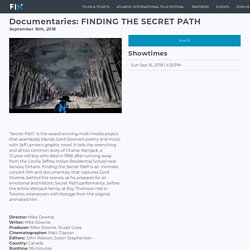 It tells the wrenching and all too common story of Chanie Wenjack, a 12-year-old boy who died in 1966 after running away from the Cecilia Jeffrey Indian Residential School near Kenora, Ontario. Finding the Secret Path is an intimate concert film and documentary that captures Gord Downie, behind the scenes, as he prepares for an emotional and historic Secret Path performance, before the entire Wenjack family, at Roy Thomson Hall in Toronto, interwoven with footage from the original animated film.

Heritage plaque gives provincial recognition to children’s graves. After a two-year journey for advocates seeking heritage recognition, the Regina Indian Industrial School cemetery has a plaque commemorating the dozens of children who died and were buried near the residential school site. 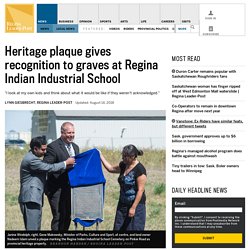 The plaque was unveiled near the cemetery Tuesday morning to the delight of Janine Windolph, the advocate who began the push for the cemetery’s commemoration and past president of the Regina Indian Industrial School Commemorative Association. “I look at my own kids and think about what it would be like if they weren’t acknowledged,” she said. The Weight of Your Heart. Chanie's Life Journey. "This school (sometimes referred to as the Shoal Lake school) in northwestern Ontario was built in 1901 just east of the Shoal Lake Reserve. 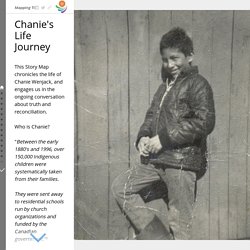 Before sending their children to the school, local band leaders won an agreement from the school that there would be no heavy work for younger children, no baptism without consent, at least a half day of class time for older children, and provision for children to be absent for traditional events. Polaris 2017: 5 things you didn't know about Gord Downie's Secret Path - CBC Music. In 2016, Tragically Hip frontman Gord Downie shocked fans when he announced he had terminal brain cancer, and later in the year the band set out on a cross-country tour. 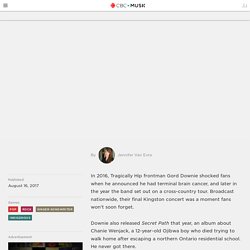 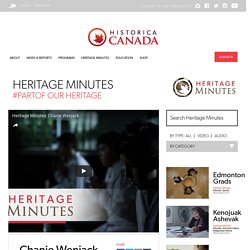 Chanie ran away from school at age 12 and died during his attempt to return home. His death sparked the first inquest into the treatment of Indigenous children at residential schools. Chanie grew up in Ogoki Post, on the Anishinaabe Marten Falls Reserve in Northern Ontario, where he lived with his family until he was taken from them to attend residential school in 1963. How Chanie Wenjack chose Joseph Boyden. Chanie Wenjack. 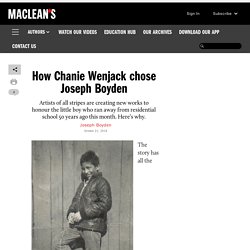 (The Wenjack Family) The story has all the hallmarks of great tragedy: an innocent boy lost in the vast wilds of northern Ontario in late October. He’s desperately trying to make his way home as the weather begins its brutal turn. Chanie Wenjack. Chanie “Charlie” Wenjack (born 19 January 1954; died 23 October 1966 near Redditt, ON). 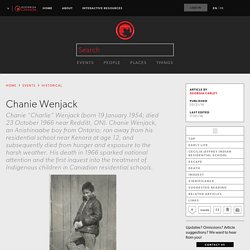 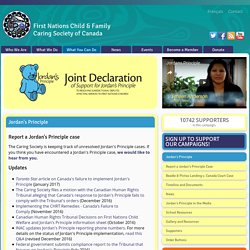 If you think you have encountered a Jordan's Principle case, we would like to hear from you. Updates Background. Trc calls to action. SECRET PATH - GORD DOWNIE and JEFF LEMIRE. Teacher Guides/Lesson Plans. Many organizations have already constructed curriculum that you may find useful with your learner group. 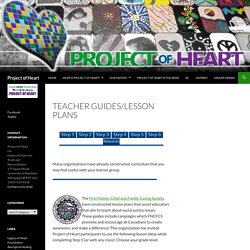 The First Nation Child and Family Caring Society have constructed lesson plans that assist educators that aim to teach about social justice issues. These guides include campaigns which FNCFCS promote and encourage all Canadians to create awareness and make a difference! This organization has invited Project of Heart participants to use the following lesson ideas while completing Step 5 (or with any class)! Choose your grade level: Education Resources K-2 Education Resources 3-6 Education Resources 7-8 Education Resources 9-12 Sherryl Maglione is a teacher who has taught exclusively in First Nation schools during her entire sixteen-year teaching career, most recently senior high English Language Arts at the Sioux Valley High School in Brandon, Manitoba. 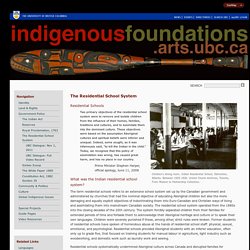 Between 1925-1936. United Church Archives, Toronto, From Mission to Partnership Collection. Residential Schools Two primary objectives of the residential school system were to remove and isolate children from the influence of their homes, families, traditions and cultures, and to assimilate them into the dominant culture. These objectives were based on the assumption Aboriginal cultures and spiritual beliefs were inferior and unequal. Prime Minister Stephen Harper, official apology, June 11, 2008. Where Are The Children. Aboriginal Healing Foundation. 100 Years of Loss. The following reading list is a selection of the growing number of publications that document the history and legacy of residential schools. It is by no means complete and is a work in progress.

For Younger Readers. A timeline of residential schools, the Truth and Reconciliation Commission. Students in a classroom in Resolution, N.W.T. ((National Archives of Canada)) March 14, 2011 The Truth and Reconciliation Commission begins three months of hearings in 19 northern communities in the lead up to its second national event, which will be held in Inuvik, N.W.T. between June 28 and July 1. Nov. 12, 2010 The government of Canada announces it will endorse the UN Declaration on the Rights of Indigenous Peoples, a non-binding document that describes the individual and collective rights of indigenous peoples around the world.

Indian Residential Schools and Reconciliation Resources - FNESC. The Indian Residential Schools and Reconciliation Teacher Resource Guides for grades 5, 10 and 11/12 were developed by the First Nations Education Steering Committee and the First Nations Schools Association. They are our response to the call by the Truth and Reconciliation Commission of Canada for education bodies to develop age-appropriate educational materials about Indian residential schools. It is our hope that these resources will help students of all cultural backgrounds gain an understanding of the history of the relationship between Indigenous and non-Indigenous people over Canada’s history, with a focus on the BC experience. The materials are also designed to engage young people to take part in the journey of reconciliation. Truth and Reconciliation Commission of Canada (TRC) It is difficult to place an exact figure on the number of residential schools to which Aboriginal people have been sent in Canada.

While religious orders had been operating such schools before Confederation in 1867, it was not the 1880s that the federal government fully embraced the residential school model for Aboriginal education. While the government began to close the schools in the 1970s, the last school remained in operation until 1996. For purposes of providing compensation to former students the Indian Residential School Settlement Agreement has identified 139 residential schools. Heritage Minutes Dive Into 'Darker Chapters' Of Canada's History. Two new Heritage Minutes released Tuesday focus on significant moments in Indigenous history. The clips, produced by Historica Canada, were written by acclaimed author Joseph Boyden, according to a press release. Bring reconciliation into the classroom. Saskatchewan's Project of Heart Website. Residential schools. 100 Years of Loss. Discovering The Secret Path.

SECRET PATH - GORD DOWNIE and JEFF LEMIRE. STATEMENT BY GORD DOWNIEOgoki Post, Ontario September 9, 2016 Mike Downie introduced me to Chanie Wenjack; he gave me the story from Ian Adam’s Maclean’s magazine story dating back to February 6, 1967, “The Lonely Death of Charlie Wenjack.” Chanie was a young boy who died on October 22, 1966, walking the railroad tracks, trying to escape from the Cecilia Jeffrey Indian Residential School to walk home.

Chanie’s home was 400 miles away. He didn’t know that. He didn’t know where it was, nor know how to find it, but, like so many kids - more than anyone will be able to imagine - he tried. Chanie haunts me. All of those Governments, and all of those Churches, for all of those years, misused themselves. I am trying in this small way to help spread what Murray Sinclair said, “This is not an aboriginal problem. I have always wondered why, even as a kid, I never thought of Canada as a country – It’s not a popular thought; you keep it to yourself – I never wrote of it as so. Analyzing The Secret Path.