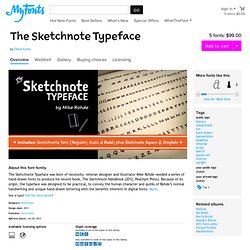 Because of its origin, the typeface was designed to be practical, to convey the human character and quirks of Rohde’s normal handwriting and unique hand-drawn lettering with the benefits inherent in digital fonts. More… Sketchnote Square is a bold, somewhat compressed headline type that complements the Sketchnote Text fonts. Drawn instead of written, the characters in Square have neat little happenstance voids within the strokes.

Square also includes a handy selection of fun icons, rules, and arrows—some functional tidbits for your design projects. The texture of Sketchnote is the result of actual ink-spread on paper, captured in scans of the written letterforms and left intact during production to preserve that feeling. Gentona. 23:27 - YOUR USER PROFILE IS A BATTLEGROUND™ - 00:08. 30 of the most beautiful typeface designs released last month (April) Anyone who’s tried their hand at designing a typeface will know it’s a wildly difficult process, and to actually come out at the end with something attractive takes an extreme amount of skill, taste and patience. 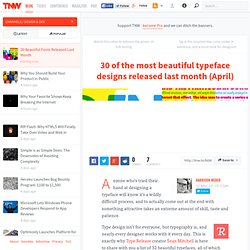 Type design isn’t for everyone, but typography is, and nearly every designer works with it every day. This is exactly why Type Release creator Sean Mitchell is here to share with you a list of 32 beautiful typefaces, all of which were released over the last month. See his findings from April, only on TNW: Wordshape: Vaud A neutral, yet formally nuanced grotesk typeface. Latinotype: Trend Hand Made A typeface made of layers, taking as a basis a sans and a slab font, Trend is trending. 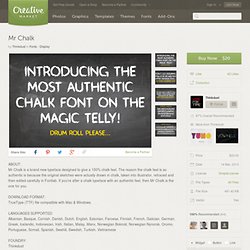 The reason the chalk feel is so authentic is because the original sketches were actually drawn in chalk, taken into illustrator, retraced and then edited carefully in Fontlab. If you're after a chalk typeface with an authentic feel, then Mr Chalk is the one for you. DOWNLOAD FORMAT: TrueType (TTF) file compatible with Mac & Windows. Display Fonts ~ Bahn Pro FAMILY by PF MARTINI. The Sketchnote Typeface. Soto. Wordshape. Substance. Buy & Freely Download Cool Fonts & Typefaces. Sys 2.0™ Eco Coding. Lucida Sans Typewriter. Realist. Realist is a straightforward typeface that speaks in a clear voice without appearing stern. 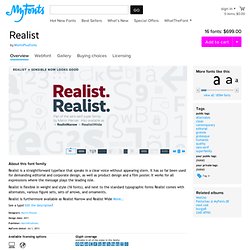 It has so far been used for demanding editorial and corporate design, as well as product design and a film poster. It works for all expressions where the message plays the leading role. Realist is flexible in weight and style (16 fonts), and next to the standard typographic forms Realist comes with alternates, various figure sets, sets of arrows, and ornaments. Realist is furthermore available as Realist Narrow and Realist Wide More… Realist was chosen by Typographica as one of the Favorite Typefaces of 2011. Helia. Aleo free font. Download the 105 best free fonts. This list represents the 100 best free fonts we've found in a variety of styles. 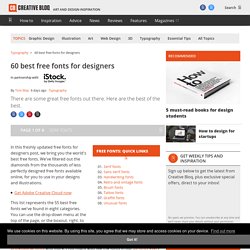 We have many other articles covering specialist font types including handwriting fonts, graffiti fonts, web fonts and more, but we have sectioned our main list under these styles: Most of the typeface collections listed here can be used in your projects, but please be sure to check the terms. Now join us as we present you with 100 of the best free fonts, which you can download and use today. Body fonts 01. Free for personal use, Jack Harvatt's Kayak font is a pure delight. 02.

Format: TTF Described as 'modern Antiqua' (a group of classic 'old style' typefaces), Oranienbaum has been created by Ivan Gladkikh and Oleg Pospelov. Legible sans serif display fonts 03. Format: OTF Shrenik Ganatra is the designer behind Adam. 04. Ailerons was inspired by aircraft models from the 1940s. 05. Format: TTF/OTF Arkhip was created by the team at Moscow-based Klimov Design. 06. 07.