Hutchison Water. Israel Seeks European Aid in Plan to Pump Desalinated Water to the Sea of Galilee. Israel’s Water Authority and its Ministry of Energy have sketched a plan to build a tunnel that will annually pump between 300 million and 500 million cubic meters of desalinated water to the receding Sea of Galilee, two people familiar with the matter who spoke on condition of anonymity told Calcalist. 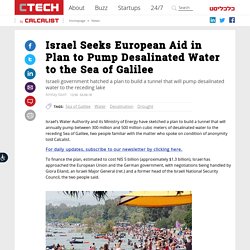 For daily updates, subscribe to our newsletter by clicking here. To finance the plan, estimated to cost NIS 5 billion (approximately $1.3 billion), Israel has approached the European Union and the German government, with negotiations being handled by Giora Eiland, an Israeli Major General (ret.) and a former head of the Israeli National Security Council, the two people said. The Sea of Galilee. Photo: Efi Sharir Despite successful desalination and wastewater recycling efforts, in the past four years, Israel has been facing water shortages caused by a long drought. According to the Water Authority’s data, 1.6 million cubic meters poured into the Sea of Galilee equal a 1 cm rise in its level.

Thewatereconomyofisrael. The Water Economy of Israel. In general, the water economy of Israel fulfills its functions properly thanks to an up-to-date technical system, knowledge accumulated over the years, a solid legal base, and the professional cadre working today as well as those who contributed to its development and advancement in the past. 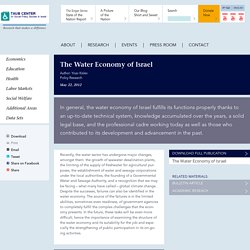 Recently, the water sector has undergone major changes, amongst them: the growth of seawater desalination plants, the limiting of the supply of freshwater for agricultural purposes, the establishment of water and sewage corporations under the local authorities, the founding of a Governmental Water and Sewage Authority, and a recognition that we may be facing – what many have called – global climate change. Despite the successes, failures can also be identified in the water economy.

The source of the failures is in the limited abilities, sometimes even readiness, of government agencies to completely fulfill the complex challenges that the economy presents. Pardon Our Interruption. Water-Gen - Accueil. How to Defeat Drought. Cape Town, a city of some 4 million people, is on the verge of running out of water. 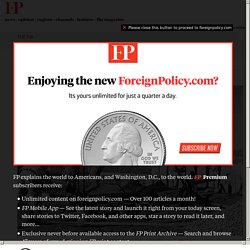 Terrifying as it may sound, water scarcity never happens by surprise. At the national, provincial, and municipal levels, South Africa’s leaders ignored Cape Town’s shrinking water supply until it became a crisis. The mistakes were made at every level. Israel will boost desalination to fight a five-year drought. אמיר יחיאלי, Home systems. Home systems By Amir Yechieli The water crisis in Israel is mostly due to water mismanagement. 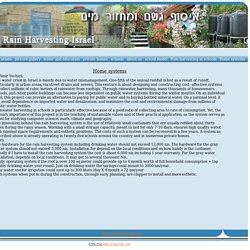 One-fifth of the annual rainfall is lost as a result of runoff, particularly in urban areas, via street drains and sewers. This venture is about designing and constructing cost- effective systems to collect millions of cubic meters of rainwater from rooftops. מפלס הכינרת - רשות הכינרת. Urban Water Efficiency. Miya water. LeakSmart can sense floods and stop them in under 10 seconds.

The dream of the smart home doesn't just mean voice control or futuristic touchscreens; It means your home reacts -- to you and to its own needs. 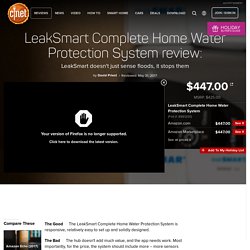 This type of responsiveness is what LeakSmart creates with its Complete Home Water Protection System: a leak sensor, water valve and connecting hub, all packaged for $425. The logic behind the LeakSmart System is simple: when a pipe bursts and your home floods, every second wasted means more damage done and more money lost. A sensor alone could alert you to the disaster, but with its connected valve, LeakSmart can stymie the source of the damage within seconds.

It's a sound solution, it works effectively and the benefit certainly outweighs the cost. But the price tag doesn't have to be so high, and that fact alone will likely turn off many potential users. What you get for the price Paying $425 for any smart home system should give you pause -- it's a lot of money. For comparison, ZigBee flood sensors generally cost around $40. Water Leak Detection System with Automatic Shut Off for the Home. Flo smart water monitoring system watches your water. The Flo water security and management system is a new Wi-Fi connected device professionally installed on your main water supply line, Flo Technologies announced Monday. 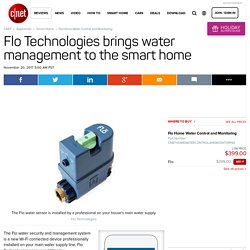 The system uses an iOS or Android app that controls conservation, monitoring and security settings. By continually monitoring your home's water flow, pressure and temperature, Flo detects abnormalities to help you avoid problems like bursting pipes. Flo has water pressure sensors which use machine learning to proactively detect leaks. The system can automatically shut off the water supply in response to a pipe burst, flooding or other irregularities.

Fluence wins foreign contract for seawater desalination. Fluence Corporation was awarded a €1.5M contract by Vinci Construction Grands Projets (France) to supply three NIROBOX reverse-osmosis seawater desalination units for the French island of Mayotte between Madagascar and the coast of Mozambique, in the Indian Ocean. 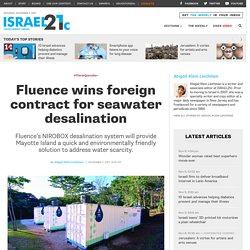 This follows the company’s recent award of a NIROBOX desalination plant in South Africa. “The global decentralized water purification market value will increase from US $2.7 billion in 2016 to US $4.4 billion in 2021. We have designed our NIROBOX smart packaged solution to capture a large part of this market,” said Henry Charrabé, Fluence managing director and CEO. MENA Water Beyond Scarcity. Hydro Spin Our Solutions - how hydropower works. Our Solutions Cost-effective, patented, renewable energy solution. 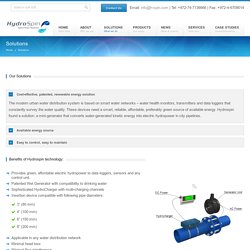 Scientists are making it rain in Abu Dhabi. The Energy - Water Nexus. Introduction There is a close connection, or nexus G, between energy and water: It takes a significant amount of water to create energy. 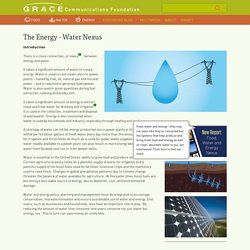 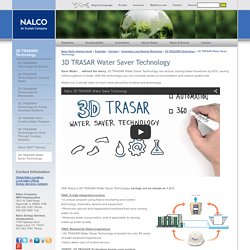 With this technology you can increase cycles of concentration and reduce system risk. Watch our 2 minute video to learn more about this exciting new technology With Nalco’s 3D TRASAR Water Saver Technology, savings are as simple as 1-2-3: ONE: A fully integrated system. On the Money: The Best Water-Saving Program You've Never Heard Of. Technology Innovation and Water Reuse. Several links below exit EPA By Nancy Stoner Water reuse is one of the areas where innovative technology can solve challenges and create opportunities, and was identified in the Water Technology Innovation Blueprint that I released in March. Water quantity issues are increasingly part of conversations as I talk with people across the country. Drought conditions are becoming more frequent and we need to consider that when planning for water needs. We can learn from communities like Austin, Texas, which are not only conserving more water, but are developing distribution networks to reuse more of the water treated at wastewater facilities.

Why aren't We Getting Our Money's Worth from Our Water Infrastructure? I’d like to believe our country is very much aware of the threat to our existing water infrastructure resources, especially after our recent report on water stress and climate variability. I’m thoroughly unconvinced, however, that many Americans realize the manner in which we’re planning to fix our water problems may be entirely wrong. Our latest report on America’s Water at the Columbia Water Center is among the very first to systematically explore national survey data on water rates and identify the major financial influences pushing and pulling on our water utilities.

Chapter 6 - Water Conservation - The Environmentally Responsible Construction and Renovation Handbook - Real Property. Chapter 6 - Water Conservation 6.1 Introduction Canada is in the envious situation of having one-fifth of the world's fresh water supply. Canadian water usage per capita is the second highest in the world at approximately 326 litres per day. To put this in perspective, this is double the per capita usage of France and Germany. This level of water consumption places an ever-increasing strain on our fresh water resources and requires energy and monetary expenditures to provide clean water for our everyday use. Facts About Water Loss. Miya purchased Portuguese water giant Indaqua, entering into a new mega-scale partnership that expands its offering into the water and wastewater segment.

Read More... » The contract with the National Water Commission of Jamaica is designed to maximize efficiency of the water system in Kingston. Within five years, daily savings of more than 70 million liters of fresh water are expected, enough to supply water to additional 500,000 people. Read More... » An independent research journalist from the New York Times contacted Miya for expert interviews on urban water efficiency. מריח רע: תביעה ייצוגית של 12.5 מיליון כנגד שרפי כרמל. חברת "שיא מגופים" מציעה פתרון יעיל וחסכוני לטיפול בפיצוצים השכיחים בצינורות המים בערים. Sustainable Earth: Water. Clean water is essential for life, but most people in the developed world don't think much about the water they use for drinking, food preparation, and sanitation. In developing nations, however, the search for safe drinking water can be a daily crisis. Millions of people die each year, most of them children, from largely preventable diseases caused by a lack of access to clean water and proper sanitation.

Sandra Postel, director of the Global Water Policy Project and the National Geographic Society's freshwater fellow, said freshwater scarcity presents a growing problem to be addressed during the United Nations Conference on Sustainable Development (Rio+20) in Brazil from June 20 to 22. "It manifests itself in the depletion of groundwater, and the drying up of rivers and lakes upon which people depend for irrigation to grow their food," she said.