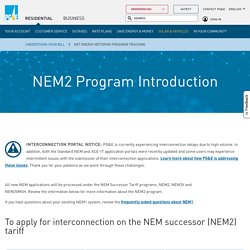 Opens in new Window., updating the Rule 21 Tariff to include new requirements concerning inverter-based technologies seeking to interconnect to PG&E's grid. Based on the approved Advice Letter and in accordance with Section H.3.d. (Sheet 164) of the Rule 21 Tariff (PDF, 17.0 MB)PDF. Opens in new Window., all first-time interconnection applications received after September 8, 2017 must install "Smart Inverters. 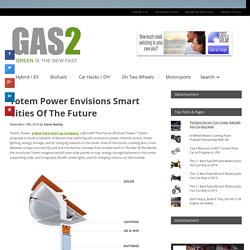 Totem proposes to build a network of devices that will bring zero emissions power, internet access, street lighting, energy storage, and EV charging stations to the smart cities of the future. Looking like a cross between a large concrete lily pad and the Martian armada that invaded earth in The War Of The Worlds, the structures Totem imagines would have solar panels on top, energy storage batteries in the center supporting stalk, and integrated 4G wifi, street lights, and EV charging stations on the outside.

The central focus of the Totem system is reducing carbon emissions in cities. Now that the Trump pseudo-administration has declared war on environmental regulations and embraced fossil fuels as the pathway to making America great again, cities, which account for over 70% of all emissions, may have to look inward for ways to combat climate change. Tesla offers to buy SolarCity for $2.6 billion - Aug. 1, 2016. Tesla (TSLA) has made a $2.6 billion bid to buy SolarCity. 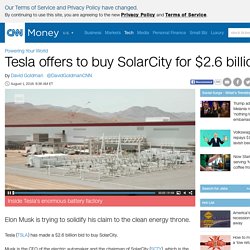 Musk is the CEO of the electric automaker and the chairman of SolarCity (SCTY), which is the leading solar panel seller in the country. He owns 22% of SolarCity. Musk says he wants the companies to combine in order to create $150 million in cost efficiencies. Tesla said the combination would create the world's only "integrated sustainable energy company. " For example, Tesla is developing an energy storage solution called Powerwall, in which people can power up a battery and go off the electric grid. As part of Musk's Tesla "master plan" published two weeks ago, he said Tesla needed to buy Solar City to combine those offerings. "Now that Tesla is ready to scale Powerwall and SolarCity is ready to provide highly differentiated solar, the time has come to bring them together," Musk said. The offer price of $2.6 billion is lower than than $3 billion that Tesla initially announced.

Guardian Environment Network: Taiwan's solar stadium 100% powered by the sun. Taiwan recently finished construction on an incredible solar-powered stadium that will generate 100% of its electricity from photovoltaic technology! 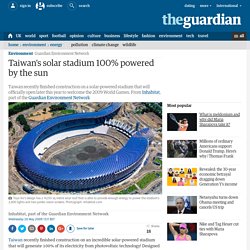 Designed by Toyo Ito, the dragon-shaped 50,000 seat arena is clad in 8,844 solar panels that illuminate the track and field with 3,300 lux. The project will officially open later this year to welcome the 2009 World Games. Building a new stadium is always a massive undertaking that requires millions of dollars, substantial physical labor, and a vast amount of electricity to keep it operating. Toyo Ito's design negates this energy drain with a stunning 14,155 sq meter solar roof that is able to provide enough energy to power the stadium's 3,300 lights and two jumbo vision screens. 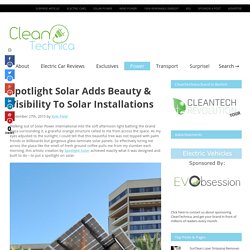 As my eyes adjusted to the sunlight, I could tell that this beautiful tree was not topped with palm fronds or billboards but gorgeous glass-laminate solar panels. Running Out of Precious Land? Floating Solar PV Systems May Be a Solution - Renewable Energy World. San Diego, Calif. -- In June, a 1.18-MW PV system floating on a water reservoir became operational in Japan. 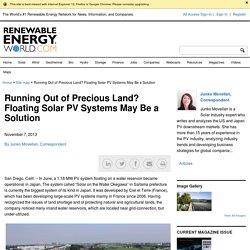 The system called “Solar on the Water Okegawa” in Saitama prefecture is currently the biggest system of its kind in Japan. It was developed by Ciel el Terre (France), which has been developing large-scale PV systems mainly in France since 2006. Having recognized the issues of land shortage and of protecting natural and agricultural lands, the company noticed many inland water reservoirs, which are located near grid-connection, but under-utilized.