New ‘smart’ cement mixtures could turn buildings into batteries. Buildings, bridges, street lamps and even curb-stones could be turned into cheap batteries with the discovery of new cement mixtures. 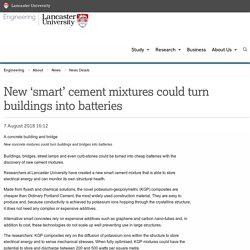 Researchers at Lancaster University have created a new smart cement mixture that is able to store electrical energy and can monitor its own structural health. Made from flyash and chemical solutions, the novel potassium-geopolymetric (KGP) composites are cheaper than Ordinary Portland Cement, the most widely used construction material. They are easy to produce and, because conductivity is achieved by potassium ions hopping through the crystalline structure, it does not need any complex or expensive additives.

Alternative smart concretes rely on expensive additives such as graphene and carbon nano-tubes and, in addition to cost, these technologies do not scale up well preventing use in large structures. The Transportation Revolution. ENWAY. Data-Smart City Solutions. Robotics startup robomart is the 'world's first self driving store' Subscribe to read. Revolutionary Israeli-Developed Paint Can Absorb Sun’s Hot Rays and Cool Buildings Down. Coating materials that protect against fire, water or extreme temperatures are nothing new. 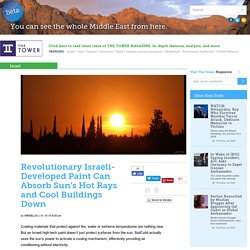 But an Israeli high-tech paint doesn’t just protect surfaces from the sun. SolCold actually uses the sun’s power to activate a cooling mechanism, effectively providing air conditioning without electricity. You read that right: This double-layered coating absorbs the hot rays of the sun and re-emits that energy in the form of cold. The hotter the solar radiation the more the coating cools down, making SolCold’s paint a potentially game-changing electricity-free solution for intensely sunny climates such as Africa and Central and South America. The Herzliya-based startup is raising funds and plans to begin trials within 18 months of closing the Series A round in the first quarter of 2018. SolCold’s product is generating interest for coating anything from chicken coops to cargo ships, malls to stadiums, cars to planes, satellites to hothouses, military equipment to apartment houses. 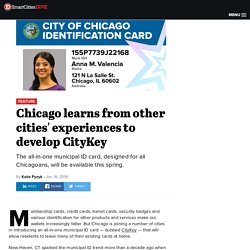 But Chicago is joining a number of cities in introducing an all-in-one municipal ID card — dubbed CityKey — that will allow residents to leave many of their existing cards at home. New Haven, CT sparked the municipal ID trend more than a decade ago when it took the controversial step of offering undocumented immigrants an identification card that would allow them to take advantage of certain city services such as using the library, opening a utility account or opening a bank account. The concept has evolved substantially since that time, but cities often fight the misconception that the cards are only for undocumented immigrants; they’re actually for everyone, especially populations that have difficulty obtaining ID cards. Chasing the Holy Grail of battery storage, scientists test solid state magnesium electrolyte. IBM developerWorks : Download IBM Cognos Business Intelligence Developer Edition V10.2.1 for Embedded and Commercial Analytics.

Increase the value of your solutions by embedding IBM® Cognos® to provide your customers with actionable analytics and the critical insight they need to make informed decisions. 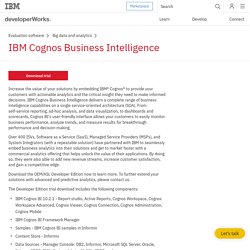 IBM Cognos Business Intelligence delivers a complete range of business intelligence capabilities on a single service-oriented architecture (SOA). From self-service reporting, ad-hoc analysis, and data visualization, to dashboards and scorecards, Cognos BI's user-friendly interface allows your customers to easily monitor business performance, analyze trends, and measure results for breakthrough performance and decision-making. Over 400 ISVs, Software as a Service (SaaS), Managed Service Providers (MSPs), and System Integrators (with a repeatable solution) have partnered with IBM to seamlessly embed business analytics into their solutions and get to market faster with a commercial analytics offering that helps unlock the value of their applications. 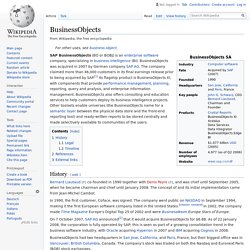 BusinessObjects was acquired in 2007 by German company SAP AG. The company claimed more than 46,000 customers in its final earnings release prior to being acquired by SAP.[1] Its flagship product is BusinessObjects XI, with components that provide performance management, planning, reporting, query and analysis, and enterprise information management. BusinessObjects also offers consulting and education services to help customers deploy its business intelligence projects. Other toolsets enable universes (the BusinessObjects name for a semantic layer between the physical data store and the front-end reporting tool) and ready-written reports to be stored centrally and made selectively available to communities of the users. 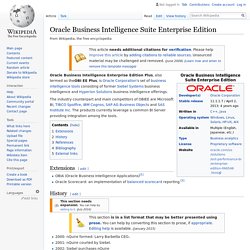 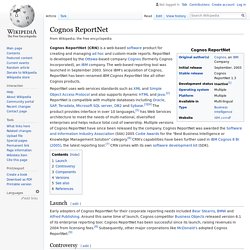 ReportNet is developed by the Ottawa-based company Cognos (formerly Cognos Incorporated), an IBM company. IBM Cognos Analytics on Cloud - Overview - Israel. Software Products. Browse for products using any method on this page Not in United States? 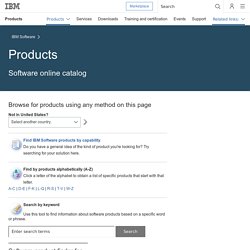 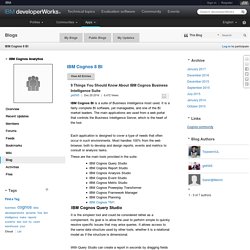 It is a fairly complete BI software, yet manageable, and one of the BI market leaders. The main applications are used from a web portal that controls the Business Intelligence Server, which is the heart of the tool. This portal is called Cognos Connection and from the same, provided by web, accessing management options environment and services to the different applications that provides Cognos BI, to the folder structure that reports are organized , to dashboards, and other accessories that can be integrated into the portal. Buoy is a whole-home water monitoring and alert system. Enlarge Image Your home's water supply is serious business. 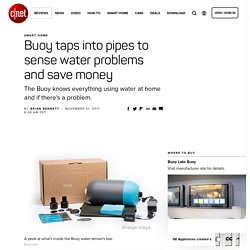 Most people though take it for granted, until there's a problem. The $799 Buoy device, out now, is designed to arm you with hard data about what's using water where, when and how much. In fact it's one of the few products of its kind to offer separate water usage info split out by appliance and plumbing fixture. World’s First Artificial Kidney Is All Set To Replace Dialysis in 2-3 Years. Here is how it works ! - Daily Tips. German automotive giant eyes Israeli cybersecurity startup – Israel Hayom. One of Germany's biggest automotive corporations, Continental, has announced plans to acquire Israeli startup Argus Cyber Security for some $450 million. Argus, founded in 2013 by three veterans of the IDF's elite 8200 Intelligence Unit, develops systems that defend cars' computer systems against cyberattacks, a field considered vital in the dawning age of self-driving cars.

The company has offices in Tel Aviv, Detroit, Silicon Valley, Stuttgart and Tokyo, and holds 38 granted and pending patents. Meet Butterfly iQ - Whole body imaging, under $2k. These tangled carbon nanotubes can harvest energy directly from breathing and ocean waves. Researchers Can Spot Earthquakes Using Fiber Optic Cables. Earthquakes are some of our planet's most devastating natural disasters. With almost no warning, an earthquake can level entire cities in a matter of minutes. For the millions of people living on or near fault lines, a few extra minutes of warning can mean the difference between life and death, so it's crucial that we're able to see major earthquakes coming as soon as possible. Advertisement - Continue Reading Below Mostly, that requires building sensitive earthquake detectors that can measure the smallest of quakes, which can signal that a larger one is on the way. It's a bird...It's a plane...It's an edible aid drone!

Better, Faster Food. The Superpedestrian Copenhagen Wheel lives up to the hype (Review) : TreeHugger. In which I get to put this long awaited drop-in e-bike conversion wheel through its paces, and find it to be electrifying. In the current market, those who are considering going electric on their bicycles have a lot of choices, ranging from incredibly cheap crowdfunded bikes to top-of-the-line electric cargo bikes to drop-in e-bike conversions, and while that variety can make it challenging to sort through to find the right e-bike, it also ensures that there are appropriate e-bikes available for almost every situation. Although a purpose-built electric bike with all of the bells and whistles may be the best choice for some riders, others may want a large cargo capacity, while still others may be looking for a way to keep the bike they love while adding an electric drive system to it.

Meet RAMBOW: Israel's latest unmanned ground vehicle. The Rambow. (photo credit: METEOR AEROSPACE) Israel’s Meteor Aerospace Ltd. unveiled RAMBOW, its latest unmanned ground vehicle, at the Autonomous Unmanned Systems and Robotics (AUS&R) 2017 Air Show in Rishon Lezion on Monday. The air show was organized by iHLS, an enterprise dealing with Israeli homeland security. Designed with a low silhouette for a range of defense and homeland security missions, RAMBOW can participate in a variety of missions such as ground warfare, intelligence gathering and logistical supply, as well as strategic facilities and border defense, with no risk to personnel. “The RAMBOW is powered by a unique electrical drive system, integrating innovative power and autonomous driving technologies,” the company said. The unmanned ground vehicle (UGV) has a rear bay that can carry up to 700 kg. and a forward mount that can carry a remote-controlled weapon station with a heavy machine gun, or other mission equipment.

FT.SARADEE - สุดยอดเทคโนโลยีแห่งอนาคต....... New battery can charge phone in 60 seconds. In new leap for AI: computer chips that can smell. A technology expert has created a computer chip based on mice neurons that could recognise the smell of explosives. The device could be implanted into the brain of future robots, which could be trained to recognise danger via odours, replacing traditional airport security.

Latest Smart Technology Automatic Construction Building Easy, Fastest Extreme Heavy Skill Build. Smart Bricks - A New Way to Build. China’s Quantum Satellite- the end of communications hacking? In recent years, China has experienced many major technological advances in the field of space science. Product — Pavegen - The Next Step. Glassonweb. New plastic wrap might keep buildings cool even when the sun is shining : TreeHugger. It sounds crazy in the headlines: Newly engineered material can cool roofs, structures with zero energy consumption. Some are more effusive, suggesting that This film might just save the planet. Roads that Pay for Themselves: Startup Nears Two Smart Pavement Pilot Project Contracts. After years of planning, the next several months are when Tim Sylvester will get the chance to start testing out what he’s been telling people for years: roads can pay for themselves. Sylvester’s company, Integrated Roadways, wants to put sensors, phone and Internet connectivity and other hardware inside the surfaces society drives on.

Last week, Elon Musk tweeted out that he got "verbal approval" to build a hyperloop — a sealed tube where a pod carrying people or goods can travel free of air resistance — from New York to Washington D.C., with a travel time of 29 minutes. Nocamels.com - Israeli Innovation & Startup News. Slingshot water purifier. SlingShot. Get Ready for the ‘Internet of Moving Things’—the next Revolution in Mobile. Cree Jumps Into the LED Lighting Controls Market. Cree, the North Carolina-based producer of LED lighting systems, continues its steady pace of announcements. After beating analyst expectations for revenue in the fourth quarter of 2013 and becoming a lead business partner in President Obama's new manufacturing hub at North Carolina State University, the company is now moving aggressively into lighting controls for commercial office buildings.