The L.E.D. Quandary: Why There’s No Such Thing as “Built to Last” The light bulb that has brightened the fire-department garage in Livermore, California, for the past hundred and fifteen years will not burn out. 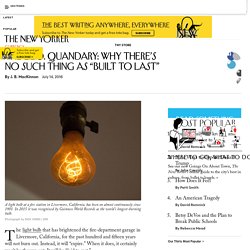 Instead, it will “expire.” When it does, it certainly won’t be thrown out. It will be “laid to rest.” “You have to use the correct terminology,” Tom Bramell, a retired deputy fire chief who has become the Livermore light’s leading historian, told me. The bulb has been on almost continuously since 1901, he said; in 2015, it surpassed a million hours in service, making it, according to Guinness World Records, the longest-burning in the world. Bramell so cuts the figure of a firefighter that he has smoke-colored eyes and hair, and a permanent hack from smoke inhalation (“I do a bag of cough drops a day”). The History of the Light Bulb. More than 150 years ago, inventors began working on a bright idea that would have a dramatic impact on how we use energy in our homes and offices. 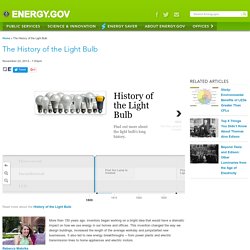 This invention changed the way we design buildings, increased the length of the average workday and jumpstarted new businesses. It also led to new energy breakthroughs -- from power plants and electric transmission lines to home appliances and electric motors. Like all great inventions, the light bulb can’t be credited to one inventor. How to get that old-fashioned light bulb glow without wasting so much energy. Thomas Edison would be pleased. 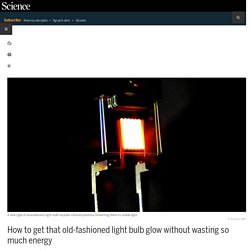 Researchers have come up with a way to dramatically improve the efficiency of his signature invention, the incandescent light bulb. The approach uses nanoengineered mirrors to recycle much of the heat produced by the filament and convert it into additional visible light. The new-age incandescents are still far from a commercial product, but their efficiency is already nearly as good as commercial LED bulbs, while still maintaining a warm old-fashioned glow. “This is beautiful work,” says Shawn-Yu Lin, an electrical engineer and optics expert at the Rensselaer Polytechnic Institute in Troy, New York. He and others note that there is plenty of room for further improving the mirrors, which could ultimately push the efficiency of the bulbs well beyond what is possible with today’s lighting technologies. Incandescent lights have changed little since Edison first perfected them. They also had to redesign the bulb’s tungsten filament.

CFL vs. incandescent: Battle of the bulb. Compact fluorescent light bulbs are often mentioned as one of the easiest ways to shrink your power bill and your carbon footprint. 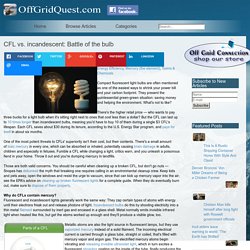 They present the quintessential green-green situation: saving money and helping the environment. What's not to like? There's the higher retail price — who wants to pay three bucks for a light bulb when it's sitting right next to ones that cost less than a dollar? But the CFL can last up to 10 times longer than incandescent bulbs, meaning you'd have to buy 10 of them during a single $3 CFL's lifespan. Each CFL saves about $30 during its tenure, according to the U.S. One of the most potent threats to CFLs' superiority isn't their cost, but their contents. Those are both valid concerns. Why do CFLs contain mercury? Fluorescent and incandescent lights generally work the same way: They zap certain types of atoms with energy until their electrons freak out and release photons of light.

Does mercury overshadow CFLs' benefits? All Hail The New Incandescent Light Bulb, Efficient As An LED Bulb. Despite plenty of technical advances, incandescent lightbulbs still rule when it comes to color and quality of light. 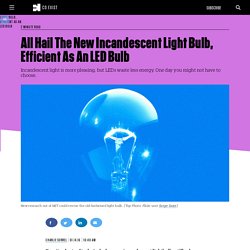 The trouble is, they don’t always last so long, and they waste almost all of their energy, emitting it as heat. But what if you could have the color of incandescents, with the efficiency of an LED? That’s the promise of new research out of MIT. The new bulb works by arraying nano-mirrors around a regular incandescent element, reflecting the wasted heat back into the element. This brings incandescents into the efficiency range of LED and fluorescent bulbs. Incandescent bulbs look so good because they emit all colors of light, whereas LEDs and other more efficient light sources only manage a subset of all the colors of visible light. Published this week in Nature, the paper details the method. The experiment, carried out by physicists Ognjen Ilic, Marin Soljačić, and John Joannopoulos, managed to triple the efficiency of an incandescent bulb to 6.6%. Compact Fluorescent Light Bulbs (CFLs) 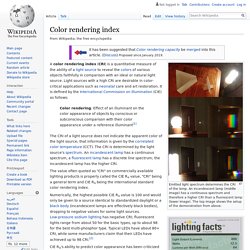 An incandescent lamp (middle image) has a continuous spectrum and therefore a higher CRI than a fluorescent lamp (lower image). The top image shows the setup of the demonstration from above. Color rendering index shown as Color Accuracy. A color rendering index (CRI) is a quantitative measure of the ability of a light source to reveal the colors of various objects faithfully in comparison with an ideal or natural light source. Light sources with a high CRI are desirable in color-critical applications such as neonatal care and art restoration.