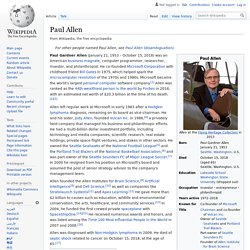 He is best known as the co-founder of Microsoft, alongside Bill Gates. As of March 2017, he was estimated to be the 42nd richest person in the world, with an estimated net worth of $19.9 billion.[2] Allen is the founder and Chairman[3] of Vulcan Inc., which manages his various business and philanthropic efforts. Alvin M. Weinberg - Wikipedia. Alvin Martin Weinberg (April 20, 1915 – October 18, 2006) was an American nuclear physicist who was the administrator at Oak Ridge National Laboratory (ORNL) during and after the Manhattan Project. 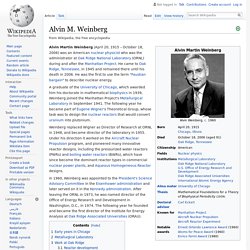 Billionaire Elon Musk: How I Became The Real 'Iron Man'. Katz Watson Group. Fran Katz Watson, founder and president of The Katz Watson Group, has been active in the political and fundraising arenas for the last ten election cycles. 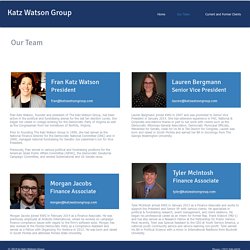 She began her career in college working for the Democratic Party of Virginia as well as the Congressman from her hometown of Norfolk, Virginia. Prior to founding The Katz Watson Group in 1999, she had served as the National Finance Director for the Democratic National Committee (DNC) and in 2000, managed national fundraising for Senator Joe Lieberman’s run for Vice President.

Previously, Fran served in various political and fundraising positions for the American Israel Public Affairs Committee (AIPAC), the Democratic Senatorial Campaign Committee, and several Gubernatorial and US Senate races. Lauren Bergmann joined KWG in 2007 and was promoted to Senior Vice President in January 2014. Morgan Jacobs joined KWG in February 2014 as a Finance Associate. Alex Laskey: How behavioral science can lower your energy bill. Pure Genius: How Dean Kamen's Invention Could Bring Clean Water To Millions. Deka Research & Development - About DEKA - Dean Kamen Founder. "You have teenagers thinking they're going to make millions as NBA stars when that's not realistic for even 1 percent of them. 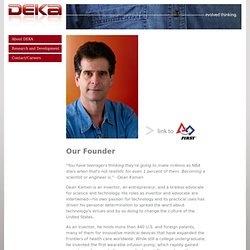 Becoming a scientist or engineer is. " -Dean Kamen Dean Kamen is an inventor, an entrepreneur, and a tireless advocate for science and technology. Dean Kamen: The emotion behind invention. Meet the Man Who Launched TED. Profound innovation has taken center stage at TED conferences worldwide since its inception in 1985. 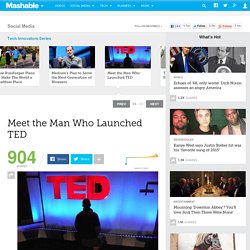 Over the years, products such as Java and Photoshop were introduced to the world. Renown architect Frank Gehry discussed his designs, for the first time, of the stunning Guggenheim Museum Bilbao in Spain. And one year, the film Shrek was shown in wire frame and the audience reaction was so strong, it initiated a crossover movement that animation wasn't just for kids. But this breeding of innovation is no coincidence. Great thinkers meet to spread ideas and concepts at the event, which stands for "Technology, Entertainment, Design," since its inception thanks to the mastermind behind the concept: Richard Saul Wurman. Dr. Inken Braunschmidt.

Ok let's file it in the right place – ofer2

Ofer I annotated the article you emailed me regarding Urban Farming This article only restates what is known that Urban Farming is a new concept that relatively expensive to maintain but has potential."... technologically advanced urban farms probably have a higher likelihood of success." Urban farming is relatively new and there are things that have been yet to be "fleshed out". For smaller community garden-style farms to last over the long term, they should consider becoming nonprofits to secure grant funding, and allows them to use interns and volunteers. Urban residents want to connect with how food is produced. – parkoren

She started working for RWE in 2004 within the internal Management Consultancy, RWE Consulting. 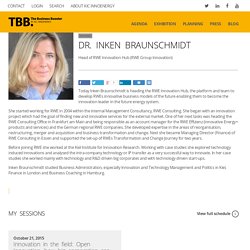 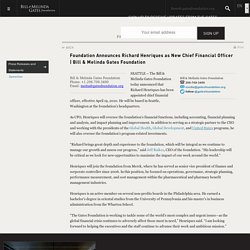 He will be based in Seattle, Washington at the foundation’s headquarters. As CFO, Henriques will oversee the foundation’s financial functions, including accounting, financial planning and analysis, and impact planning and improvement. In addition to serving as a strategic partner to the CEO and working with the presidents of the Global Health, Global Development, and United States programs, he will also oversee the foundation’s program-related investments. Ronald Cohen. Ronald Cohen, or Ron Cohen, may refer to: Ronald E. 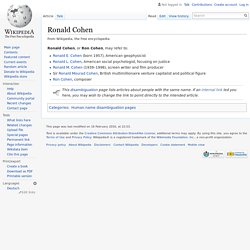 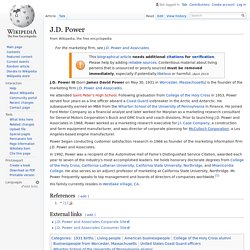 Power III (born James David Power on May 30, 1931 in Worcester, Massachusetts) is the founder of the marketing firm J.D. Power and Associates. He attended Saint Peter's High School. Following graduation from College of the Holy Cross in 1953, Power served four years as a line officer aboard a Coast Guard icebreaker in the Arctic and Antarctic. He subsequently earned an MBA from the Wharton School of the University of Pennsylvania in Finance. Harry Solomon (businessman) Sir Harry Solomon (born 1937) is the founder of Hillsdown Holdings, one of the United Kingdom's largest food businesses. 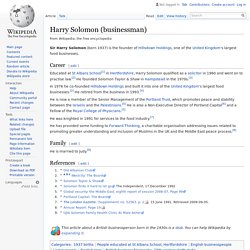 In 1976 he co-founded Hillsdown Holdings and built it into one of the United Kingdom's largest food businesses.[2] He retired from the business in 1993.[4] He is now a member of the Senior Management of the Portland Trust, which promotes peace and stability between the Israelis and the Palestinians.[5] He is also a Non-Executive Director of Portland Capital[6] and a Fellow of the Royal College of Physicians.[2] How J.D. Power drove change in auto research. James David Power III, 84, built a business selling auto companies something they didn’t initially want: their customers’ opinions. Detroit carmakers in the 1970s weren’t interested in independent reports about their shortcomings. But Japanese rivals, he says, were “fanatical” about understanding the American consumer and signed up for his surveys on quality. That established his foothold.

Today dozens of industries vie for top rankings from J.D. Mark Weinberger. Chairman and CEO Mark Weinberger is the Global Chairman & CEO of EY, a leading global professional services organization that provides assurance, tax, transaction and advisory services. In addition to his time at EY, Mark has previously served as the Assistant Secretary of the United States Department of the Treasury (Tax Policy) in the George W. Bush Administration. Mark was also appointed by President Clinton to serve on the US Social Security Administration Advisory Board, which advises the President and Congress on all aspects of the Social Security system.

Mark has also held other US government positions including Chief of Staff of President Clinton’s 1994 Bipartisan Commission on Entitlement and Tax Reform; Chief Tax and Budget Counsel to US Senator John Danforth (R-Missouri); advisor to the National Commission on Economic Growth and Tax Reform; and Commissioner on the National Commission on Retirement Policy. About Wharton. Bill Gates Talks About the Future of Energy. Jonathan Baron. Jonathan Miller Baron is a Professor of Psychology[1] at the University of Pennsylvania in the science of decision-making. Philip E. Tetlock. Philip E. Tetlock (born 1954) is an Canadian-American political science writer, and is currently the Annenberg University Professor at the University of Pennsylvania, where he is cross-appointed at the Wharton School and the School of Arts and Sciences. He has written several non-fiction books at the intersection of psychology, political science and organizational behavior, including Superforecasting: The Art and Science of Prediction; Expert Political Judgment: How Good Is It?