'Electrification of Everything' Would Spike US Electricity Use, but Lower Final Energy Consumption. Widespread deployment of EVs, heat pumps, and other electric technologies could increase U.S. electricity consumption by nearly 40 percent by mid-century, according to a new government report. 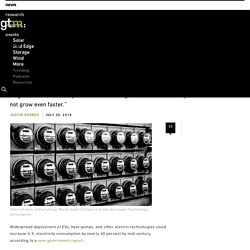 The report, the second in the National Renewable Energy Laboratory’s Electrification Futures Study series, analyzes the demand-side impacts of a transition to electricity in transportation, residential and commercial buildings, and industry through 2050. The report authors developed three scenarios to assess changes in electricity demand growth under varying levels of economy-wide electrification. San Diego weighs options to reach 100% renewable energy. Dive Brief: For more than a year, San Diego has been looking to establish a government-run community choice program that would help the city reach its goal of using 100% green energy by 2035. 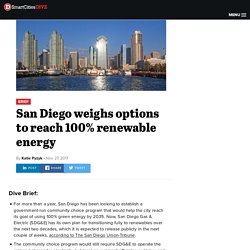 Now, San Diego Gas & Electric (SDG&E) has its own plan for transitioning fully to renewables over the next two decades, which it is expected to release publicly in the next couple of weeks, according to The San Diego Union-Tribune. Microgrid Antifragility: Don't Be a Turkey - HOMER Microgrid News and Insight : HOMER Microgrid News and Insight. Like banks “too big to fail,” the grids in most developed nations are so fragile and interdependent that they are vulnerable to natural or human-made disasters that can cripple whole cities and regions. 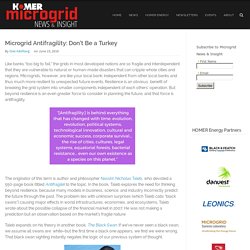 Microgrids, however, are like your local bank: independent from other local banks and thus much more resilient to unexpected future events. Resilience is an obvious benefit of breaking the grid system into smaller components independent of each others’ operation. But beyond resilience is an even greater force to consider in planning the future, and that force is antifragility. The originator of this term is author and philosopher Nassim Nicholas Taleb, who devoted a 550-page book (titled Antifragile) to the topic. In the book, Taleb explores the need for thinking beyond resilience, because many models in business, science, and industry incorrectly predict the future through the past.

Taleb expands on his theory in another book, The Black Swan. Reduce Your Carbon Footprint at Work. By: Kelly Fenn - Updated: 4 Jan 2013| *Discuss We spend a lot of time at work so it’s important to bring greener habits from home into the workplace. 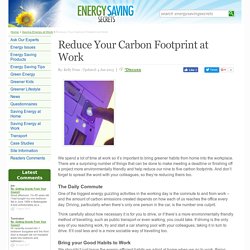 There are a surprising number of things that can be done to make meeting a deadline or finishing off a project more environmentally friendly and help reduce our nine to five carbon footprints. And don’t forget to spread the word with your colleagues, so they’re reducing theirs too. The Daily Commute. All About ISO14001. Energy Saving and Computers. Waste not, want not: Energy from thermoelectricity. Capturing the heat from your car’s exhaust or your computer and turning it into power has just become a hot prospect. 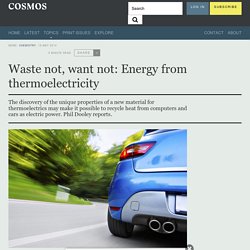 Mercouri Kanatzidis from Northwestern University has discovered that tin selenide, a well-known crystalline material long dismissed by experts in the field, is actually exceptionally efficient at converting heat into electricity. The finding smashes Kanatzidis’s own two-year-old record for a thermoelectric material – a 20% improvement that surprised even him.

“Tin selenide was not supposed to be a good thermoelectric material. No one thought it was worth looking at,” Kanatzidis says. Thermoelectrics are crystalline materials with the very useful property that if you heat one end of them, an electric charge starts to build at the opposite end. To work efficiently, a good thermoelectric material needs two key properties – high electrical conductivity, so the electrons can move, and low thermal conductivity, to keep the hot end hot and the cold end cold. How digital buildings can increase Europe’s energy efficiency – EURACTIV.com. This article is part of the policy topic coverage on Think Digital – smart cities Digitalisation opens up new avenues for us in many areas and modern technologies make our lives easier and more enjoyable. 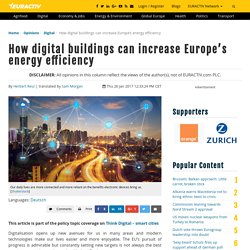 The EU’s pursuit of progress is admirable but constantly setting new targets is not always the best way to promote innovation, writes Herbert Reul. Herbert Reul is a German MEP with the European People’s Party and represents the Christian Democratic Union at national level. He is a member of the European Parliament’s Committee on Industry, Research and Energy. This opinion-piece is part of the policy topic coverage on Think Digital – smart cities. Homepage of Generation Foundation. The Grid Edge Awards: Building the 21st-Century Energy System. Projects & Technologies. Modern society needs safe, reliable and affordable energy to work properly and safeguard our standard of living. 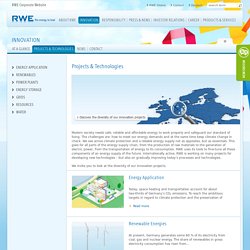 The challenges are: how to meet our energy demands and at the same time keep climate change in check. We see active climate protection and a reliable energy supply not as opposites, but as essentials. This goes for all parts of the energy supply chain, from the production of raw materials to the generation of electric power, from the transportation of energy to its consumption. Efficiency. Energy Efficiency solutions and profiles in Denmark. Saving energy in buildings Buildings account for 40 per cent of the global energy consumption and nearly the same share of CO2 emissions.Consequently, reducing the energy consumption of buildings will be a key priority for any country or community striving to save money and reduce CO2 emissions. 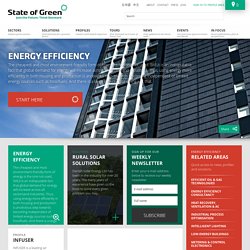 With today’s existing technologies, it is possible to reduce energy consumption in buildings by at least 50 per cent, and possibly as much as 80 per cent. These huge savings can be made quite easily with simple measures such as energy-efficient windows, insulation materials, heat regulators, ventilation systems and lighting,just to mention a few. Denmark has been a world leader in energy efficiency in buildings for decades and energy-efficient solutions are widely implemented in newly built and refurbished housing, offices and public institutions all over the country. Optimising industrial processes Join the Future. National Association of Energy Service Companies. 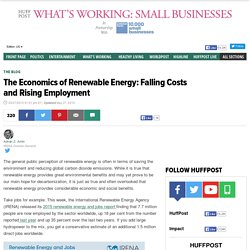 While it is true that renewable energy provides great environmental benefits and may yet prove to be our main hope for decarbonization, it is just as true and often overlooked that renewable energy provides considerable economic and social benefits. Take jobs for example. This week, the International Renewable Energy Agency (IRENA) released its 2015 renewable energy and jobs report finding that 7.7 million people are now employed by the sector worldwide, up 18 per cent from the number reported last year and up 35 percent over the last two years. Energy Efficiency. ILGBC - המועצה לבנייה ירוקה.