Southern school makes its own electricity - Israel Business, Ynetnews. An elementary school in the Gaza border region has completed a solar power system that will completely meet the school's needs. 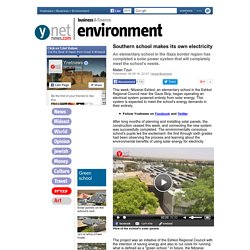 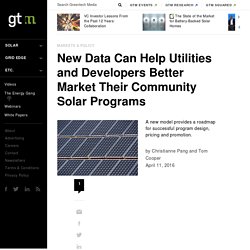 But many programs are mired in challenges. One issue: many utilities and developers have had trouble fully engaging customers. Community solar programs are different from familiar usage-based energy pricing models and are not easily understood by the general public. Hence, providers are faced with the unexpected need to spend more time and money on marketing. There seems no clear single path to success. As a result, GTM Research's yearly projections for U.S. community solar development through 2020 are roughly 20 percent lower than they were in 2015. To ensure community solar companies save money by marketing their programs right the first time, Pacific Consulting Group (PCG) created a model that takes the guesswork out of program rollouts. The study was based on a survey of 884 respondents from eight states. Program design makes a big difference in attracting subscribers Different markets have different forecasted market penetrations.

Love solar power but got no rooftop? "Shared solar" is coming for you. To date, solar power has mostly been available to utilities (as big power plants) or individual home and business owners (as rooftop panels). 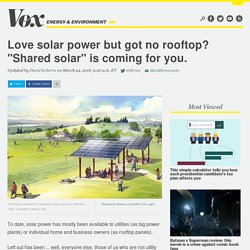 Left out has been ... well, everyone else, those of us who are not utility executives and do not have the money, wherewithal, or suitable rooftops to install solar ourselves. That's a lot of people who love solar power but have no way to get directly involved in it. Happily, that situation is rapidly changing, thanks to the growth of shared solar. Shared solar refers to small-scale solar installations that multiple individuals co-own, or that divide their power output among multiple "subscribed" individuals. It's a way for all those non-rooftop folks to directly support clean energy, while also supporting local jobs and economic development.

Here's how shared solar fits into the larger energy picture, how it works, its benefits and drawbacks, and its future potential. Homepage - Ormash Solar Energy. Once cutting edge, solar power becoming as commonplace as commuting. Five solar projects sprouting along the Massachusetts Turnpike and Route 3 are not the largest in the state, but they are among the most visible and striking examples of a solar industry that has grown more rapidly than most policy makers and energy specialists ever imagined. 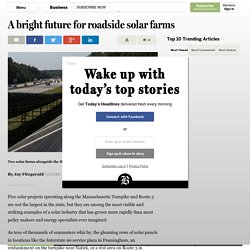 As tens of thousands of commuters whiz by, the gleaming rows of solar panels in locations like the Interstate 90 service plaza in Framingham, an embankment on the turnpike near Natick, or a rest area on Route 3 in Plymouth show how solar power has been integrated into daily life. The Framingham and Natick projects are already generating power; when the other sites in Framingham and Plymouth become operational later this month, the five solar farms will produce a combined 2,500 kilowatts of electricity, enough to power about 500 homes. 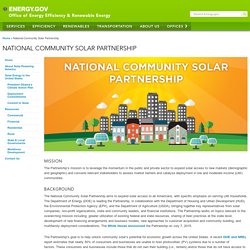 Background The National Community Solar Partnership aims to expand solar access to all Americans, with specific emphasis on serving LMI households. The Department of Energy (DOE) is leading the Partnership, in collaboration with the Department of Housing and Urban Development (HUD), the Environmental Protection Agency (EPA), and the Department of Agriculture (USDA), bringing together key representatives from solar companies, non-profit organizations, state and community leaders, and financial institutions.

Why Minnesota’s Community Solar Program is the Best Design - Renewable Energy World. I’ve been asked a lot of questions about Minnesota’s community solar program over the past couple years and it’s time to make one thing clear: Minnesota’s program is the best in the country. 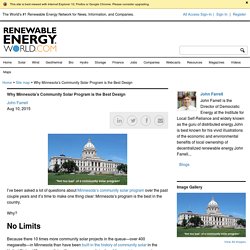 Why? California Bridges the Green Divide with Nation’s Biggest Solar Program for Low-income Renters - Renewable Energy World. Solar is not just for homeowners. 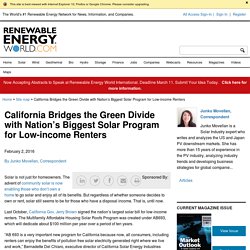 The advent of community solar is now enabling those who don’t own a home to go solar and enjoy all of its benefits. But regardless of whether someone decides to own or rent, solar still seems to be for those who have a disposal income. That is, until now. Last October, California Gov. Cities, States, Industry Increase Commitments to Promote Community Solar - Renewable Energy World. The White House on Nov. 17 said that 40 organizations have joined the National Community Solar Partnership (NCSP) since the initiative was launched in July, bringing the total number of city, state, business and organizational commitments to 68. 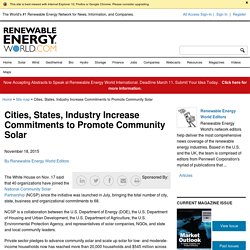