Cogeneration. Cogeneration or combined heat and power (CHP) is the use of a heat engine[1] or power station to generate electricity and useful heat at the same time. 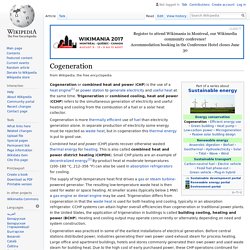 Trigeneration or combined cooling, heat and power (CCHP) refers to the simultaneous generation of electricity and useful heating and cooling from the combustion of a fuel or a solar heat collector. Cogeneration is a thermodynamically efficient use of fuel. In separate production of electricity, some energy must be discarded as waste heat, but in cogeneration some of this thermal energy is put to use. All thermal power plants emit heat during electricity generation, which can be released into the natural environment through cooling towers, flue gas, or by other means.

In contrast, CHP captures some or all of the by-product for heating, either very close to the plant, or—especially in Scandinavia and Eastern Europe—as hot water for district heating with temperatures ranging from approximately 80 to 130 °C. Overview[edit] MicroCHP[edit] Cogeneration. Stirling engine. Alpha-type Stirling engine. 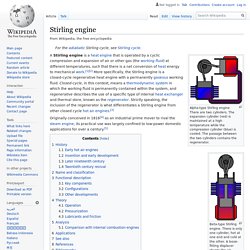 There are two cylinders. The expansion cylinder (red) is maintained at a high temperature while the compression cylinder (blue) is cooled. The passage between the two cylinders contains the regenerator. Beta-type Stirling engine. There is only one cylinder, hot at one end and cold at the other. Originally conceived in 1816 as an industrial prime mover to rival the steam engine, its practical use was largely confined to low-power domestic applications for over a century.[3] Stirling engines have a high efficiency compared to steam engines,[4] being able to reach 50% efficiency. Name and classification[edit] Home JENZ GmbH, Technology to process biomass, Mobile Chippers, Stationary Chippers, Chipper trucks, Biomass processors, special machines.

Our conceptSustainability means to increase the energy and resources productivity by the efficient use of raw materials and to produce innovative and high-quality machines for the recycling of biomass in an environmentally friendly way. 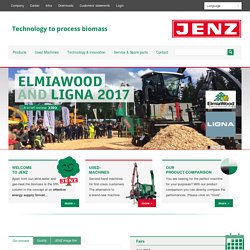 It is our common target to be the most innovative and economic company of our industry... Kogenerzia pdf. Towards energy self-sufficiency at a wastewater treatment plant - Cogeneration & On-Site Power Production. Wood waste gasification plant to generate 10 MW in UK « Recycling « Waste Management World. Birmingham Bio-Power has awarded a £47.8 million contract for the design, build and maintenance of a new 10.3 MW biomass gasification facility in Tyseley, Birmingham. 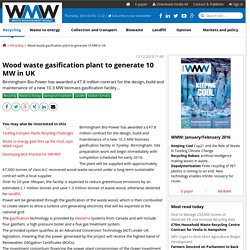 Site preparation work will begin immediately with completion scheduled for early 2016. The plant will be supplied with approximately 67,000 tonnes of class A-C recovered wood waste secured under a long-term sustainable contract with a local supplier. Over its 20 year lifespan, the facility is expected to reduce greenhouse emissions by an estimated 2.1 million tonnes and save 1.3 million tonnes of waste wood, otherwise destined for landfill. Gasification Plant Turns Wood Waste to Energy. Falcon Waste Development Land Company, part of the Larkfleet Group, and React Energy have submitted a planning application to build an energy recovery facility in Clay Cross, Derbyshire, UK. 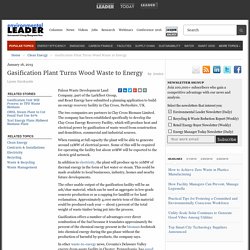 The two companies are partners in Clay Cross Biomass Limited. The company has been established specifically to develop the Clay Cross Energy Recovery Facility, which will produce heat and electrical power by gasification of waste wood from construction and demolition, commercial and industrial sources. When running at full capacity the plant will be able to generate around 12MW of electrical power. Some of this will be required for operating the facility but about 10MW will be exported to the electric grid network. In addition to electricity, the plant will produce up to 10MW of thermal energy in the form of hot water or steam. CEN TC 343 - ERFO. The work of CEN TC 343 is based on the work done on a mandate of the European Commission. 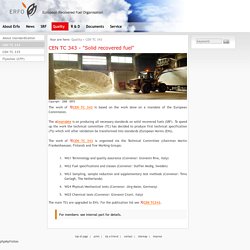 The mandate is on producing all necessary standards on solid recovered fuels (SRF). Global Pellets Production Surged in 2014, New Report Says - Renewable Energy World. Data released at the end of last year by the Food and Agriculture Organization (FAO) of the United Nations show that in 2014 wood pellets production increased a record 16 percent or 3 million metric tons. 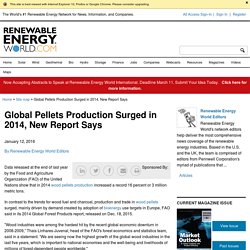 In contrast to the trends for wood fuel and charcoal, production and trade in wood pellets surged, mainly driven by demand created by adoption of bioenergy use targets in Europe, FAO said in its 2014 Global Forest Products report, released on Dec. 18, 2015. "Wood industries were among the hardest hit by the recent global economic downturn in 2008-2009,” Thais Linhares-Juvenal, head of the FAO's forest economics and statistics team, said in a statement. 407430. Besides Pelletizing Equipment, What Factors Affect Pellet Strength. Besides pelletizing equipment, there are factors influence your pellet strength and durability. 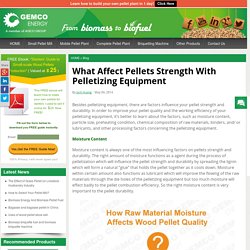 In order to improve your pellet quality and the working efficiency of your pelletizing equipment, it’s better to learn about the factors, such as moisture content, particle size, preheating condition, chemical composition of raw materials, binders, and/ or lubricants, and other processing factors concerning the pelletizing equipment. Moisture Content Moisture content is always one of the most influencing factors on pellets strength and durability. The right amount of moisture functions as a agent during the process of pelletization which will influence the pellet strength and durability by spreading the lignin which will form a natural “glue” that holds the pellet together as it cools down. Winwerksipd. Cogeneration is integral to the operation of modern facilities such as the UC San Diego campus, where a 30­-megawatt system is used to provide 85% of annual electricity consumption. 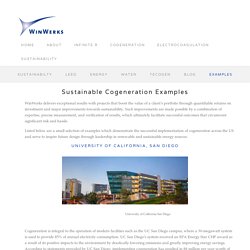