The multiplexed metropolis - Clever cities. EVEN thieves, it seems, now have a smartphone app. 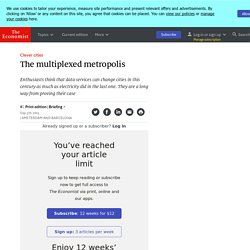 Makkie Klauwe (it means something like “easy pickings” in Amsterdam slang) reveals the city’s best places for pilfering—for instance Reestraat and Tuinstraat, where bicycles appear to be a good target. The app depends for its dark arts on pulling together publicly available data on disposable income, crime levels and other problems reported in a district.

A good place to steal might, for instance, have high income, low reported crime and broken streetlights. Get our daily newsletter. Relying on Algorithms and Bots Can Be Really, Really Dangerous. So you can’t wait for a self-driving car to take away the drudgery of driving? 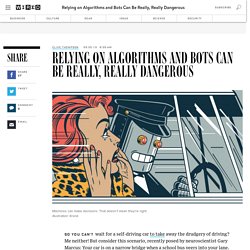 Me neither! But consider this scenario, recently posed by neuroscientist Gary Marcus: Your car is on a narrow bridge when a school bus veers into your lane. Should your self-driving car plunge off the bridge—sacrificing your life to save those of the children? Obviously, you won’t make the call. Why Ethnography Matters: On Anthropology and Its Publics. Big Data Needs Thick Data. 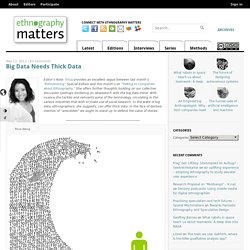 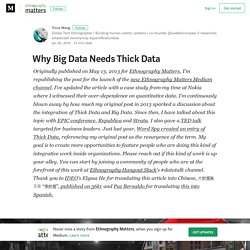 I’ve updated the article with a case study from my time at Nokia where I witnessed their over-dependence on quantitative data. Introduction to Oracle Database. This chapter provides an overview of Oracle Database and contains the following sections: About Relational Databases Every organization has information that it must store and manage to meet its requirements. 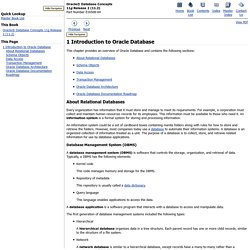 Tech titan efforts to stop terrorists from 'going dark' are, so far, inadequate. The Data Incubator. Array of Things. Stay ahead with data. Economist. Data is the newest form of infrastructure. Data's Evolution: The 'Exciting, Exhilarating, Scary Rollercoaster' of the Consumer Electronics Show. Security flaws put virtually all phones, computers at risk. America’s NSA spy agency is losing elite hackers over low pay and flagging morale. The National Security Agency is losing its top talent at a worrisome rate as highly skilled personnel, some disillusioned with the spy service’s leadership and an unpopular reorganisation, take higher-paying, more flexible jobs in the private sector. 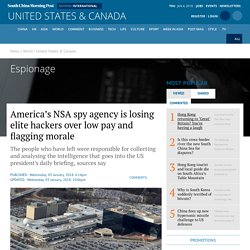 Since 2015, the NSA has lost several hundred hackers, engineers and data scientists, according to current and former US officials with knowledge of the matter. The potential impact on national security is significant, they said. Headquartered at Fort Meade in Maryland, the NSA employs a civilian workforce of about 21,000 there and is the largest producer of intelligence among the nation’s 17 spy agencies. The people who have left were responsible for collecting and analysing the intelligence that goes into the president’s daily briefing.

“Some synonym of the word ‘epidemic’ is the best way to describe it,” said Ellison Anne Williams, a former senior researcher at the NSA who left in 2016 to start her own data-security firm, Enveil. Does chip flaw expose nearly every device to hackers? Don’t panic, say makers, as they scramble for a fix. A newly discovered vulnerability in computer chips raised concerns Wednesday that hackers could access sensitive data on most modern systems, as technology firms sought to play down the security risks. 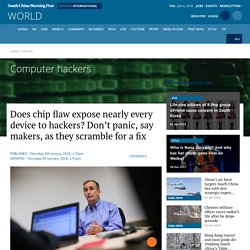 Security researchers said the vulnerability could let hackers steal sensitive information from nearly every modern computing device – from phones to laptops, desktop computers and servers – containing chips from Intel Corp, Advanced Micro Devices Inc and ARM Holdings. Chip giant Intel issued a statement which said it was incorrect to describe the problem as a “bug” or “flaw” unique to its products. An Intel sign is seen at the headquarters for Intel Corp in Santa Clara, California. DNVGL Playbook Fit For Life. IOTA Data Marketplace – IOTA. The IOTA Foundation is thrilled to introduce an ambitious project that has been in the making since 2015. The Data Marketplace is IOTA’s most comprehensive pilot study thus far. The goal is to enable a truly decentralized data marketplace to open up the data silos that currently keep data limited to the control of a few entities. Data is one of the most imperative ingredients in the machine economy and the connected world. Data first Data is one of the most fundamental ingredients in the machine economy and the connected world.

The illustration above shows how the different echelons of this hierarchy are intertwined. Machine Economy. Chicago’s WindyGrid: Taking Situational Awareness to a New Level. Monitoring a city’s functions is like monitoring a patient’s vital signs—its transportation of people like a pulse, emergency services like a respiratory rate, and so forth. 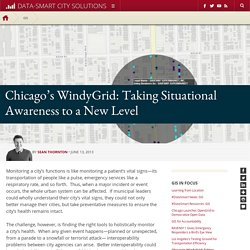 Thus, when a major incident or event occurs, the whole urban system can be affected. If municipal leaders could wholly understand their city’s vital signs, they could not only better manage their cities, but take preventative measures to ensure the city’s health remains intact. The challenge, however, is finding the right tools to holistically monitor a city’s health. When any given event happens—planned or unexpected, from a parade to a snowfall or terrorist attack— interoperability problems between city agencies can arise. About Peg. What is Peg? 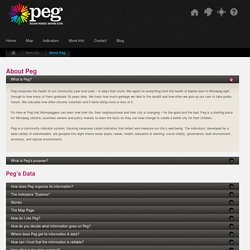 Peg measures the health of our community year over year – in ways that count. We report on everything from the health of babies born in Winnipeg right through to how many of them graduate 18 years later. We track how much garbage we take to the landfill and how often we give up our cars to take public transit. We calculate how often citizens volunteer and if we're doing more or less of it.It's here at Peg that Winnipeggers can learn how their life, their neighbourhood and their city is changing – for the good and the bad. Burgh’s Eye View. The proliferation of civic tech projects has led to a growing number of vendors who offer off-the-shelf products for cities and municipalities. 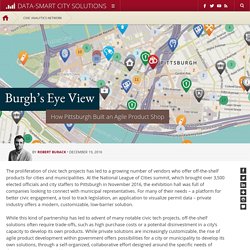 At the National League of Cities summit, which brought over 3,500 elected officials and city staffers to Pittsburgh in November 2016, the exhibition hall was full of companies looking to connect with municipal representatives. For many of their needs – a platform for better civic engagement, a tool to track legislation, an application to visualize permit data – private industry offers a modern, customizable, low-barrier solution. Taking Pittsburgh’s Open Data on the Road. Once a month in most of Pittsburgh’s 90 neighborhoods, a long-held civic tradition marches on: residents gather in church basements, park shelters, community centers, and a patchwork of other spaces to discuss community and neighborhood issues.

In Pittsburgh, these surprisingly-vibrant meetings — organized by a network of grassroots community groups and community development corporations — constitute the real texture of local civic advocacy. When Pittsburgh developed Burgh’s Eye View, the city’s recently-launched open data application, the city’s Analytics & Strategy team visited 26 community meetings in early 2017 to gather actionable feedback and share the application with the community. The audience varied in every neighborhood — some of the meetings involved standing-room crowds, and others were intimate. Commuters and Computers: Mapping U.S. Megaregions. From California’s Bay Area to the highly-integrated Great Lakes Economy, megaregions are a dominating aspect of human geography and commerce. It should be no surprise then, that 85% of corporate head offices in the US and Canada are overwhelmingly concentrated in the core cities of great megaregions.

We tend to think of cities as individual economic units, but as they expand outward and bleed together, defining them simply by official jurisdictions and borders becomes difficult. After all, many of the imaginary lines divvying up the country are remnants of decisions from centuries ago – and other county and state lines exist for more counterintuitive reasons such as gerrymandering. The billionaire philanthropists intent on using satellites to save the world.

Introduction to Data Analysis for Auditors and Accountants - The CPA Journal. In Brief The audit world is changing. Technology has transformed business processes and created a wealth of data that can be leveraged by accountants and auditors with the requisite mindset. Data analysis can enable auditors to focus on outliers and exceptions, identifying the riskiest areas of the audit. The authors introduce the process, with a review of some emerging approaches and compilation of useful resources for auditors new to the topic. The advent of inexpensive computational power and storage, as well as the progressive computerization of organizational systems, is creating a new environment in which accountants and auditors must practice. The Steps in the Process Flowcharting the process. How big data and analytics are transforming the audit. There are a number of barriers to the successful integration of big data and analytics into the audit, though they are not insurmountable.

The first is data capture: if auditors are unable to efficiently and cost-effectively capture company data, they will not be able to use analytics in the audit. Companies invest significantly in protecting their data, with multilayered approval processes and technology safeguards. As a result, the process of obtaining client approval for provision of data to the auditors can be time-consuming. In some cases, companies have refused or have been reluctant to provide data, citing security concerns. Moreover, auditors encounter hundreds of different accounting systems and, in many cases, multiple systems within the same company. Data makes you smarter: transforming your data to power tomorrow's utilities and cities. As the world population grows and more people than ever before move to urban areas, the investment in modernized utility and city infrastructure to better manage energy and water is critical.

5 Reasons Why Video Analytics is now the Big Focus in CCTV Surveillance. Video Analytics. Data makes you smarter: transforming your data to power tomorrow's utilities and cities. How Can Data Be Used to Improve Local Service Planning and Delivery? - LABCITIES. Local government and cities have a challenging job – delivering multiple complex services, which have a large influence on their citizens’ daily lives, and doing that in an environment of extreme financial pressures.

According to research by the Local Government Information Unit with The Municipal Journal, 65% of authorities expect to have to use their reserves this year. New database lets users look up their tap water contaminants. Visualizing Pittsburgh’s Property Data. Properties form the physical fabric of a neighborhood and, ultimately, a city. Planetizen: The independent resource for people passionate about planning and related fields. Western Pennsylvania Regional Data Center. Digital Counties Survey 2017: Winners Focus on Knowing When, How to Introduce New Tech. County government is increasingly leading the way when it comes to deploying technologies that matter to everyday citizens. Connected Education and the Power of Video. Cisco Blog > Collaboration. The multiplexed metropolis. EVEN thieves, it seems, now have a smartphone app. EU Open Data Portal Report: Open Data in cities. By Anastasia Panori on . Posted in Cities, Platforms, Apps, Solutions. L.A.’s New Virtual Assistant ‘Chip’ Is Making the City’s Bidding Process More Competitive - Route Fifty.