The early history of chinese theatre asian traditional theatre and dance. Chinese performing arts. Chinese mythology. The Dragon in Ancient China. Dragons appear in the mythology of many ancient cultures but nowhere else in the world was the creature quite so revered as in China. 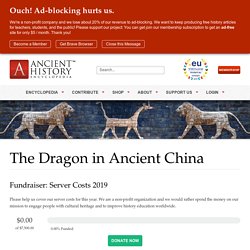 There, in marked contrast to other world mythologies, the dragon was almost always seen in a positive light and particularly associated with life-giving rains and water sources. Considered the most auspicious year sign, worn on the robes of emperors, depicted in the most precious materials from gold jewellery to jade figurines, and with countless references in literature and the performing arts, the dragon was everywhere in ancient China and looms as large today in the Chinese psyche as ever.

Origins & Physical Attributes. Most Popular Gods & Goddesses of Ancient China. There were over 200 gods and goddesses worshipped throughout ancient China, but if one were to count every deity or spirit, the number would be over 1,000. 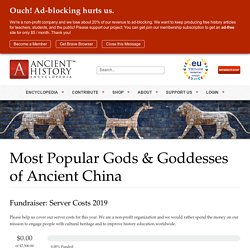 Each town, village, city, field, farm, and sometimes even separate plot in a graveyard, had its own Tudi Gong, an elemental earth spirit, who was recognized and honored. There were also spirits known as Kuei-Shen, nature spirits, who might inhabit a tree or live by a stream or preside over a garden. These were eternal spirits who had never been mortal but others, known as guei (or kuei, gui, kui), had once been human beings who had died and passed on to the afterlife.

The guei could return to haunt the living for various reasons, and rituals, spells, and religious practices developed to appease them. There were also deities who had once been mortal and now lived with the gods, such as the Baxian (Pa Hsien), the Eight Immortals of holy Taoists who were rewarded by the goddess Queen Mother of the West with immortality. Dragon Shangti. Chinese Myths and Legends - Shen Yun - Shen Yun Performing Arts. Chinese literature. General characteristics Through cultural contacts, Chinese literature has profoundly influenced the literary traditions of other Asian countries, particularly Korea, Japan, and Vietnam. 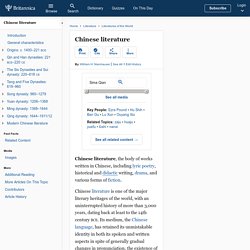 Not only was the Chinese script adopted for the written language in these countries, but some writers adopted the Chinese language as their chief literary medium, at least before the 20th century. The graphic nature of the written aspect of the Chinese language has produced a number of noteworthy effects upon Chinese literature and its diffusion: (1) Chinese literature, especially poetry, is recorded in handwriting or in print and purports to make an aesthetic appeal to the reader that is visual as well as aural. (2) This visual appeal of the graphs has in fact given rise to the elevated status of calligraphy in China, where it has been regarded for at least the last 16 centuries as a fine art comparable to painting.

Origins: c. 1400–221 bce Tien-yi LiWilliam H. Literary use of myths Poetry Prose. Chinese Literature. Chinese literature is some of the most imaginative and interesting in the world. 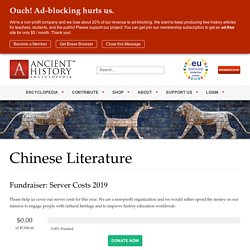 The precision of the language results in perfectly realized images whether in poetry or prose and, as with all great literature from any culture, the themes are timeless. The Chinese valued literature highly and had a god of literature in their pantheon named Wen Chang (also known as Wendi, Wen Ti). Wen Chang kept track of all the writers in China and what they produced to reward to punish them according to how well or poorly they had used their talents. This god was thought to have once been a man named Zhang Ya, a brilliant writer who drowned himself after a disappointment and was deified. He presided not only over written works and writers but over Chinese script itself. Ancient Chinese script evolved from the practice of divination during the Shang Dynasty (1600-1046 BCE).

Early Stories. Chinese Art. Nature in Chinese Culture. Chinese Art and Architecture. ART HISTORY ON-DEMAND > Cultures and Civilizations China has one of the oldest continuous artistic traditions in the world. 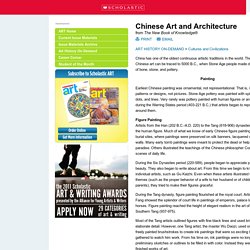 The beginnings of Chinese art can be traced to 5000 B.C., when Stone Age people made decorated objects of bone, stone, and pottery. Painting Earliest Chinese painting was ornamental, not representational. That is, it consisted of patterns or designs, not pictures. Figure PaintingArtists from the Han (202 B.C. During the Six Dynasties period (220-589), people began to appreciate painting for its own beauty. During the Tang dynasty, figure painting flourished at the royal court. Most of the Tang artists outlined figures with fine black lines and used brilliant color and elaborate detail. Figure painting continues to be an important tradition in Chinese art. LandscapeMany critics consider landscape to be the highest form of Chinese painting. Many Chinese artists were attempting to represent three-dimensional objects and to master the illusion of space. Calligraphy. Khanacademy. Chinese art. History of Chinese art. Chinese art traditions are the oldest continuous art traditions in the world. 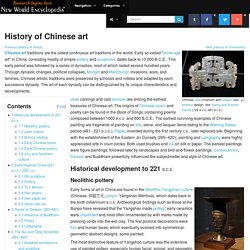 Early so-called "stone age art" in China, consisting mostly of simple pottery and sculptures, dates back to 10,000 B.C.E.. This early period was followed by a series of dynasties, most of which lasted several hundred years. Through dynastic changes, political collapses, Mongol and Manchurian invasions, wars, and famines, Chinese artistic traditions were preserved by scholars and nobles and adapted by each successive dynasty. The art of each dynasty can be distinguished by its unique characteristics and developments. report this ad Jade carvings and cast bronzes are among the earliest treasures of Chinese art.

Historical development to 221 B.C.E. Neolithic pottery Black eggshell pottery of the Longshan culture (c. 3000–2000 B.C.E.) Early forms of art in China are found in the Neolithic Yangshao culture (Chinese: 仰韶文化; pinyin: Yǎngsháo Wénhuà), which dates back to the sixth millennium B.C.E. Jade culture Pottery Notes. Ancient Chinese Art. Ancient China covered a vast and ever-changing geopolitical landscape, and the art it produced over three millennia is, unsurprisingly, just as varied. Still, despite continuous indigenous technical developments, changes in materials and tastes, and the influence of foreign ideas, there are certain qualities inherent in Chinese art which make it possible to describe in general terms and recognise no matter where or when it was produced and for what purpose.